Less 'Train to Busan' more 'Super-Shaun of the Dead', the latest alt-universe story goes for laughs, not the jugular...

Bruce Banner, fresh from Asgard,  arrives back on Earth ready to warn everyone of the approach of Thanos. But the New York he steps into is already strangely quiet… if not for long. Attacked by twisted versions of Tony Stark, Doctor Strange and Wong, it’s clear something very bad has happened even before the Mad Titan’s approach. Bruce is saved by Hope Van Dyne (The wasp) and Peter Parker (Spider-man) who reveal that an ill-fated attempt to retrieve Hope’s mother from the Quantum Realm unleashed a deadly virus that has now nearly over-run the world.

The Avengers are gone – or, at least, not feeling themselves, but some of the remaining heroes, including Bucky Barnes, Sharon Carter and Wakandan warrior Okoye may have picked up a single that could lead to a final defense against the virus and its effects.

All that is standing between them and salvation are a few million ‘undead’, some of which still have their super-powers and a hunger for flesh…

I’m sure Michael Douglas is a great guy, but someone in the Marvel Studios network clearly doesn’t like Hank Pym any more. A couple of weeks ago, Pym  – – further spoiler alert – – caused chaos to the Alt-MCU when he went on a revenge-fuelled murder-spree to ‘avenge’ his daughter’s death before the Avengers ever formed. This week, less intentionally, his careless actions cause even more death and destruction bringing a plague to the world from the depths of the quantum realm.

It all sounds good on paper – maybe even a movie! However…tonally, the whole experience feels off, as if someone pitched a really cool horror tribute with a few moments of levity but it was then decided to turn it into a comedy – and not just a few well-placed barbs and snarks but a full-on punchline-frenzy, leaving just a few key ‘ewwwww‘ moments in between to warrant the title.  (Even that title doesn’t attempt context or nuance, it’s just ‘What If… Zombies?!‘) The first obvious example is a ridiculously stupid exposition-dump in the form of a wackily inappropriate  ‘anti-zombie orientation video’ that Peter’s created with other survivors such as Bucky Barnes and Sharon Carter and which immediately robs the episode of any lurking tension. It feels like an attempted Zombieland riff but one that fails to stick the landing given the high stakes elsewhere.  Imagine if Avengers: Endgame had taken the time for such a ‘Dusted: Your handy guide to post-snap snafus’ interlude? But perhaps the epitome of this is Scott Lang’s wise-cracking head in a jar. (Yes, there’s a sentence I never thought I’d type, or want to). Firstly…. SCOTT LANG’S HEAD IN A JAR…  leaning the whole experience towards something akin to an episode of Futurama. Secondly, in the real movies Paul Rudd makes Lang a fairly likeable and brave character who simply muddles through when the stakes get high and covers up moments of tension with jokes… here’s he’s the lightest of relief (despite losing everyone he loves), funny in a forced way, almost a literal ‘prop’ rather than a character and with no real explanation on how he ‘survived’ at all.

And all the zombies here aren’t really zombies per se. Yes, it might be nick-picking given the fantastical elements (and the concept behind the original comics that inspired this entry), but the episode wants the threat to be mindless flesh-eating cannibals AND somehow still in complete control of their powers: a rotting Clint Barton still has enough sinew-tissue tension to fire arrows with extreme accuracy, a decomposing Steve Rogers can do the same with a shield and apparently fleshy-skulled Stephen Strange can still accurately spin incantations. It’s key set-pieces in search of a reason.

Following the tradition of the episodes in ‘attracting most of the original cast with one notable exception‘, the AWOL arachnid here is Tom Holland, replaced by Hudson James as the voice of Peter Parker. Whether that’s a financial or inter-studio contractual reason, it does stand out a little – it’s a passable imitation of the ever-hopeful sunny-dispositioned character but somehow lacks that genuine heart that Holland always seems to nail. This is a character that’s lost Tony Stark, Aunt May and presumably all his friends but is still acting as a happy-go-lucky friendly neighbourhood Spider-man even when the neighbourhood’s gone. (The late Chadwick Boseman does reprise a declawed T’Challa though not as a main character…)

The  story may be off, but it has some solid moments  – the short-but-sweet fight between Bucky and Steve, Hope’s last sacrifice work and a even darker version of the WandaVision coupling, act as diamonds in the rough and the script has some decent lines amid the chaos. When Peter asks about avoiding classic genre mistakes in their own game-plan and says ‘Don’t they have horror movies in Wakanda?‘,  Danai Gurira’s Okoye replies ‘We don’t need them. We have American reality shows…‘ it raises a genuine smile from the viewer and even an on-screen character acknowledging the burn. The animation varies – Ruffalo’s Banner, Evangeline Lilly’s Hope, Favreau’s Hogan and Rudd’s Lang aren’t that well-served in a less-than-accurate animated form, but the background mattes (such as Grand Central Station) are lovingly rendered. There’s a fair amount of unapologetic rotoscoping some key Marvel sequences and poses to retrofit into the narrative, but visually it’s fun and the highlight is probably a starring role for Strange’s Cloak of Levitation that assumes a life-saving attachment to Peter.

It’s another core-concept that, if played more straight, might work well as a live-action feature and there’s definitely a feeling that we’re watching a ninety-minute movie that’s been edited down to a third of  that running time and just the highlights reel or a ‘Previously On…‘ tease. And… the ending? Or, to be clear, the utter lack of one. I’m all for leaving some What ifs with more story to tell, but just as we’re getting to this poor-man’s Train to Busan and its actual ‘Busan‘ moment, we simply cut to an undead Thanos waiting in Wakanda for them and then… that’s it. Credits. It’s almost as if the budget ran out just before the climax and someone had to quickly throw a cool image on the screen with no real explanation, rhyme or reason.

Another missed opportunity that promises much, delivers on some but only rises to around half of its obvious potential… 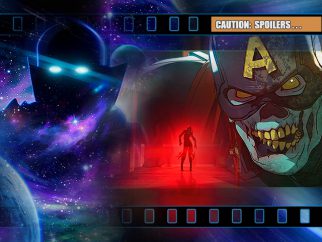