The hand-waving spells of Stephen Strange can't hide handwavery logic in latest 'What if..?'

Getting ready to receive a major award for his medical expertise, Doctor Stephen Strange is involved in a catastrophic car crash. But in another universe, he is not driving alone and the outcome is not the severe nerve-damage of the 616 continuity, but the death of his companion, Christine.

Forlorn at losing the woman he loves, Stephen Strange quits medicine and goes on a worldwide quest to find a way to reverse events. He becomes the Sorcerer Supreme, but he still aches for the loss he has endured.

Driven to change history and restore his love, Strange begins taking more and more risks and acquiring more and power, often by stealing it from its hosts. But  time is not so easily bent to one individual’s will, so just how far will this Stephen Strange go and what will the consequences be?

It’s, well…. strange that a premise such as the one delivered for this week’s chapter in Marvel’s What If? series should be so rich in possibilities and yet disappointing in delivery.  It’s handled like an epic and profound emotional tragedy, as if we’re watching one of Marvel‘s cornerstone romances being ripped asunder by a fickle and vindictive multiverse. Losing someone and working out a way to get them back is the staple of many a classic tale, inside and outside science-fiction. But the truth is that however decent Rachel McAdams was in an undeveloped role in the live-action Doctor Strange film, there’s likely a good few people who couldn’t even remember the character’s name ( for the record, it’s Christine Palmer) and thus the stakes here just don’t feel as high as they should. Even back then, Christine was a fellow physician and, it seemed, one of Strange’s failed dalliances… a colleague or a friend at best and not a serious romantic life-partner contender, (though she ultimately saves his life before being written out once again). Here, she’s somehow already the love of his life, even before fate deals them a very different hand. Yet we  only see that depth of emotion after Strange’s original car accident  – one in which he doesn’t damage his nerve-endings, but that claims Christine’s life.

In something of a narrative convenience, Strange still travels to Kamar-Taj in Nepal. In the film this was a self-centred quest after speaking to a man who had fought back from crippling injuries to live a normal life and with Strange hoping to discover the means to a similar recovery. But why he’d make such a journey under this new continuity, rather than bury himself in his work as would be far more likely – and then still be offered training by the notoriously fickle Ancient One – seems at odds with everything this is based upon. He says his mission was always to find a way to travel back in time and alter events, but that seems like a one-line fix to obscure the fact that most of the feature film’s set-up gets handled in about ten seconds of animation early in the episode and is then all ‘off-camera’. For any of this to work, one has to presume that this version of Strange felt so deeply about changing the past that he was willing to make that journey, put all his feelings for Christine aside for the duration of the movie’s presumed events where he actually becomes the Sorcerer Supreme by learning some humility and the importance of NOT screwing around with his powers and then immediately starts moping around again immediately thereafter and starts doing just that. That feels like lazy writing.

Every time Stephen – an obsessive, compulsive and privileged man by any measure of it – tries to change the past, Christine still dies – either in the car accident, by a mugging or some sort of malady at a dinner. This ultimate fridging sport gets so repetitive that you wonder if she would next slip on a banana-skin that the Watcher left lying around when he was watching but not interfering. (It’s also baffling as for all the talk of an ‘absolute’ or fixed point’, we know there’s at least one version of this story – the movie – where events are NOT inevitable!) That Strange then gets more and more desperate to save Christine and the stakes get higher sound okay on paper, but on screen just  feels like a decent single-line pitch extended beyond its natural length. The half-hour chapter is basically padded out like a death-spiraling Final Destination episode with universe-swallowing consequences and added tentacles. (Slithering Lovecraftian gods return to the guest-star mix  – last seen dragging Captain Carter into another dimension – and one wonders if such creatures will play a significant part in Marvel‘s Phase Four dalliances with a Multiverse of Madness and what lies beyond… or whether Strange’s overt arrogance over spellcasting is tied to similar moments in the upcoming  Spider-man: No Way Home.)  More accurately, even before events diverge, this simply isn’t the Stephen Strange of the movie – it’s a character with a similar face and voice squeezed and contorted to fit into a What If..? scenario that never makes a huge degree of sense.

There’s high-stakes but no momentum here, just the illusion of momentum, as we constantly circle of an ever-darkening deja-vu event horizon that then collapses in on itself. The reveal that there are two Stephen Stranges – each inhabiting the exact same universe but on different paths and never encountering or knowing about each other, all courtesy of The Ancient One –  feels like an unlikely last-act-switcheroo, an illogical Shyamalan tweak to the story and the fact that this drum-roll moment ultimately doesn’t have a significant degree of impact on the final outcome feels wasteful of yet more screentime as we fade to black. The dour lesson: you can’t play takesie-backsies with the Watcher. Stakes-wise, this feels like it should be edge-of-your-seat Avengers: Endgame-level stuff (and the premise might work as a movie) but instead just makes you want to slap Strange for taking entitlement to a cosmic level.

Again, most of the original cast are back… Cumberbatch voices Strange but given that the actor’s non-British cadence for the character always felt a little off in the film, his return is one of the few times an original actor’s participation seems less than completely essential. McAdams reprises Christine and is given more screen-time, Benedict Wong is all right as Wong and Tilda Swinton yet again essays The Ancient One only weeks after agreeing that her portrayal of the character (an old Asian man in the source material) was probably racist white-washing she regretted.

Frustratingly, there’s huge potential here and it’s interesting that an episode which goes darker than the more positive aspects we’ve seen so far from this show (here with a very bleak ending indeed) and could have had real impact… has connective dots that simply don’t work and what feels like a great idea also feels like a short-hand, first draft: a solid premise needing a longer feature-film treatment or a rewrite to fill its current shorter length more creatively rather than repetitive set-pieces.

It’s all a bit strange. But not nearly enough. 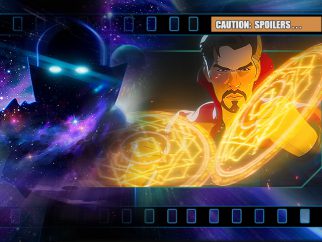 7.3
'What If... Doctor Strange Lost His Heart Instead of His Hands? (Disney+ review)
Tags
Benedict CumberbatchDisneyDoctor StrangeMarvelWhat If
Categories
DISNEY+ REVIEW
SHARE THIS ARTICLE
OLDER ARTICLE