The team face real problems when forced to abide by a vow of silence during a troublesome investigation...

Kristen, David and Ben have been asked to visit a monastery in Upstate New York where the church wants to evaluate at least two miracles that have been claimed. The first is a monk whose body has somehow remained perfectly preserved for months, the other being stigmata seen in the hands and feet of a young nun, Fenna. Unfortunately for the team, the monastery has a strict vow of silence within its grounds. There’s a cabinet on the premises said to contain an ancient devil and it remains locked away from the world only by the nature of the monks’ silence. A single word spoken, it is claimed, will set it free and so the vow of silence has been upheld for over a century.

None of the team are happy with the way they are treated, especially Kristen, whose presence is barely tolerated – though she forms an instant connection with Fenna.

But a swarm of flies, open misogyny and homemade liquor are about to bring to light some unspoken truths…

There are plenty of ‘stunt’ episodes that find their way onto a series’ schedule, differing slightly from the regular format in an effort to grab some attention. The ‘musical’ episode has become a familiar stunt-week staple of normally serious dramas and ‘bottle shows’ (using one set or reduced cast members in an extreme and specific situation) are increasingly commonplace.  It might be tempting to think that Evil , returning after a month-long sabbatical, chose to do a largely ‘silent’ episode as just such a gimmick, but the  result – managing to crank both serious tension and grand humour from its premise – belies that suggestion. In fact, quite the contrary, it would seem that a lot of real thought was put in to making this not so much an atypical episode as an organic standalone that also one demonstrates and embraces the show’s specific, innate, signature strengths of irreverent faith, in both the darkness and the light.

This may not be quite as stellar as Buffy‘s Hush episode, one that also dealt with silence, but it’s still one of Evil‘s best to date and a hugely enjoyable hour or so of television, grounded in a solid mix of awed faith and ewwww science. Directed by series co-creator Robert King, there’s a deft touch, making you laugh out loud one minute and shift uncomfortably the next. What works here is that though there’s fun throughout, almost all the enjoyment comes from the awkward situations that ring true, even outside the realms of the more fantastical. The show deals with the obvious communication difficulties, when you can’t actually talk, in a variety of ways from the outset. There’s mouthed questions, some sign language (W.T.F.???) and a range of eyebrow-raising expressions that say more than words. There’s hilarity as Kristen (Herbers in fine form) first pretends to flash the monks in revenge for their sexism and then gets slowly, silently sloshed when she’s banished to help clean out the wine vats, exchanging non-verbal cues with a more welcoming and mischievous young nun Fenna (an excellent and instantly charming Alexandra Socha). Mike Colter’s David struggles to focus his mind during one of the meditation sessions (as viewers, we get to see his thoughts typed out on screen as they dance between randomly observing the chapel around him…is that a vomit stain on the floor?… to abject but hilarious unspoken profanity as his frustration grows… to some brief and suspect thoughts about Kristen (thoughts we see likely, if deniably reciprocated in her own imaginings).

But as fun as they are, there’s also some subversive darkness when Kristen is forced to sleep in a room full of intimidating statues that may or may not be coming to life, Harry Harryhaussen style – and scaring her and us. ‘Boo!‘ has never had bigger consequences. The idea of something (literally) unspeakable being locked in a cabinet that can be opened by a careless word and the act of having to sleep with a gag in your mouth to prevent accidental mutterings are unnerving concepts and well played visually. It’s Ben (Aasif Mandvi), reliable as ever, who is terrified by an experience in the catacombs, but manages to get some answers through science and his google-fu… even his investigations don’t seem to answer all the mysteries presented here.

Once again, the supernatural aspects hang like a decorative shroud, but it’s the character-development and subversive tone that continues to resonate.  It’s good to have Evil back and if the rest of the season is as good and assured as this, we’re in for something heavenly… 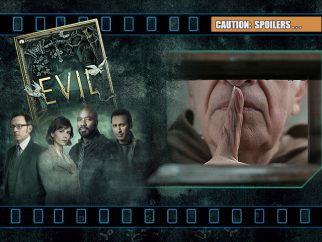