Who is killing the Earth's mightiest heroes and will Nick Fury be able to uncover every minute detail..?

Nick Fury wants Tony Stark to join his Avengers Initiative and over a post-hangover coffee at Randy’s Donuts they are set to discuss the matter – though Stark seems fairly uninterested in the prospect. To sweeten the deal, Fury gets Natasha Romanoff (the Black Widow) to inject Tony with a cure for the palladium poisoning he’s suffering because of the reactor he’s got in his chest… but to Stark and Romanoff’s horror, Stark keels over… he’s dead.

Natasha is arrested, though Fury knows she must be innocent. A short time later a powerful force draws Fury and Agent Coulson to the desert in time to witness the arrival of a man with ‘very beautiful hair’. But as Clint Barton (Hawkeye) watches, his bow and arrow primed, Barton appears to shoot the stranger dead… Thor of Asgard has been felled even before he made his mark on Midgard.

Barton swears he didn’t fire, but when Barton himself ends up dead hours later, Fury is convinced that someone or something is undermining his Initiative plans before they’ve even come together.

The latest episode in Disney+/Marvel‘s alt-history series does  an intriguing job of not only tying itself to the events of several existing mainstream  Marvel films, but also the oft-forgotten continuity of much earlier Marvel films and also the problematic printed-page persona of Hank Pym.

The killing of one founder-member Avenger after another – even before they became founding members – is an intriguing place to start and it’s a good halfway into the running time before there’s even any clues as to what’s going on. Given that some may have known that Loki / Tom Hiddleston would appear and play a part, one might assume of some nefarious, pre-emptive agenda by the Asgardian to conquer Earth, echoing some of the incidents in Marvel‘s ‘Ultimates‘ reinvention. However, while there are some developments in that theory, it’s clear with the death of Thor and Loki’s emotional reaction to his brother’s demise, that Loki isn’t the mover-and-shaker of events and the viewer will have a fun time working out the culprit before the reveal. It’s the kind of story that might make a legitimate movie and, if anything, the thirty-minute format limits the canvas and some of the further character-development that would have served the premise well.

Many think that the modern MCU started with the mega-success of Iron Man, but before that came the 2003 Hulk (the Ang Lee movie with Eric Bana) and the 2008 Incredible Hulk (the Louis Leterrier film with Edward Norton) versions of Bruce Banner and his alter ego. The post-Iron Man films have acknowledged some of the contradictory events of those previous films but kept them at arm’s-lengths since Mark Ruffalo assumed the Banner role. However the events in this What If… chapter clearly echo the scenario in the 2008, even down to the inclusion of Betty Ross (this time voiced by Stephanie Panisello) and with modern Hulk Mark Ruffalo on voice-duty for the emerald behemoth – though this is a story with a very different outcome. In the MCU, Michael Douglas has portrayed Hank Pym – the original inventor of the Ant-Man suit – as a irrascible but generally principled and decent man. Long time comic fans will know that Pym’s printed-page continuity is somewhat less perfect. Though a founding member of The Avengers, it was he who later created Ultron (not Tony Stark) based on his own brain-patterns and whose marriage to Janet Van Dyne fell apart when he had a mental breakdown with revelations of abuse towards Janet. Nowadays, that might have been seen as a topical reaction to the #metoo movement, but these comics dated back to the 1980s rather than the 2020s and were a radical ongoing storyline at the time – one from which Pym has been slowly but not completely rehabilitated over the decades.  It’s that unbalanced-version of Pym that ultimately makes his appearance felt here.

Nick Fury is often centre-stage, voiced by Samuel L. Jackson and a majority of the big-screen actors reprise their roles (including Michael Douglas, Tom Hiddleston, Jeremy Renner, Clark Gregg, Frank Grillo and Jaime Alexander) in animated form. yes, there are notable exceptions.   Mick Wingert briefly essays Tony Stark quite effectively, Alexandra Daniels gives a few words as Captain Marvel, Mike McGill gives us Thunderbolt Ross and with Scarlett Johansson never likely to reprise Natasha Romanoff / Black Widow any time soon, Lake Bell (who plays Poison Ivy in Harley Quinn‘s own animated series) takes on the role. There’s some good use of humour, especially early on. In his limited screen-time (and with nary a word from Chris Hemsworth) everyone – everyone – seems enamored of the mysterious stranger -Thor – and his hair and there’s some jokes at Coulson’s expense, especially with the revelation of his top-secret password (Hashtag-Steve-Steve-Steve-I-Heart-Steve-0704).

Yes, the running-time and some narrative decisions mean that there are some missed opportunities along the way and the larger developments outside the main ‘whodunnit’ angle seem a little tacked on to suggest bigger developments than actually needed. The animation is good if not quite as on-the-nose as the previous two chapters – though a sly transition between Fury and The Watcher speaks to one story from Marvel Comics that saw Nick change roles on the printed page.

But this is one for the die-hards who love older continuity as much as recent outings and on that level it still delivers well. 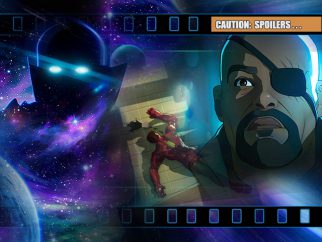