Ego, the Living Planet sends a team of ravagers to retrieve his son from Earth, but in this alternative timeline Yondu delegates the job to his underlings, they return with the wrong child – but it’s hardly their fault, right… the child they brought back fits the description: two legs, two arms, two eyes, two ears. It’s an easy mistake to make.

The young boy they’ve brought back instead of Peter Quill is actually T’Challa, heir to the kingdom of Wakanda, a young boy whose dreams lie beyond his country’s secret and enclosed borders.  Whisked away into space and with Yondu telling him of his country’s destruction while he’s gone, T’Challa doesn’t grow up to be the Black panther, but the enigmatic Star lord, a legend throughout the cosmos as a fast-talking, smart operator who has evolved into am altruistic swashbucker who always helps the underdog. A man with such a gift of charisma that he talks down a Mad Titan and makes him a colleague.

But one day, Nebula comes calling… she has an offer he cannot refuse and it is one that will change T’Challa’s life once again…

The second chapter in Marvel Studios’ What If… series is the one that’s arguably had the most anticipation –  a story featuring the late Chadwick Boseman in his last role, reprising the role of T’Challa, albeit in voice only and in a different version of the character we met in the live-action movies.

Boseman, as ever, is great and without the heavy-weight of the royal mantle and tradition, it’s fun to see him give T’Challa a sense of free-range humour than the gravitas he’s been shown to shoulder previously. Back in the day, the Star Lord character was a relatively serious addition to the comics pantheon of Marvel’s cosmic characters on the printed page, but the modern MCU interpretation has been a far more loose. Chris Pratt  version of the Star Lord / Peter Quill character is played as ironic – a shlub made good and whose reputation isn’t half of what he would like it to be. However the Boseman/T’Challa incarnation oozes a confidence that’s hugely deserved and whose reputation has even apologetic opponents and villains asking for mere permission to engage him in combat. It’s still ‘fun’ and giving a wink to the audience, but it feels like Star Lord given actual respect rather than punchlines.

The idea of Thanos (John Brolin, again) as something of a lackey takes a bit of getting used to – the cosmic demigod having been simply talked out of his plans for galactic decimation and now just another associate of the ‘Guardians’ like team of Ravagers (though the ‘Mad Titan’ still wonders from time to time if he should have gone the annihilation route).

Michael Rooker reprises Yondu, a slightly more benevolent figure than his late MCU counterpart though with snark and weaponry still intact. Benicio Del Toro returns in style as The Collector with far more to do than his previous appearances. Djimon Hounsou as Korath, John Cani as T’Chaka, Danai Gurira as Okoye, Sean Gunn as Kraglin Chris Sullivan as Taserface, Ophelia Lovibond as Carina, Carrie Coon as Proxima Midnight, Tom Vaughan-Lawlor as Ebony Mawall reprise their roles and there’s also Seth Green giving Howard the Duck more lines than ever. Karen Gillan reprises her Nebula, but though the face is clearly based on the actor,  it’s almost impossible to get over the blonde-hair and different demeanor, making the character almost unrecognisable at a glance. (Her ‘Cha-Cha’ name for T’Challa is fun, though). David Bautista doesn’t reprise his role as Draxx (here voiced by Fred Tatasciore). The director claims he believed Bautista had been approached, Bautista denies it… It could be a time/money/contractual thing – after all, Disney contracts seem to be a bit of a thorny issue at the moment. However some of the other ‘cameos’ are of similar size and was Kurt Russell really only brought in for one line?

There were apparently plans to come back to this version of the Star Lord character in the show’s second season (in a similar way to plans for Captain Carter) which are now obviously in question. Technically, Boseman’s voice will be heard in forthcoming episodes of the series as other alternate versions, but only briefly and not in a central role… but as a fun entry, a tribute to Chadwick Bosemanin and a self-reverential romp through a slightly-twisted MCU with continued strong animation and a sense of whimsy, this second What If..? keeps up the quality and potential. 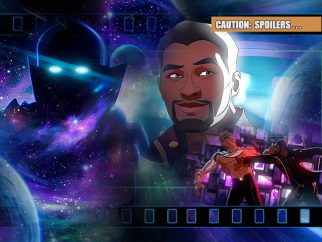