The 'non-player-character' is the 'most valuable player' in Ryan Reynolds' crowd-pleasing 'Free Guy'...

Guy (Ryan Reynolds) gets up every day, wishes his pet goldfish a nice day and goes to work at the bank… which invariably gets robbed, though he always survives the carnage There’s only one rule for Guy and Free City… ignore the people in sun-glasses… they’re the ones who  get all the action and fast-paced, quickly-reset destruction. Everyone else… just goes about their business. However, Guy quietly dreams of something better and when he sees a unfamiliar face on the street he decides to follow her. But ‘Molotov Girl’ (Jodie Comer) has some secrets she’s not inclined to share and other places to be… and not even Guy’s new sunglasses can stop that.

Elsewhere Millie exits the global phenomenon that is the Free City computer game, partly charmed by the other ‘player’ she’s met in there, but determined not to be distracted from her job of saving the computer AI program she built from its nefarious new owner, billionaire Antwan (Taika Watiti)… who intends to wipe it all clean and create anew project based on the work of Millie and her colleague ‘Keys’ (Joe Keery).

If you look at a movie and find it easy to describe it as ‘X meets Y’, citing other ‘hard-to-beat’ classics, it’s often a double-edged sword. Homage and rip-off are close stable-mates and Hollywood, let’s be honest, isn’t known for its original ideas when there’s simply an opportunity to do something that’s, y’know, like that other thing, but with a twist.  But in the case of Free Guy – though the touchstones of Tron, Ready Player One, Groundhog Day, They Live and The Truman Show are impossible to ignore – the final result is the sum of its best parts and delivered with such glee and heart that it’s hard to think of a better summer blockbuster for the year – even in an era where there’s hardly been a lot of competition.

Ready Player One might have been the yardstick for pop-cultural in-jokes, a veritable tsunami of references and screen-filling icons, but it’s sprawling, pixelated and over-packed canvas lacked the one element that Free Guy has in abundance – pure heart. There’s plenty to enjoy in the background of Free Guy if you’re looking there but the foreground keeps you fully entertained.

One of the reason this film works so well is the casting: getting central performers who are given the opportunity to simultaneously play to their strengths but also against type. Reynolds is consistently underestimated as an actor, sometimes written off as ‘that crazy, fast-talking guy’ (a moniker, to be fair, that he hasn’t fought) but there’s very few performers who can pop that self-important bubble at their own expense and still let the audience reap the madcap rewards. As one friend described him, he can be the puppy who pees on the floor to get attention, but is instantly forgivable because he doesn’t mean actual harm – quite the opposite. He’s more than free-flow banter and sardonic dialogue (at which he’s a master) and it’s no accident that despite the chaos swirling around him, its Reynolds who almost always keeps some element grounded. He’s the guy we’re always actively rooting for in everything from The Proposal to The Hitman’s Bodyguard and here ‘Guy’ is the anti-Deadpool, a pleasant, initially complacent unassuming, non-violent and joyful guy who learns to be a more rounded and empowered creation, while still yearning to keep those ideals.

The massively-talented Jodie Comer, whose breakthrough role was as Villanelle in Killing Eve, is equally inspired casting and taps into a less acerbic, more family-friendly but still ruthlessly driven action-heroine persona and marries it with doe-eyed, hopeful programmer, essaying both with a sense of fun. (That she will also feature prominently in the upcoming Ridley Scott period drama The Last Duel, exercising a very different set of dramatic muscles, shows her true range). She’s clearly enjoying every minute. Stranger Things‘ Joe Keery provides good support. Taika Watiti, for once not on directorial duties, goes for broke in the ‘villain’ department, the exterior force and antagonist chewing scenery like candy. Comedian Lil Rel Howery also acts as a good foil and Alex’s best friend in the game.

There are running gags and some formula set-pieces, but they are the kind that celebrate the template rather than lazy sequences built as padding. They’re safe without being boring.  Yes, the pacing is just a little off – the film could probably have shaved about fifteen minutes – but there’s momentum through most of it to keep the audience involved. The climax is wonderful – and without spoiling too much the emergence of the Disney/Fox/Marvel empire allows some references and nods which will have you smiling or applauding rather than groaning under the deluge of such elements that often over-pack such a film. Also watch (or, in many cases, listen) for cameos as Reynolds and director Shawn Levy call in some superhero favours.  Alex Trebeck also makes an appearance, his scene all the more poignant with the film’s belated debut (originally summer 2020) meaning it comes after the famous host of Jeopardy‘s hosts passed away last year.

All in all, the film’s format and delivery handles the balance between providing action and bloodshed while simultaneously lampooning and waving a finger at the harsher side of video-games, pretty well. It could easily exorcise the occasional profanity and easily be even more accessible than the already useful PG-13 (though, nowadays, it’s probably relatively inoffensive, anyway and you’d have to be worryingly askew to complain too much about when the film’s more powerful but entertaining message is about the little-guy needing protection from too much cold, corporate, money-making which is far more relevant) … but as things stand it’s still close to a modern  family-friendly outing that provides a great antidote to the greys and bad news cycle going on elsewhere… 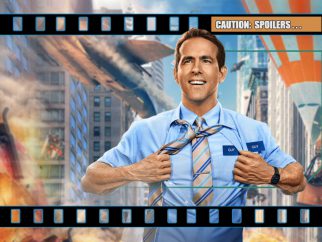