The varied colours of authority come under scrutiny in an episode with no easy answers about real justice...

When a police-officer involved in a shooting claims he may have been possessed, the team are skeptical to say the least. But further investigation suggests that, unearthly or not, there may be forces at work within powerful sections of the police-force that protect and serve their own interests.  It doesn’t make easy reading or sense to Ben, david and Kristen, especially with their own varied experiences, but they are about to find out that friends in high and low places can make things easier or harder and sometimes it’s hard to tell the difference.

Never one to shirk away from modern maladies and current issues – especially this season – Evil really couldn’t get much more topical than a case involving a white cop shooting a black suspect. But it’s interesting that the writing is sufficiently clever to play against some expectations. Kristen, David and Ben mostly have the same reaction as a lot of the general public might when the church asks them to look into a case where a cop’s actions and judgement at a traffic stop are called into question. Essentially: Why is the church getting involved? The answer… because the cop is claiming he was sure he saw a gun and that the fact there wasn’t one found at the scene might mean that he was ‘possessed’ in the moment to take the action he did. Cue that look of disbelief and possibly actual offense crossing our team’s faces and that of the viewers.

Once again the show takes a topical theme and spins it off in a slightly different and interesting direction, perhaps deliberately (or conveniently) not having to (or being able to) fully answer the main thrust of its incendiary premise. The episode isn’t so much about whether the cop was possessed (as viewers, we certainly glimpse a gun), but in the reactions the incident and the defense causes thereafter… looking at both the prejudices that might add weight to opposite/both sides of the argument and also to potentially wider corruption about how people will band together to turn a blind eye. On top of that – and perhaps spreading its critical eye a little too thinly for one singular episode – we’re then asked to consider that both a singular demonic sigil indicating extreme forms of brotherhood and the popularity of violence on a tv cop show might be influencing some real life boys in blue. Those are some heavyweight considerations and a forty-four minute entry probably doesn’t have the full infrastructure to hold it together as well as it might. But Evil gives it a good try. One can’t dispute the reality of the discussion where both David and ben discuss the many times they’ve been pulled over in just a year and Kristen notes it’s never happened to her.

Kirsten also has something of a reckoning when she’s visited by the ghost of LaRue (or at the very least, a vision summoned by her subconscious) and ‘fighting’ with him in her yard. The police turn up and only find Kristen, but that leads to her confessing to friend Mira that she murdered him. It looks like Mia already had her suspicions (and, frankly, the one failing in the show’s logic is the fact that Kirsten wasn’t one of the number one suspects in the investigation) but that – perhaps surprisingly – she seems completely willing to let it slide, noting that she’s already told her superiors that there were so many people who wanted LaRue dead it was unlikely they’d ever solve the case. Given the idea of guilt and fluid morality are ideas built in to the show’s DNA, it seems unlikely that this technical side-stepping of justice will be the end of the matter… especially as it looks like someone innocent might still be wrongly implicated. There’s little doubt that Kristen killing LaRue stopped him committing more atrocities, but it hardly absolves her of the action – the more interesting question will be whether her actions were wholly her own or whether she was unduly influenced by something unholy. (Mira’s comments that she’ll explain away Kristen’s panic call with “We’ll just say there was a black man in the yard and you were scared and that’s gonna just solve everything…” is a throwaway line that might be the most chilling of the episode.

Speaking of unholy things, Sheryl taking spiritual advice and offering ‘sacrifices (even if it’s only $1 bills) to a creepy looking doll called ‘Eddie’ is just… well, creepy and more worrying still is her attempt to bring grand-daughter Lexis into the fold. It’s quite clear that since her break-up with Leland, things have not gone well for Sheryl and even if Kristen isn’t under some diabolical influence, then her mother absolutely is. Quite where it’s heading is still uncertain, but however much we cheered Sheryl’s takedown of Leland, there’s definitely something to be even more worried about now.

We also have a revelation of sorts about Ben – a character who’s fun and interesting but whose backstory has been little more than ‘sardonic tech-guy who isn’t really religious’. We find out that the night terrors he is experiencing might be connected to one of his past jobs. It turns out that the genetic research he was involved in was subsequently discovered to have severe side-effects on unborn babies and it’s clear that while Ben may or may not have been directly involved with decision-making at the time, he certainly has unresolved issues that he hasn’t spoken of before. And if you don’t believe in God, then of whom do you ask for forgiveness?

There’s a lot of unsettling, societal observations in this episode and thoughts about the human condition – its morality, its fight-or-flight instincts and the difference skin-colour can make to varying degrees when it comes to justice… and though they don’t coalesce into the perfect whole, it’s all certainly provocative and compelling to hear a mainstream show (albeit now on a streaming platform) give voice to such.

Evil takes a month-long break now, but will be back at the end of August. 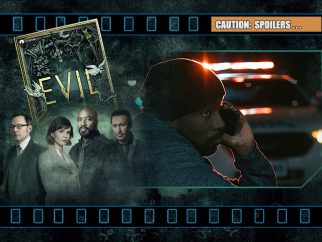