In 'E is for Elevator', the team investigate the disappearance of two teenagers who vanished without trace...

With the team all facing their own distractions, they apply different attitudes and theories to the story of two teenagers who went missing while playing ‘The Elevator Game’ – the belief that pressing  the floor numbers in a certain order will transport them to Hell. The building in question has an interesting history, but there seems no way to prove the urban myth or recreate the effects.

There are a few character choices in this episode that feel… off. It’s hard to say whether it’s the intended subtleties of our ‘heroes’ being off their game because of influences beyond their control… or whether there’s just some ‘idiot-box’ writing (The phrase meaning that a character does something stupid for the sake of the plot that goes against their usual sensible reactions).  Kristen is investigating  the ‘Elevator Game’ where several people have gone missing after journeying in said vertical transport in their urban-myth efforts to visit ‘Hell’…and she takes her kids along with her. Cute and funny and as realistic as her family unit can be (a lovely counterbalance when not facing the more scary elements) it seems like wholesale bad parenting to bring her children for something she has to know is at least potentially dangerous.  Equally Ben makes a really silly, fundamental mistake while running his own investigation into the elevator. He steps out of the elevator without securing the door is kept open (thus trapping him) and though the ramifications are dramatic and a real ‘moment’ for the character’s development, it does seem like something Ben would have been more careful to prevent. Compared to these moments, David punching a fellow trainee-priest feels almost on point.

Evil likes toying with overtly exploring and subverting urban myths, the very idea of scary stories that might have different explanations depending on your viewpoint. Though there’s technically a technical aspect to the ‘explanation’ here, the embroidery of elements around it continues to prickle the hairs on the back of your neck. The story of the ‘teka teka girl’ plays into both the absurd (I laughed during the original exposition), but also evolves/devolves into something genuinely creepy with the show’s (as always) impressively disturbing production values – the injured girl pulling herself along the floor is as good an image as any recent horror movie. Take that alongside Ben’s recurring, sardonic, wise-cracking ‘demon’ and the show continues its expert way of juxtaposing and joking about the sacred and the profane.

To balance out the horror and the humour, there’s also some social commentary, with David feeling that the church he wants to serve is often more self-serving, steering away from real issues of the day. When he wants to talk about matters of ‘race’, a fellow black student notes that David seems to be being groomed as a ‘token’ presence and when he attempts to talk to a congregation about slavery and America’s ‘Original Sin’ it’s clear that his superiors would much rather he deal with more basic platitudes and homilies.

After his absence last week, Michael Emmerson as Leland is used sparingly but is delightfully disrespectful. He’s a walking, talking paper-cut of a man, prodding and gently slicing with his words, though it’s been nice to see Leland wrong-footed on several occasions rather than just an almost omnipotent malevolent force and the series is developing his foibles nicely. There’s definitely something up with Sheryl, Kristen mother, still being wonderfully played by Christine Lahti. She’s determined to spend as much time with her grandchildren as possible, which a season ago would have been normal – but there’s an earnest tone about her now and something certainly askew after her encounter and break-up with Leland – though it’s hard to tell exactly what this as as yet.

Evil is the kind of show where there’s degrees of text and subtext. While the likes of shows like Loki wear in-jokes like pantomime regalia, Evil‘s influences are there but more subtle. The titles of books on the shelves are worth researching for their importance, not just as a gimmick but to the themes involved. This week’s news is that Evil will take a break after its current run of six episodes (taking it to 25th July) but will return 29th August for the seven remaining episodes  – and  a third season has now been given the green light based on the positive reaction to the latest run and the move to Paramount+. 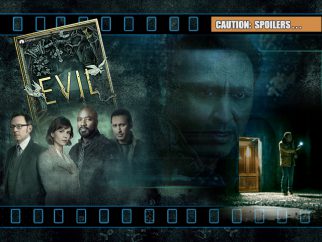