After the events of A Book of Bones, the repercussions of the actions taken by Charlie Parker, Louis and Angel in Europe have finally started to ripple out. The Vuksans – two brothers whose legendary brutality across Eastern Europe and the carnage of the war in the old Yugoslavia (and beyond) has made them feared and wanted in equal measure – decide to punish some of the people who cost them part of their power. That does not bode well for Louis and Angel’s Amsterdam-based ally DeJaager or anyone who moves in that circle.

For Angel and Louis, the personal and professional partners who have watched Charlie Parker’s back for so long, it is a brutal aggression that cannot go unanswered and which will require them to leave the US for a return to Europe. But with political, historical and geographical obstacles and international agendas both old and new, they find themselves caught between people who will offer formally-deniable help and those who would rather avoid further bloodshed on their doorstep.

There are five killers that Angel and Louis are hunting… but, unknown to them, there’s also a sixth and they represent a much older threat…

There seems little doubt that Irish writer John Connolly occupies a unique position in the world of writers. His blend of procedural and preternatural in his books (often featuring driven and tormented investigator Charlie Parker) allows him to address both the world outside our window and the world just beyond the horizon, often a dark one full of foreboding. It’s been over two decades since Every Dead Thing introduced us to this world and the blood and words have flowed fairly steadily and satisfying ever since.

I will say that if you haven’t read Connolly’s work before and you want to understand his success, The Nameless Ones demonstrates his writing style but probably isn’t the book with which to begin to explore this web of intrigue on a narrative-level. Again, that’s not to say it isn’t well-written, Connolly is still one of the masters of the game, merely that it feels like the author taking a diversion and scratching a specific itch, one that upturns most of the dynamics of his other titles and produces an outlier to that grim and dangerous world in a different way.  If the Charlie Parker books are about a investigator haunted by sorrow, regret and loss and facing dangers of a kind that go beyond normal boundaries – occupying an unique, deeply intense and satisfyingly twisted mix of genres, with stories and chapters that refuse to capitulate to more mainstream whims – then The Nameless Ones is a revenge thriller and a pondering on the brutality of the human condition… it feels more like a cross between Welcome to Sarajevo, Smiley’s People, Shooting Dogs and  John Wick. It’s Le Carre with a smidgen of Lovecraft: there are monsters here, to be sure, but all too often of the human persuasion.

The Nameless Ones is a war-story, or more actually, a bloody-aftermath-of-war story. Actually knowing someone who escaped the Serb/Bosnian conflict, I also know how overlooked that time of human carnage was (and somewhat continues to be) and how quickly time has passed since it was in the headline news every night – though its legacy still haunts like it was yesterday for some. The Nameless Ones feels like a reminder, a wake-up call to the all-too-true grotesques and atrocities… one that is earnest in the intent of its telling, but a reference book of detail in its result with a plot running adjacent. The horrors of the massacre at Srebrenica do not so much lurk in the background as stain every page, informing the priorities and sometimes inhumanity of man even without ethereal darkness. Connolly clearly loves unwrapping and embracing real history as much as his rich and articulately-hued language demonstrates, but there are times in his longer books where that empirical research consumes whole chapters at the cost of pace, giving the feel of delivering a university thesis rather than a novel. Minor details can be given the same weight as important plot points and while that can work to imbue the author’s locations, characters and dilemmas with a rare and subversive real-world authenticity, it sometimes feels like Connolly has meandered off or included footnotes in the main body of the text.

Largely billed as a Louis and Angel book, their banter is a delight – but it’s disappointing that the two personal and professional partners actually have less time together then you’d hope for – separated for a significant part of the latter half of the book by the needs of divide-and-conquer planning for their revenge mission across Europe. They are both interesting, complex, morally-questionable in their methods but still righteous characters who are served best when they are together – their conversation and connection brought to wonderfully tarnished and bruised life by Connolly, raising a smile at the same time it quickens the heartbeat. The scenes where they are together – especially with housekeeper Mrs. Bondarchuk – sparkle more than the time apart. The appearance of Charlie Parker himself much later in the book – this time he’s the cameo, supporting player – somewhat underlines the familiar touchstones that we’re missing here and which usually give the series its central strength.

If you want a very politically-aware and bloody story of revenge and a trek across the darker corners, streets and alleyways of a real and thematic European underworld – that sometimes inches just beyond mortal borders – then The Nameless Ones is a complex and labyrinth page-turner, a Game of Thrones within a real-world landscape (and, despite the book’s title, littered with names full of acute vowels and deadly diaeresis)… though entry-level newcomers might wonder at the importance of the Parker family appearances here that seems to be more of a regular-reader safety-net than important to this book’s plot. If you were expecting an outing more in the vein of those main Charlie Parker-centric books,  then your mileage may vary. It’s good to push at the boundaries of a world to test its foundations and convictions, which remain strong, but equally risky to venture too far off the path, however assured your footing and mission.

The Nameless Ones is not an easy read – its unforgiving depictions of violence and cruelty and with its ‘villains’ taking up more pages than the ‘heroes’, make it tough to work through – but it is a powerful and provocative thriller, nonetheless… simply not the specific horror story you might have expected.

‘The Nameless Ones‘ is published by Hodder and Stoughton in the UK and is available now. It will be published in the US on 12th October… 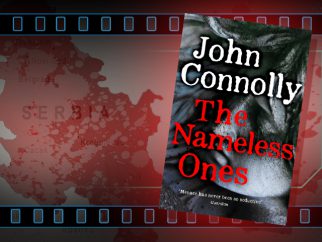