It's not the destination, it's the 'Journey in Mystery'... but penultimate 'Loki' runs on easter-eggs and visual gags...

Loki has been pruned from existence but that might not be the end of the story… with Loki waking up to be met by more Loki variants, all trapped at the end of forever, surrounded by meta-debris and waiting to be gobbled by a giant smoke-monster built to ensure they never escape their cosmic cul-de-sac of destiny.

Our Loki is having none of it and immediately wants to formulate an exit strategy – to much derision from his fellow counterparts.  However back in the TVA, Sylvie is making some equally dramatic decisions… but to triumph over the bureaucratic Time Keepers, she may have to join the other Lokis in the Void…

The penultimate episode of Loki is an experience, to be sure.  But rather than a substantial movement in plot, it’s very much more an askew, absurd string of in-jokes, easter-eggs and nods to the source material… something that makes it akin to Ready Player One. Some of it, like Richard E. Grant’s ‘Classic Loki’ are clearly lifted from the printed page. But the background elements are also full of delights. For those searching for such, just a few of these speeding by include: a crashed helicopter with Thanos written on the side, Avengers Tower with a ‘Queng’ sign (one of several pointers to the ‘Big Bad’ being the comics’ time-travelling conqueror, Kang) a reference to Polybius (the name of a fictitious 1980s arcade game that became an urban legend about government-controlled psychological experiments), the USS Eldridge (as noted in last week’s review) performing a Philadelphia Experiment, Alligator Loki going full Peter Pan/Captain Hook and biting off another Loki’s hand… and look very closely and comic devotees will note the ‘Throg’ cameo  (Yes, in an episode that has an Alligator Loki, there’s also a brief glimpse of a frog that looks like Thor – a genuine double-dip nod to the classic Marvel stories related to the God of Thunder being turned into such a small amphibian for a spell). And that’s just the tip of the iceberg.

Ultimately something of a contrivance and deliberate detour to delay the finale, the inevitable episode of multiple Lokis is undeniably fun if scattershot. Kid Loki might yet be destined for a Young Avengers spin-off.  Grant’s Classic Loki carries the most baggage, a version that survived his encounter with Thanos simply by hiding and has had a long time to realise the consequences of his inaction. Wearing an eternal scowl of someone who has gone on an unpleasant holiday by accident he embodies the end-of-life weariness of someone who doesn’t want to die but really doesn’t have the will to live – though his own ‘glorious purpose’ finally gets recognised in the climax.

The VFX budget clearly got a massive bump with an array of feature-film worthy spectacle set-pieces. In an early scene, the vast, devastated city-scape within the Void is flown through like a detailed drone-camera, Classic Loki recreates the vast metropolis of Asgard as a mere distraction and the billowing Alioth smoke monster is an impressive and dangerous beastie that dominates the landscape.

Going in to the final episode, it’s been fun enough but I’m still not sure if Tom Hiddleston’s been anything but a supporting player in the whole series, always reacting to others’ machinations  – something that doesn’t earn him any of his trademark over-confidence. He usually has such specific gravity that a series that should have orbited around him somehow fails to do so, making him reactive and a step behind at every juncture, somehow diluting and diminishing the major selling point of the show that drifted more  into a surreal one-line ‘cosmic-caper pitch’, one that meanders so fast you don’t notice the lack of real distance covered.

So, next week… our anti-heroes enter that castle (and from brief glimpses in the trailer, fight for their lives in a library) and face glowing peril… is it  the much-hinted at Kang (also apparently the villain of the next Ant-Man movie, so definitely a possibility), an introduction to a Multiverse of Madness or a multiverse What If..?, a left-field decision of a Doctor Doom introduction or a factory reset? The series hasn’t known quite what to do with Loki except throw him into the mix and pray Hiddleston can keep it all afloat… so let’s hope firm decisions and resolutions are made before the next week’s credits roll (or, at least, this being Marvel, in a scene immediately following them…) 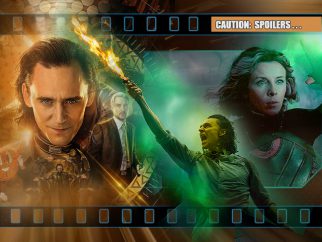