Police, release me, let me go... Amazon's acclaimed 'Bosch' series bows out in style... for now.

When a New Year’s Eve arson attack leaves an immigrant family dead, the press label the youngest victim the ‘the little tamale girl’. But to Harry Bosch she has a name and he is determined she won’t be just another forgotten casualty and the face of an unsolved case.  As 2020 begins, the investigation continues and it becomes clear that charging the people who committed the crime and the person who ordered it may not be that simple… The police of Los Angeles want the case solved and closed before it becomes an embarrassment, but the FBI have an informant and a more sprawling case to protect.

At the station Bosch’s fellow officers are also facing problems: guilt over past actions, a campaign of intimidation and the closing of ranks as the department gets ready to downsize and transfer its personnel.

Harry isn’t about to let politics get in the way of justice, but as he clashes with his partner, the local gang-lords and even his superiors, it becomes clear that there’s going to be a price to pay for pursuing his maxim that ‘Everybody counts or nobody counts’…

But amid all that, there’s also an assassin in town, taking care of loose ends – and with several targets on his list…

Though its Amazon Prime platform meant it was never going to get the ratings of a network show, Bosch  – Amazon‘s first ‘homemade’ drama – has still proven to be a considerable draw and is arguably as good and even superior to a lot of the network police shows.  Even given the necessary suspension-of-disbelief needed for any drama series, compared to many shows that are solved in an hour with few repercussions, Bosch feels like the most involving procedural out there. And with this ‘last’ season of the show and the perennial sound of classic jazz permeating the city and show, the quality doesn’t dip.

A fan of the Michael Connelly source material for over two decades, I originally hadn’t pictured the irascible detective as looking like Titus Welliver, though in the wake of this seven-season success, it’s now hard not to do so. Welliver imbues the character with all the drive, tired determination, respect and foibles of the original novels’ detective, as invested as everyone in (and responsible for) its success. Bosch is far from the perfect cop – he’s made questionable decisions, sometimes with far-reaching consequences, but there’s an innate ethic in his actions and the maxim of ‘Everybody counts or nobody counts‘ is one that rightly resonates, now more than ever. Throughout the show, Bosch has been the guy who understands that there’s politics and agendas at work but doesn’t bother to tread carefully if there’s a more basic justice due. He’ll bend the rules but never without what he considers to be a good enough reason for fair justice to play out. Essentially this final season has two jobs – to underline that maxim (Bosch refusing to let high-end deals and politics submerge demonstrable justice for a young girl killed in an arson attack) and to set up a way for the series to end (or, more accurately transition into what comes next). Welliver also balances out the procedural aspects with the parallel aspects of being a father to his beloved Maddie (Madison Lintz) and we now see Maddie in her own rights having become a determined young woman in her own rights over the course of the show. Lintz has grown with the show and is an important factor in its success. Their father/daughter relationship is convincing and another cornerstone of the show itself.

The season is set in the early days of 2020. This allows it to address issues prior to COVID (which is limited to comments about initial concerns over a flu-like condition appearing abroad) and to more deeply examine office politics and systemic prejudice in the force even before the George Floyd incident and 2020’s summer of discontent. The taunting (and worse) of  Amy Aquino’s Lt, Billings over her sexuality and position of authority is something you hope is over-dramatised for television – but one suspects it’s not and there’s every bit of sympathy for her in the way she determines to go after the bullies and rogue elements (both above and below her pay-grade).  She’s been a tough boss but a consistent ally for Bosch and it’s interesting that he isn’t centrally involved in that specific story-arc  resolution, perhaps wisely showing that Bosch isn’t the answer to all the problems in the precinct.

There’s a fair amount of collateral damage as we proceed and by the time we’re halfway in to the eight-episode season there’s a sense that any of these characters (bar perhaps Bosch himself) could be felled. There are several scenes where shots ring out and there are unexpected casualties (one, at least made me consider some misdirection in the marketing) and the reverse, some anticipated ‘uh-oh‘ moments that have you ready for something that thankfully does not happen – both marks of good drama. It’s the kind of season that might have, ironically, been better paced with a couple more episodes in the mix, but it’s tight enough to not have any real flab.

Jamie Hector as Jerry Edgar shows a cop going through the emotional wringer after the decision he took last season to pull the trigger on a nefarious Haitian underworld figure who had taunted him and the community. Though largely cleared of serious misconduct, the action – based on testimony – seen more as bad judgement, Edgar is clearly haunted by his choice and it seems for a while that it could be nose-diving his career and partnership with Bosch. It’s all part of the transition to come but ultimately avoids some of the soapy tropes of other shows.  The ever-reliable Lance Reddick as Irvin Irving, the sometimes ally/sometimes obstacle, but always politically-savvy operator, also has his usual gravelly-voiced presence throughout and the series manages to let him walk that usual line – sympathy for some of his personal issues and resentment at the way he obstructs Bosch.

Bosch‘s final season brings back a raft of familiar faces from previous years, even if they are mainly just cameos. Some feel more organic than others – seeing police-officers who have featured before makes perfect sense but while it’s good to see the likes of  Annie Wersching and Alan Rosenberg reprising their early guest roles, it’s more a final farewell and obvious  book-ending for the first season. We do know that some of the regular, central characters will appear in the (as-yet-unnamed) show coming from IMDb TV (and already in production) but with Bosch quitting his job with an unretractable ‘fuck you‘ to Irving, it does mean we’ve likely seen the last of many of the supporting cast as regulars. It’s a shame to bid adieu to Aquino’s LT Billings and especially to Detective Johnson (Troy Evans), AKA “Crate” and Detective Robert Moore (Gregory Scott Cummins), AKA “Barrel” who have often been the reliable but heartfelt comedic relief of the piece… if they ever decide on another spin-off, that’s the one with which to go.

Michael Connelly’s best-selling books featuring Bosch will continue and the IMDb series looks set to debut either late this year or early next. Either way, with Connelly, Welliver and show-runner Eric Overmyer all on board for the new show, the jazz beat and the justice beat go on… 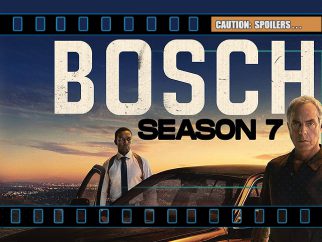