The Chris Pratt-actioner defies logic and gravity for a shiny but generic mish-mash of sf classics...

When a group of humans from the future arrive in our time, they bring bad news. They are at war with an alien species that suddenly appeared from nowhere… and humanity is losing. Things are so bad that they need to bring people from the past into the future to keep their combat numbers up.

After military units fail to make a real difference, the numbers need to be made up by barely-qualified civilians  – one of the people selected is Dan Forester (Chris Pratt), an ex-solider who is now a science teacher but wanting to make a bigger impression. However being ‘drafted’ is not his idea of improving the lives of his family… but he’s not really given a choice.

As things go from bad to worse, Forester’s arrival in the future doesn’t go as planned and when he meets a Colonel in charge of the initiative (Yvonne Strzechowski) he begins to realise that his selection might not have been as random as he believed. The Colonel knows what happened to Dan in the original timeline and doesn’t want it to repeat. She has a very particular mission to save Dan and perhaps the world…

While there’s nothing insultingly offensive about The Tomorrow War – except a by-the-numbers, CGI-filled, logic-defying story that speeds along at a merry pace, it’s also one of the most depressing and formula films in some time… as if an AI computer-program analysed the big sf hits of the last few decades and was charged with creating the perfect hybrid… only to come out with a product where spectacle was supposedly everything, where logic took a back-seat and every trope was revisited, pilfering from obvious and superior sources and released into the world with the seams still showing. And all with a title that feels like desperately uninspired, fridge-magnet compiling. (One of the characters talks about ‘borrowed time‘ which, while not great, would have been a 10x better moniker).

In a nutshell this  is a supporting summer tentpole experience that was denied a multiplex theatre release by covid, but probably dodged a bullet in the box-office department. It’s Starship Troopers meets Edge of Tomorrow with a few lip-service smatterings of The Thing tacked on to an extended epilogue and a list of other releases you could probably reference, if you felt so inclined. It’s the sort of film built with a high budget but very little care and attention, where the screenplay is so fractured it requires suddenly/conveniently introduced certain action trait or element to work, so a line or singular scene is added to make a character suddenly able to pull of the required action – Chekov’s resume, if you must (because every single character with supposedly unnecessary dialogue or talent will have it revisited later as a ‘surprise’ punchline).

Yes, Chris Pratt – he who wise-cracks his way through guarding the galaxy and parking in the Jurassic –  is an ex-soldier (tick), high-school teacher (tick), science-expert (tick), soccer-loving (tick) dad (tick) who extols maxims like ‘Success is being prepared to do what no-one else will‘ and is plucked from the past by the controversial ‘draft’ (which we all know will turn out to be horrible, dangerous but yet the life-changing event that will change his own mundane life and save the world. Because, well, ‘tick’…)  But in making his Dan Forester so resourceful and determined and with natural born leader qualities, it also makes something of a mockery of the fact he conveniently can’t find a job he likes. He’s presented as an everyman, but instead he’s suddenly just every.action.hero.

And, yes, those central time-travel aspects are almost as headachey and barely serviceable as they are in the trailer. When the group of heavily-armed soldiers from the future appear in a sparkly pitch-invasion during a soccer match, they aren’t immediately seen as the invading terrorist force you’d expect, leading to an immediate confrontation… no, their unit leader – conveniently audible through the throng – explains their predicament and is instantly embraced by the powers-that-be. The fact that they landed on a soccer field and not some more suitable venue is just the first indication that these future soldiers are winging it… when Pratt and cohorts are later transported into the future, they arrive in mid-air above Miami and with plenty of unnamed extras plummeting to their deaths.  Alien invasions be damned, the real problem here is that it appears GPS hasn’t evolved much in thirty years.

The idea that these travellers have come from the future to get people to save them from aliens is ultimately rendered moot by its own plot. The more the film goes on, the more it steps into the multiverse theory that you actually can’t change your own timeline, you just create another path. Thus, despite their protestations, they aren’t here to be saved, they’re here to warn us and create a better path. But wait, if that’s the case, the otherwise  sensible idea of only sending back people who haven’t been born in the ‘past’ yet and only selecting people to go into the future to fight who would have died before the war makes no sense.  And ignoring all that, if you only take the very basic idea that the film is all about bringing a cure back from the future to save the past, that’s not even what happens – as Chris Pratt and his polar expedition inject that virus into a couple of the monstrosities and the rest go kablooey with the crashed mothership when things go bad.  It’s further proof that, in so many ways, every scene in the film undermines the imperatives of what’s come before and why.

The idea of a rag-tag bunch of ill-equipped members of the public sent in to the future to fight the enemy is relatively stupid to begin with (the world ran out of soldiers so introduced a draft) but could have been fun. Instead it’s a concept and tone that barely lasts beyond the first act. Once a few stumbling, archetype  supporting players are disposed of (including 24‘s Mary Lynn Rajskub) then it’s all fairly regulated military action. The obligatory familial side of the film – including cute, brainy munchkin and a long-suffering but adoring wife is also fairly threadbare. Dan is angry that his father James ( J K Simmons, looking like – in the film’s best line – a ‘conspiracy-theory Santa‘) for abandoning him as a child and has forbidden contact with his grand-daughter (but, of course, needs his help when the world goes to pieces) and Chuck‘s Yvonne Strzechowski as Colonel Muri (who, yes, predictably turns out to be Dan’s grown-up daughter) holds a similar grievance for how Dan left them in his future/her past. (Except even given his job frustrations, there’s absolutely nothing that suggests Dan would ever end up like that – quite the opposite).

FX-wise, the monsters are good/nasty enough, well-rendered with scary dentures and World War Z-level numbers as they swarm across land and sea, but they are simply another tweaked variant on another long list of almost-insectoid creepers who hover around the Hollywood rogues gallery, sub-Alien types that fail the acid test.

The Tomorrow War, despite its name is a throwback movie that’s a time-killer – a production you’ll shrug and watch with your popcorn and beer and smile occasionally…but largely forget the moment it’s all done… or sit around and decide which of the movies it’s trying to emulate would be best to pull from ye olde DVD shelf. 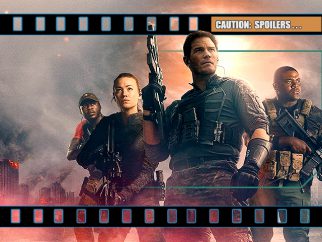