As Kristen Bouchard (Katja Herbers), David Acosta (Mike Colter) and Ben Shakir (Aasif Mandvi) all deal with the signs, portents and ramifications of their recent decisions, they are contacted by Bishop Thomas Marx (Peter Scolari), who says that he has been approached by an upstanding citizen and regular donator to the church who fears he needs an exorcism.

Skeptical, the team arrive for the meeting only to find out that the man in question is the instigator of their recent woes, Leland Townsend (Michael Emerson). They refuse to deal with him, but Marx says that even if Leland is a pretender, the team should be the ones to test his truthfulness.

But even in the midst of their own trials and tribulations, can they play Townsend at his own manipulative and infernal game?

Evil was one of the real surprises of the 2019/2020 tv season.  Created by Robert and Michelle King, it seemed like an ecumenical X-Files on paper, but the series bucked expectations of a formula outing and presented a solid cast with impressively nuanced and sometimes abstract writing. It would have been easy to take the ‘investigations made by sceptic and convert‘ in to yet another version of the Mulder and Scully dynamic, but the show doesn’t settle for that. If Mulder’s poster famously exclaimed ‘I want believe..‘ then Evil’s banner probably reads: ‘WHAT do you want to believe and why?‘ Some series would also go for the ‘possibility of various explanations‘ to avoid making any judgment on the subjects at hand by episode’s end… but though Evil often acknowledge those perspective aspects, its strength is in the consequences side of the matter: it frequently examines how faith and science don’t actually contradict and that the power that both have can make a powerful force in the wrong hands. There are diabolical forces at work – this much the series makes clear – but how much is man-made and how much is something ‘other’ is always ambiguous.

Part of the previous season’s success was that momentum – examining both the slippery slope of good and bad intentions and also the cumulative effect and burden of faith (whether that be faith in religion or faith in science). Not a single character goes through the process unscathed or without having their worldview challenged and having to question the nature of the way they’ve looked at their place in it. In that sense, it’s too early to judge whether the second season will follow through as successfully. Certainly all the best pieces are still in play, but it’s impossible to know how any of those elements will pay off.

One thing that is recommended before settling in to watch the second season’s opening episode, N is for Night Terrors, is to reacquaint yourself with the show – after all the final episode of the first run was broadcast way back in January last year. The reminder of where we left everyone is essential because there are many wheels turning and we pick up right where we left off, with a bare-bones ‘Previously on…’  Essentially: David is having troubling visions involving Kristen, Kristen may have permanently solved the problem of murderer Orson Leroux, Leland is having meetings with the Devil and all the tech installed by Ben isn’t stopping evil coming into Kristen’s home.

One might have suspected that the show would play a little coy as to whether Kristen killed  Leroux, the murderer who was terrorising her and her family (apparently at Leland’s bidding). You were clearly meant to think so at the end of the last season… and it’s completely confirmed when we go beyond seeing Kristen cleaning a bloody ice-pick and she full-on admits all  to therapist Kurt (Kurt Fuller). She seems unfazed by the actions, saying she would do it all again to protect her family, but there’s an unusual detachment that comes along with that crucifix burning her skin, so what that will ultimately entails should be a… revelation.

The cast are all on form (and, as ever, Michael Emerson is having the time of his life embracing his villainous streak). But despite the potential heaviness in the subject-matter, there’s some solid humour and some abstract fun  in the infernal mix, too, some of it down to Rockne S. O’Bannon’s script. Leland’s appearance in David’s visions is certainly out there, Leyland and Kristen exchange wonderful barbs and the running gag that everybody knows David and Kristen’s name but seem to forget Ben (Asaid Manvi) is still funny.  Kristen’s family life with her daughters also provides some grounded domestic moments, with the kids talking across each other in a very organic and appealing way. It’s the series’ ability to play to all those different rhythm and hues that make it compelling and quite unique in the sum of its parts. Another  interesting element is the move to Paramount+ from CBS does relax some of the restrictions. We’re so used to ‘motherfunstering‘ (essentially the switching out of mature language for slightly less provocative words when a film or show is being shown on a mainstream platform) that it’s unusual when it works the other way.  When Kristen comments on Leland – saying “We can’t believe a word that comes out of that fucker’s mouth…” it’s quite clear that her lips are saying something far less on-point – so one wonders if this was ADR’d later to take advantage of the new freedoms.

All in all, it’s a welcome return for the show. Evil‘s appeal will hang on how stories are progressed across the thirteen episodes, but so far it remains a very smart and guilty pleasure… 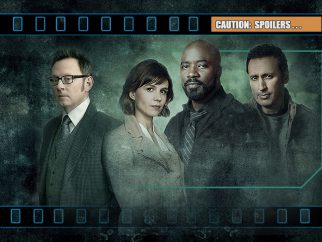