'Our' Loki wants to prove he's smarter than anyone else - including himself. But it seems another variant might eb out to steal that horned crown for themselves...

Now that Loki has been seconded to deal with another ‘variant’ causing chaos in the timeline, the question is whether ‘our’ Loki can be trusted? The answer, of course, is… no, though for the sake of self-interest, both he and Mobius know he’ll work hard to prove he’s smarter than anyone else, including himself.

Given that the TVA immediately shuts down any timeline that’s veering of course, Loki surmises on the method and place in which the variant is possibly making their plans, but with members of the team being kidnapped and their reset devices being stolen, is there a bigger plan at work?

When Loki finally comes face to face with his adversary, he wants to know the cost of interference. But the check may not be in the male…

In 1984 Bonnie Tyler was Holding out for a Hero and asking “Where have all the good men gone and where are all the gods?”  She might have preferred a street-wise Hercules, but perhaps Marvel Studios‘ latest series about a time-displaced deity of a different denomination – being forced to help with a fugitive variant playing havoc with cosmic continuity – couldn’t really have found a better soundtrack as it dipped back in to the 1980s.

In many ways the observations about the pilot episode still ring true for this second entry. The Variant, despite its title, doesn’t really vary from a lot of the pilot beats… a majority of the running-time is  sitting around talking with some banter and snarks and then quick sojourns into the past trying to find more details on whomever is causing chaos to the ‘Sacred Timeline’. A lot of tell rather than show. But despite some abstract fun talking about the nature of time itself,  Loki the series still not really playing to the established strengths of Loki the character: an ongoing, rapid scramble to save his own skin.  One of the joys of the character to date has been his self-serving rhetoric and manic ability to stay one step ahead, if still snatching defeat from the jaws of victory. Sure, there’s plenty of pedalling, back-pedalling and quickfire explanations here as to why he still considers himself the smartest person in the room… but the thing that undermines it – so far – is that he’s absolutely not… he’s eternally playing catch-up and simply making excuses when he looks like an idiot. And Loki the Idiot isn’t half as much fun as Dick Dastardly as a deity.

Hiddleston continues to charm as Loki, though it feels he’s not being asked to do much except frown and smile. Owen Wilson continues to play the exasperated by-the-book figure who is seriously hoping he hasn’t torpedoed his own career by using and even slightly trusting our Loki to deliver. British actress Sophia Di Martino (Casualty, Flowers) as ‘The Variant’ is only seen at the end of the episode, but makes a decent entrance with much to explain and build-on next week.

The trick is that the show wants us to get behind a character that hasn’t had the decade of growth in which we’ve come to appreciate him – for Loki, it’s been mere days since he tried to sell out the world to Thanos’ invading taskforce during the 2012 invasion. That’s a difficult balance to maintain. To say that there’s not a lot of precise momentum and that these two episodes could – with some tweaking – have made a better feature-length pilot, doesn’t mean that nothing happens to add to last week’s set-up. Loki works out that his adversary can hide just before the site of any natural apocalypse because any changes or activities would be obscured by the event – thus a trip to Pompeii proves his point. The developments at the end of the episode with the revelation that the other Loki variant is a ‘she’ is rich with possibilities. Readers of Marvel titles will know that this development isn’t as left-field as some are going to complain. Loki, a shape-shifter at the best of times, has taken on different forms to his classic look on a number of occasions, including the female form and a young child and as the potential multiverse plays with every option, there’s no reason it can’t happen. That Loki seems genuinely in two-minds about whether to follow her or not – or stick with Mobius and the TVA shows – that our Loki still has the ability to weight his options, but there really can’t have been much doubt he’d make an escape… after all, both he and we want to know the female Loki’s endgame. With Loki effectively unshackled, those plans will hopefully be made clearer in the third episode.

In other, related news, Marvel, Loki and other MCU show characters are being used in a promotional tie-in… but definitely in the spirit of their respective shows…

Out of time and on the run – #Loki must #QuestionEverything. @Hyundai. #ad pic.twitter.com/nro5To4au9 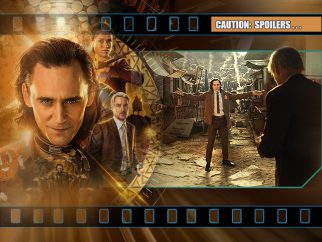