Debris rounds out its season with a 'Celestial Body', some motive-based revelations but very few surprises...

George thinks he’s located the key missing piece of the debris and seeing a shadowy, almost pixilated figure closing in on their location, he, Bryan and Finola head to a quarry to retrieve the debris before Influx can track it down.

On arrival, they find a group of people all gathered several hundred feet away from the fallen extraterrestrial device, all summoned on some primal level and reacting as one, seemingly linked in some strange way. But as Finola and Bryan try to figure out a way to save the people before they potentially expire and Influx closes in on their location, George starts to tell Finola some truths he’s been keeping from them.

If there’s only way way to retrieve the device – one that could kill the bystanders – what decision will be made, who will make it and what might be the cost to life and trust?

I’m going to be brutally honest here and say that while, for the first half of its run, I was a huge advocate for the show, the second half has been somewhat disappointing. There’s definitely been some good ideas and moments in the mix, but for a show that was so understandably compared to the likes of The X-Files and Fringe, it’s also one that has fallen into some of the problems associated with those them. Both those FOX shows had complex (too-complex?) mythologies established over several seasons, but NBC‘s Debris, merely thirteen episodes in, has tilted at so many windmills and side-glanced at so many ‘trust-no-one’ type supporting players, that it already feels like we’re facing obstacles that should only have been found several seasons in to the mix. (Indeed, we noted in the original pilot review, that even the opener felt like a mid-season entry rather than a starting point).

Joel Wyman and the team behind the show have spoken about their ambitions and complex five year plan to achieve dramatic and cerebral satisfaction, assuring viewers that they know the wider specifics, have answers to secrets and will unwrap them slowly…. But such assurances may be moot in an era where so many shows don’t make it out of their first season and it seems incredibly premature to throw quite so many more weird and wonderful questions and complications into the mix at a time when it’s becoming increasingly likely that the show may not be renewed. If it does return – and I still hope it does – the show’s going to have to become far less handwavery, disconnected and abstract in some aspects and start telling a tighter story without so many shiny diversions, detours that pile up or roam free-range without real explanations. Too many times the show has stroked its chin enigmatically and found ways to complicate and simplify unevenly. For instance both Orbital and Influx seem to have developed ways to counteract more dangerous side-effects (the revelations of Bryan’s secret injections and George’s marvelous medicine) despite admitting they don’t have many ideas on what the debris is doing. That’s a bit of a logic jump, but useful as a get-out-of-jail-free card as needed.

It’s quite admirable how the show has managed to deal with covid restrictions during filming, even if there seems to be a loss of some connective tissue.  But for a season finale, it’s never been more apparent – truly, this ‘climactic’ episode looks as if it was the cheapest of the batch and the script can’t cover the weaknesses in scope and script and there’s a scale of talking in quarries that would make classic Doctor Who proud. Literally, one of those dramatic beats is people just standing around, staring blankly into space. The rule of ‘show, don’t tell‘ is one of the great story-telling tenants and Celestial Body finds it has its feet of clay firmly planted with the fact that it’s most people spouting endless vague exposition or posturing with cryptic asides that you know aren’t going to get answers.

The finale offered some developments, but few actual surprises, that old gambit of seeming to give answers but on closer inspection simply being enigmatic and coy or confirming the obvious.

We do learn that Maddox’s reasons for the illicit trade with the Russians is not for monetary gain or nefarious needs – though Orbital clearly has its eye on military application benefits –  but essentially to find a way to help his traumatised son, something rather obvious given the only insights into his life away from the office have been with his under-pressure family. It doesn’t absolve him of some of his activities, but we at least have some sympathy for his motivations.

Tyrone Benskin’s George Jones has consistently lacked the sheer dynamism needed for a key figure and even the revelations that he’s actually  in cahoots with Influx and maybe even leading them (and probably been faking that awfully convenient amnesia all along), doesn’t really come as a huge shock as it was always the best explanation (last week’s ending all but confirmed it). But the shocking revelation ™  doesn’t generate anything other than an annoyed shrug. We simply haven’t been invested in George enough to hate his betrayal except in how it affects our heroes. For half the season he was a missing piece and for the rest a seemingly bumbling exposition bystander, as if the show didn’t know what they wanted to do with him. For a man who supposedly loves his daughter, he’s clearly not the man he was (possibly literally) and his priorities – even if Influx have any positive attributes in their world-view – are just as questionable as those whom he despises. Even if he’s the crux of all things important, it’s hard to actually care, at least with the lack of energy invested in him so far.

The appearance of John Noble  as the pretzel-powered ‘Otto’ is something of a surprise and if it wasn’t for the show’s powers-that-be now saying he’ll become very important to the story (should it continue), it would feel very much like one-off stunt-casting and merely a cursory nod to those Fringe echoes. Noble’s a great actor, to be sure, but here he’s largely being told to be gruff and enigmatic and at this point it seems like a solid performer given a henchman role with a handful of lines. Again, it seems a strange gambit to bring in a character this late in the game and then have him flip a few switches and look constipated throughout. As with George/Benskin there’s just not enough to warrant the casting or claims of importance if posturing is all you get.

We now know that Bryan’s injections are because he had a severe encounter with the first debris humanity encountered, though it’s clear he doesn’t remember as much as he should. ‘Otto’ seems to recognise him, or at least his importance, but it’s – again – one of those things we thought we already knew (the end-credit audios have played into that) and the brief discussion of Bryan being the ‘Third Man’ really don’t offer much but more mystery.

And then there’s a return to the Native American we saw last week (now named as Dakheya Nakai played by Julian Black Antelope) meeting up with Sebastian Roché’s Brill and the blue-glowing orb last seen exiting Orbital… all together and seeing what looks like Finola in a stasis field… despite the fact we’ve seen her hundreds of miles away in the previous scene. The sound you hear is even dedicated fans furrowing their brows.

Debris had – and arguably still has – huge potential but a reprieve and a renewal will have to build and solidify beyond the covid-restrictions so far and have far less diversions… and a cancellation will make it just one more enigmatic NBC series that’s ‘one and out’ and leaving an unsatisfactory ending and promises unfulfilled. Based on the series I want a renewal, based on the finale, I’m not sure I do. 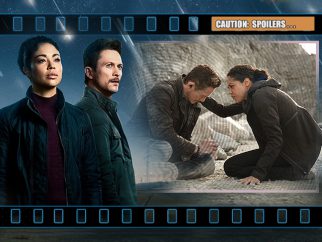 UPFRONTS: The CW gives nod to ‘Naomi’, passes on ‘Powerpuff’…