The screen adaptation of Jane Harper's acclaimed debut thriller finally gets a US release...

Sydney-based Federal Police Investigator Aaron Falk (Eric Bana) finds himself returning to Kiewarra, the outlier Australian farming community of  his childhood, now ravaged by a long and dangerous drought. He has been gone since his teenage years and it will not be an easy homecoming. His childhood friend Luke Hadler has apparently taken a gun and killed his own wife and son and then himself… and Aaron is back to attend his friend’s funeral.

Falk’s original departure all those years ago is shrouded in secrets and rumours – removed from accusing looks and pointed fingers by his father after the suspicious killing of a young girl.

There are those who think Falk was a killer and even those who don’t, have no wish to see him back. But asked by Luke’s parents to have a look at the local police’s investigation of the triple homicide, so they can one day tell Luke’s surviving baby daughter the truth, Falk initially obliges out of a sense of nostalgia and kindness to the parents. But he becomes troubled by conflicting accounts and realises the killings might not be as straight-forward as they appear.

And as revelations and secrets slowly come to light, Falk may be about to discover the truth about the tragedy that changed his life…  and in a tinderbox landscape, all it takes is one spark.

EchoChamber has covered Jane Harper’s books, but it took some time a screen adaptation of her acclaimed first novel, the thriller The Dry to work its way towards the screen. The film was released on New Year’s Day in Australia, but the international roll-out has been slower, partly due to the covid situation affecting so many films and screens.

For this – also the first screen adaptation of her work – Robert Connolly (Balibo, Paper Planes, Deep State) directs The Dry, which was filmed across fifteen towns in Victoria, Australia early in 2019 and one of the huge successes here is that sense of location. The opening declaration of ‘324 days since rain…‘ indicates a dryness on several levels, both physically and in mood. Whether it be the old American West or the still frontier-like fringe communities , there’s nothing quite like vast open senses to evoke a sense of isolation, tight community or primal transgressions where a singular grudge or a virulent rumour can literally be the difference between life and death. But Connolly also makes that work as a counterpoint – the flashbacks full of less acrid times, runnign water and the hope of youth.

Bana plays Falk as both a traditional police officer and outsider, with an innate sense of both justice and his old failings. He fully understands why the community is uneasy with his return – especially at such a charged time because of the sudden killings and the longer-term climate issues – but that doesn’t mean he’ll tolerate the more physical aspects some bring directly to him. Though he’ll try to walk away from confrontations, he’s also capable of ending those altercations if he has to.

Irish actor Genevieve O’Reilly (Tin Star, Tolkien and Mon Mothma in several Star Wars projects) plays Gretchen, one of Falk’s childhood friends and one of the few faces happy to see him. She becomes his sounding-board and there’s definite lingering chemistry, though it’s clear she’s convincing Falk that he should believe the official-line about Luke’s death. Keir O’Donnell  plays the local police-officer Greg Raco who accepts Falk’s help with caution – pragmatically glad of a helping hand in one respect, but also nervous about surrendering any jurisdiction or turf to someone who might at best be an outsider and at worst someone with a massive conflict of interest. The various townsfolk, some on-lookers, some more suspicious than others include Bruce Spence and Julia Blake as Luke’s grief-stricken parents. John Polson plays Scott Whitlam, the local primary-school principal. Matt Nable plays  Grant Dow, a considerable physical presence and a man who has no qualms about expressing his feelings of resentment about Falk’s return.

Harper’s original novel was a stunning debut, a genuine page-turner  full of evocative landscapes, mood and tensions and it remains a solid read to its last chapter. The screen adaptation might be slower than cinephiles sometimes prefer and works within a formula more common on screen than the page, but it honours the book’s mystery and unpeeling of secrets with plenty of red herrings and possibilities with a strong format and style that Harper has continued in her subsequent books to varying effect. 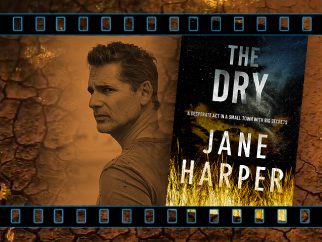