There's little progress in the investigation, but some soul-searching as various attitudes clash...

The ViCAP team double-down on their efforts to find the truth on the River Murders, going back through their investigation to look at the connections made and the paths taken so far.  But when they seek out and pressure potential sources into getting further information on the trials for Reprisol, there are consequences to the tactics they use. Just how far can – and should – the FBI go to strong-arm those people with everything to lose if they co-operate?

As Starling learns how her own traumatic experiences may have hurt others in their aftermath, Catherine Martin ventures outside for the first time since her rescue…

The latest Clarice, entitled Silence is Purgatory, walks a difficult, if well-intentioned line. One of the subsequent criticisms of the original The Silence of the Lambs book by Thomas Harris was the fact that though it’s undeniably effective thriller, it also casually reinforced a malignant stereotype that transgender people were somehow dangerous because of that factor alone – the fact that the serial-killer Buffalo Bill’s given reasoning for doing what he did was to fashion a skin-suit to ‘change’ gender was the hook of the story and the ‘motive’ that did nothing to dispel that notion. So when, in this week’s episode of Clarice. transgender lawyer Julia Lawson (Emmy-nominated, transgender actor Jen Richards) talks to Clarice about the fact that coverage of Starling’s investigation and defeat of Bill merely did the same, there’s a metatextual element to the heartfelt conversation that cannot – and indeed should not – be ignored. Lawson understands the trauma Starling went through and the genuine victory gained in Bill’s defeat, but she cannot wholly forgive Starling for being at the heart of it all and doing nothing which would make people who were transgender feel any less vilified or abused. There’s a danger that important issues in dramas can become too weighty or look like preaching that, however valid, interrupts the flow of a story for its messaging’. Here, despite it feeling like an on-the-nose timely, contemporary 21st century message plea for tolerance and understanding being played out in the 1990s, Richards’ performance makes it work.

But the consequences of how the show plays out that conversation will need to be scrutinised as part of the bigger picture. Our insidious villain Hudlin (Raoul Bhaneja) clearly knows not only of Lawson’s birth-gender but also has no qualms about letting her know he knows and inciting a feeling of intimidation and menace to someone he suspects (and we know) is helping the FBI against him. On the flipside, Clarice – sympathetic to Lawson in every way – is horrified when she’s effectively ordered by her own department to use that self-same information to pressure Lawson into further co-operation – something she point-blank refuses to do. (And Lawson’s partner, Erin – played by Star Trek: Discovery‘s Emily Coutts – is quite right when she tells Julia that the risk she’s taking includes losing desperately-needed medical insurance and a list of things others take for granted).

If the show ultimately sees Lawson hurt or even killed by Hudlin, then it will have diverted into another unsavoury trope of ‘fridging’ a character (particularly a ‘gay’ character) and if anyone at the FBI uses the transgender issue against Lawson, it will permanently cause a distaste for the people we’re supposed to be cheering. Then again, this is a show set in the 1990s and it would be unrealistic to have everything neatly tied off in an idealistic, understanding way when such issues are hardly off the radar three decades later.

Agent Ardelia Mapp (Devyn Tyler) has her own battles to stop being defined by things that have nothing to do with her innate skill-set. She has finally agreed to join the Black Coalition and the further examples of what black agents have faced by an agency far too willing to shine the spotlight of success on white men is lengthy. Again, the show is addressing an aspect of prejudice that was destined not to have a sea-change for a long while and so while it makes great drama, one does wonder what the game-plan is to play it out in the longer-term. It is good that though Starling will be ‘target’ of the legal suit, showing how she even she was given preference while Mapp was not, the friendship and comradeship between the two agents is strong enough to udnerstand the necessity of the fight without it ever being perceived by them as anything less than a strategy.

One of the other key scenes is between Agent Murray Clarke (Nick Sandow) and Michael Cudlitz as his boss Krendler. Clarke is an interesting enigma. On one hand his heavy-handed attitude is rightfully challenged by Clarice when it comes to protecting her source, yet the audience can also see him as a straight-talking good guy who won’t let Krendler sit easily when the recovering alcoholic Krendler says he took a drink as a means to draw the duplicitous Hudlin to make mistakes. Clarke calls that out as b.s. and says he knows Krendler well enough to know there’d be other ways – it’s an uneasy conversation, but the kind that only people who have each other’s backs can do and it’s a mark of good writing that they make Clarke such an interesting character. Elsewhere Marnee Carpenter’s Catherine Martin finally manages to get out of the house and out of the building, despite crippling anxiety from her time in Bill’s clutches.  Carpenter is another strong performer, showing the fracture lines that still plague her but a seam of steel when it comes to an old boyfriend with a selfish agenda.

Silence is Purgatory only inches the main story forward, but it does invest heavily in character-pieces and development, underlining the costs of both action and inaction and the risks that everyone takes when they decide their priorities. By the episode end, those actions have cost lives and increased risks – and there’s a feeling that by the time the season’s done, it won’t be justice that is addressed, but the continuing personal costs to achieving it… 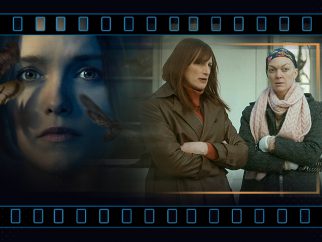