'The Nevers' remains full of ideas, but some of the problem is in the overflowing execution of it all...

Despite Mundi’s demands of a fair trial and the possibility that it might inflame London further, Lord Mullen and the powers-that-be have already decided to make a public event out of killing the captured Maladie and she is to be hanged in one of the town squares.

Penance sees the event as nothing more than a blood-sport that will hurt the safety of the Touched, but True feels there are far more important and immediate issues with which they have to deal – including whatever source of the Touched powers lies below.  As their followers decide who has the greater imperative, it becomes clear there’s a fracture among the inhabitants of the Orphanage and a division of their forces is inevitable.

But Lord Mullen is making alliances of his own, not so much ensuring events goes calmly, but rather than the chaos is tightly focused and contained in his favour…

The Nevers, now one episode away from the end of its current run, is certainly hitting its stride, weaving a complex and intriguing story, an alt-universe all its own – albeit with some familiar regalia, motifs  and trimmings. Sometimes it feels as if the show is cramming in a lot of detail in to some areas and too little in others, with jumps in the narrative that it expects a speculating viewer to simply embrace and move on – or, at best, wonder if they’ve somehow missed an entire entry? The result is fun and compelling if not always even. For instance, in Hanged the term the ‘Galanthi’ is used many times to describe the entity that seemingly exists beneath the London streets and is being scrutinised by Lavinia Bidlow and her team, but the naming of such seems very overt, front-and-centre for a specific term that’s barely been used before. (Does the name have something to do with the Galanthis of Greek mythology and its connections to deceit and birth? Time will tell). Equally True, who truly trusts very few in fear of disappointment or betrayal, seems remarkably comfortable to have Lavinia’s brother Augie in the midst of their plans – the knowledge of his relationship with Prudence and secretly having his own ‘Touch’ doesn’t seem collateral enough to satisfy her. And Nimble Jack – introduced last week – also seems suddenly and comfortably part of the fold. A month has gone by between episodes, yes, but only a week for viewers who, frankly, need better connective tissue, especially when its central characters keep speaking in profound asides and casual riddles, but  as if we’re already clued in to something we’re not.

And again, for a show that is all about female empowerment, the episode has some rather gratuitous nudity and this time it’s not merely background extras in brothels and sex-clubs, but rather lead Laura Donnelly being exposed as True and Doctor Cousens  (Zackary Momoh) engage in some rather vigorous ‘self-diagnostics’. It’s hardly the best therapy (after all he’s forsworn never to cheat on his wife again and she’s lack on commitment herself), but it’s arguably better than True engaging in bawdy bar-room brawls – though it seems to require just as much thrust, parry and hand-eye co-ordination.

Two thirds of the way in and the action is divided with our ‘heroes’ essentially deciding who they are going to follow. Penance believes that Maladie’s execution is fundamentally wrong. She has no love for the murderer, but sees the public spectacle as nothing short of populist blood-letting and a hugely damaging precedent for every person who’s Touched. She is determined to stop it. On the other hand, True has no sympathies for Maladie and less time to worry about her, saying that the trip into London’s underground to find the source of their ‘calling’ is far more important. It’s a divide in both attitude and execution with neither True nor Prudence willing to pivot. It becomes clear that, as viewers, we’ll be following Penance’s agenda and her friends rather than True’s mission (though we do see some late-in-the-day fallout and it seems likely we’ll be seeing the other side of the equation in next week’s chapter).

Though Donnelly’s dialogue delivers excellent snark, it’s once again Pip Torrens as Lord Mullen who has some of the best lengthier and razor-edged dialogue, each line delivered dripping with entitled menace. Maladie might be the overt danger, but its his actions and machinations behind the scenes that seem to be the bigger threat.

The resolution to Maladie’s execution is an almost literal bait-and-switch which works on a tension level rather than a logical one. Her apparent hanging is initially a shock, perhaps a self-sacrifice to bait a trap that will kill the spectators – which essentially works as planned. But the revelation that it’s not the real Maladie (and it was an imposter who was captured last week) feels like a comic-book cheat rather than a clever deception. If you go back and watch the previous chapter, it’s a genuine sleight of hand you could have originally put down to editing but a convenient one nonetheless. That being said, the disguise as writer Effie Boyle  is a good one – enough that you spend time wondering where you’ve seen the actor before, rather than who else they might be within the story – and her peeling off of the disguise in the street is a genuine Keyser Soze moment.

With great characters, sparky dialogue and strong production values – all of which have increased over recent weeks – the Nevers‘problems continue to more in pacing and pentameter, wanting to say so much that it trips over itself and forgets the difference between mythology and footnotes. There’s a lot of potential here and much of it works – Joss Whedon’s hours of television direction have rarely looked more rich – but with a feeling that there will still be few real answers by the end of next week’s episodes, one hopes that the later run builds rather than merely expands. 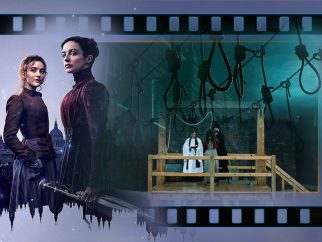