Things Heard and Seen: What Lies Beneath Netflix’s new thriller…

There's a ton of familiar elements in Netflix latest, but it's only the ending that disappoints...

To the outside world, the marriage of George Clare (James Norton) and Catherine (Amanda Seyfried) seems idyllic. They have a young daughter, Franny, and George is on track for a notable position as an assistant art professor in an upstate college.  But there are cracks in their life. Catherine has an eating disorder and needs George’s cajoling to accept that he’s found the perfect house for them to move in to and further his own ambitions.

George begins to fit in immediately, charming his students and faculty alike. Catherine finds it more difficult, feeling both isolated and aware of something ‘off’ in the house – a feeling that’s echoed by Franny who sees a woman in the shadows of her room.

But George, consumed by furthering his own wants and career, has built his life on convenient lies and it would seem that Catherine’s new friends, both seen and unseen, may have something to say about home truths…

Going in to new Netflix offering – Things Heard and Seen – it’s not quite clear as to what to expect.  Unless you’ve read the lengthy book on which it is based,  Elizabeth Brundage’s All Things Cease to Appear, and know the beats to come, it could go any number of ways. On one hand this could be a domestic thriller, the kind where familiar faces act out a story that relies on the tone of The Notebook combined with a Lifetime Channel pot-boiler. On the other, there’s isolated houses with violent histories and things going bump in the night, so this could also be a supernatural shocker – after all, duplicitous cheating and subtle ghostly-goings could dictate very different outcomes. The actual result is, for the most part an interesting hybrid, defying a few expectations, keeping the attention, a decent enough way to pass the time, but and only let down by its end.

Refreshingly, it becomes clear as we progress that the flickering lights and monochrome rocking-chair apparitions that initially unnerve the family aren’t as overtly malevolent as the genre usually demands. There’s no demonic Conjuring/Insidious-like goings-on and, if anything, the dancing lights, reassuring whispers and a few smashed objects seem in more defensive mode of the troubled Catherine as she begins to feel more comfortable around the ethereal presence than her own husband. The story is set in the 1980s – so, helpfully or otherwise, there’s no internet or cell-phones which might have hobbled the lack of communications going on – but for those old enough to remember it, the closest comparison in tone is probably the superior What Lies Beneath (the 2000 film starring Harrison Ford and Michelle Pfeiffer).

James Norton (currently on show as the serpentine Hugo in The Nevers) is quickly painted as a controlling force in the marriage, though given Catherine’s uneven moods and eating-disorders it’s not initially clear if this is his active or reactive behaviour. The couple have clearly moved out of her comfort zone on his request, but the fact that he quickly finds time to bed student Willis (Stranger Things‘ Natalia Dyer in less ingenue-mode) tells you everything about his priorities. As we see events unfold, it becomes obvious that George’s life has been built on a number of damning deceits, some of which start to catch up with him when outside forces reveal inconsistencies in his stories. Seyfried plays Catherine with a gentle determination, as a troubled soul and  the film’s emotional pivot though we’re not sure for a while how the story will unfold – with her or despite of her. There’s certainly a maelstrom of characters that could pull the narrative one way then another.

The story suggests that we’ll get interesting developments involving Dyer’s Willis and Alex Neustaedter’s Eddie as both of them grab the individual extra-marital attentions of the fractured couple, but neither supporting character gets fleshed out, with Dyer’s role particularly undeveloped.  A scene with them consoling each other late in the story is based solely on a singular line that they happen to know each other and feels scattershot). There’s also some scenes suggesting Jack Gore as Eddie’s baby brother Cole may have a part to play, but that too goes nowhere. Reliable veteran F. Murray Abraham as  George’s college superior and Rhea Seehorn as freer-spirited arts teacher Justine have more to do, but as they both find things out about George that he rather they didn’t, they become collateral damage to his conceits. It’s always good to see Karen Allen but she’s wasted in what amounts to two scenes of exposition.

There’s no real boundary-pushing in this release, but it’s a slow but confident mix of genre-staples that seems like a comfortably good blend through most of it’s running-time and it’s easy to see the Netflix multi-demographic appeal for a captive audience. The spookier side of things seems vague and ill-defined but it looks beautiful (shot on location in the Hudson Valley in New York state by directors Shari Springer Berman and Robert Pulcini). Yes, in hindsight, the film’s opening shots (that precede the ‘One Year Earlier‘ events of the main story) make very little sense as they’re played out. But it’s more the last ten minutes or so that feel like a let-down with a distinctly unsatisfactory ‘What, that’s it?‘ feel as the screen prematurely fades to black, cloaked in metaphor and symbolism rather than accountability. Is George just a murderous narcissist or have some of the house’s darker elements pushed him father than he intended – some scenes seem to lean one way then the other, though Norton succeeds in making him a character we want to see pay for his actions).

Some may see Things Heard and Seen as a feminist supernatural outing, though that’s probably giving it far more credit than it deserves – the original book may have been so, but like recent Oscar-winner Promising Young Woman there are various prisms through which to view it…the Netflix result still has the familiar trope of women ultimately being the victim of nefarious men, even if they get the last line and revenge from beyond. 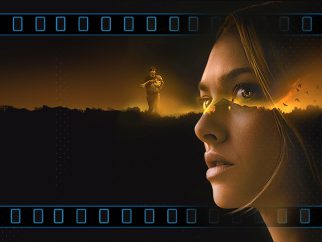