The Sinner and the Song: The ‘Nevers’ heats up the ‘Ignition’…

There are fateful encounters between unexpected parties as True and Prudence talk with Bonfire Annie… and Frank Mundi finds himself once more in the company of Hugo Swann. As various agendas play out behind closed doors, the fate of the ‘Touched’ could go in any number of ways. If Mary can find her haunting voice again – and the latest technology can ‘amplify’ her song of hope, maybe those with gifts can find safety and solace. If not, there are any number of people ready to exploit True’s plans and question her secrets.

But as a very public ‘concert’ is organised and enemies are uncovered, True is attacked by a man who can walk on water and a well-armed man awaits a fateful performance which will change everything…

Episode Three of The Nevers (entitled Ignition)  is the first chapter not to be written or directed by Joss Whedon –  and the inherent changes that brings range from the subtle to the in-your-face. What was previously designer-label provocative but street-wise coy – a muttered curse word here, a blink-and-you’ll-miss it errant nipple there as nods to the “mature” – is suddenly changed to something palpably darker involving considerable violence and full frontal nudity (for once, of both the female and male persuasions). While admittedly, those more flesh-driven scenes  mostly take place in Hugo’s risque Victorian ‘sex-club’ (though an injured Malady apparently likes to play ‘doctors’ as well)  the decision to be quite so explicit seems like a calculated shift, a deliberate change of pace and mood… almost as if a studio note had read “Less V&A, more T&A…less Twilight, more True Blood… we are HBO, after all!“. Was it needed? It’s hard to say. There’s nothing wrong in the tonal shift per se, indeed, in other ways, all the different elements of the show work better here than they have in previous weeks, but it’s exactly that, a slightly, but recognisably different vision for the sum of the show’s parts… and some ‘parts’ more than others.

The show retains its key strengths – a mixture of strong women striding out a century before their inevitably natural rise, interestingly askew period-detail as both drama and punchline and an equally punchy script that feels less like scripted dialogue and simply like smart banter. There is also some decent character development, adding some texture to the archetypes we’ve met.

We’re spoon-fed more crumbs as to how Amalia True and Maladie know each other. We already know that some of Maladie’s psychotic behaviour is connected to being Touched (though previous glimpses would seem to suggest she was being  – rightly or wrongly – dragged to an asylum when the original Touched trigger-event occurred) and a few lines of dialogue in this episode indicate that Amalia and Maladie may have met there, with the latter being left behind for some reason. The show also seems to be going out of its way to make Amalia seem less and less trustworthy as we go. She even lists her own possible foibles: “I also drink when I shouldn’t, fight when I needn’t, and fuck men whose names I do not learn. I get nervous in crowds. I see things that aren’t there. When I meet someone, the first thing I think of is how to kill them.” Compared to some of the other players she might be on the side of the angels, but she’s casually putting people in danger on a regular basis, seems to have a fluid relationship with multiple  levels of commitment and enjoys the thrill of the fight and the physical  a bit too much…and that might be fine if other people didn’t keep getting hurt because of it. It may not be too long before we find out that a lot we think is ‘True’ is not.

Ben Chaplin’s Mundi, we learn, is attracted to men (though he denies it to himself) and that was likely the reason his near-marriage to Mary led him to being left at the altar. The separate scenes that  Chaplin has with both Hugo Swann (James Norton) and Mary involving words of between-the-lines intimacy are both solidly played and Chaplin’s Mundi could end up being an interestingly-flawed key player as things progress. While earlier episodes might have painted her as a supporting henchwoman, flame-wielding  Bonfire Annie Carbey (Rochelle Neil) moves closer to a centre-stage role in a part that feels like it could be a deciding factor in the various power-plays to come – and the early scene between her True and Prudence is both sharply-scripted and funny (inevitable when you’re standing next to a cart full of burning opium).   Other supporting characters such as Pip Torren’s Lord Massen, Nick Frost’s Beggar King and Elizabeth Berrington’s Lucy all get key scenes that speak to their separate histories and demand more coverage.

The flashes of humour are balanced by tragedy and pain. The unapologetic confession of a woman who drowned her own infant because they were ‘Touched’ is chilling. The sudden death of Mary (Eleanor Tomlinson), just at the moment she is able to reach out to the Touched and perhaps bring them together in hope, is brutal in its (literal) execution and intent – felled by not one bullet but a deliberate barrage from a Gatling-gun that ultimately rip through her and beyond even the abilities of Doctor Horatio (Zackary Momoh) to repair. Killing a wholly sympathetic supporting character that the audience are latching on to – as a statement that anything is on the table –  is a gambit familiar to long-standing Whedon fans and productions , so much so we really should have predicted it. The problem here is that we really didn’t know enough about Mary to fully feel its impact, just three episodes in.  We’re shocked and surprised but not quite as emotionally-jolted as the characters surrounding her. To really turn the knife it would have been better to wait a few more episodes and then, at least the ‘fridging’ would have felt sufficiently cold rather than just shock-value.

On the action front, the show continues to have solid choreography in its hand-to-hand combat and the fight between True  and ‘Odium’ above, on and below the surface of a deep and dark lake is certainly the kind of original and imaginative conflict we really haven’t seen on screen before – which is quite a boast by any standard. There’s still a feeling that the show would have been better if it had preceded other fantastical world-building series, rather than drawing on such, but there’s a growing confidence in the world it is building that should work well enough once it settles its tone and pace… 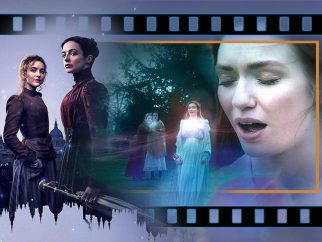