Not without structural flaws and an over-packed list of issues, the Disney+ series was a Marvel showcase of intent...

Karli and her Flag-Smashers want to make one final display of their cause, but if it involves murdering the executives of the the GRC, then an array of different forces are prepared to stop them. Sam Wilson, complete with a new, rebuilt costume and Bucky Barnes race to New York to stop her, with Sharon Carter and John Walker also turning up for their own personal reasons. But are they there to help of further their own causes?

As fists fly and the cameras film, lives are on the line, but the deeper questions are the agendas at work behind the scenes and the aftermath of the outcome. If the legacy of Captain America is at stake, what form must it take and what cause must it represent?

“You can knock down a forest with an email; you can feed a million people with a phone call. But the question is, who’s in the room with you when you’re making those decisions? Is it the people you’re gonna impact? Or is it just more people like you..?”

There was a lot to pack in (and to un-pack from) the season (series?) finale of The Falcon and the Winter Soldier and to a large degree it was… okay, dovetailing many of the story-arcs, though there’s a case to be made that the sheer momentum on show somewhat paved over the important details along the way.

Sam’s Wakandan-supplied outfit (let’s hope they haven’t built in a back-up wings-fall-off option) is nifty, effective and certainly makes an impression throughout – the descent to the street carrying a body, choreographed to look like a descending angel, is a key, if on-the-nose visual of the hour.  It’s clearly not a knock-off outfit like John Walker’s pale imitation and sets up that this is a distinctly new version of a hero with the Captain America name. (However I can’t be the only one who thinks that outfit and ‘goggles’ reminds them of The Boys‘ A-Train get-up?)  Sebastian Stan gets some combat moments as Bucky and seems to finally come to terms with his history (which, after all, really wasn’t his fault, so time to move on), but seems largely there for support in the finale and to build-up bromance scenes once the action’s done. A show with this title should have utilised that more.

The John Walker aspect is still light on needed consequence. It feels like much of his arc was simply there to set up a new identity as the ‘U S Agent’ (reflecting the arc from the comics) and the oft-rumoured possibility of a more deniable unit, comparable to the Avengers, but with a tighter ( if  more deniable) leash from one of the alphabet security agencies – led by Ms. Dreyfus. There’s a key moment in the finale where he has to choose between killing Karli and saving a truckload of people and we see he’s evolved a bit and makes the humanitarian choice that he might not have made earlier in the heat of battle. But this is still a guy who didn’t just ‘misbehave’ a bit, he openly murdered someone on live television and yet he’s walking around free like a poster-boy for Derek Chauvin policing  – and this episode he’s actively shield-swinging in the middle of a crowded New York intersection full of cameras, when, frankly, he should have been in one of The Raft’s cells. That’s quite a seriously questionable and egregious oversight in a show that wants to be relevant and strike a moral tone.(It might have made a more convincing tale, establishing the same outcome if he had been awaiting trial and was then broken out / released under dubious circumstances).

The fate of Flagsmasher Karli Morgenthau (Erin Kellyman) was always likely to be bleak – morality-plays tend to demand a balancing of the scales for murderous actions committed, for whatever reason. The series (an uber-morality tale in and of itself) wanted us to sympathise with her reasons (and it’s not too hard to picture an alternative drama where she and her character were the heroes) but not her actions. However there wasn’t always a consistent throughline in execution… and there’s definitely a feeling the writers vacillated on some of the elements and issues they sought to highlight and were able to forgive some characters with much worse behaviour who got a pass. The activist is felled by a bullet from Sharon Carter as Karli fights Sam, thus keeping Carter’s own dirty secret intact.

Sharon Carter being the Power Broker is probably one of the worst kept secrets of the series and many fans guessed this ‘twist’ early-on. The influential arms-dealer was referenced multiple times but never seen and Carter was in all the requisite places at all the relevant times with all the right resources. It’s also  ‘convenient’ how she showed up for the finale (“Relax, no-one’s looking for me,” she says removing a Mission Impossible type mask that she’s apparently wearing for no reason, then?) but her role in the climax and the stick-around-for-it mid-season epilogue allows the powers-that-be in the MCU to possibly use Emily VanCamp in any number of ways going forward, both heroic and more dubious… even though there will be those who think the character’s shifted moral-centre is a shame.

Sam’s speech in front of the cameras, taking the  Global Repatriation Council  to task for looking after themselves more than victims and for taking advice from people like themselves not those with more desperate needs, may be the unapologetic ‘great oration’ (that we see far more often on screens rather than Washington DC or seats of power where its needed) and several beats too long, but it pins the series’ view of a more accountable red-white-and-blue mission and, at a time where international policies on refugees and a national debate on the inequalities of race couldn’t be more centre-stage, the show couldn’t be more timely.  Sam notes that’s he’ s fighting for a country where a proportion of people will hate him for being a man-of-colour in the costume of an American icon and it’s sad that even amongst the show’s viewers, he may be right. When he later shows Isaiah Bradley that part of the Captain America Exhibition has finally memorialised  Bradley’s early  role in that legacy – which must have been turned around at super-speed – it’s an undeniably emotional and important moment, though the caption on the display talking of his appalling treatment by the government seems a far more explicit mea-culpa than one would expect even on a good day.

Realistically, the series was trying to fit in too much, saying too many things in too short a time, sometimes short-changing characters (including its leads who were almost always reactionary  and which sometimes wasted the chemistry they have when both are on screen together, even if just talking) and ticking off issues – and not always doing so without obvious logical contradictions and conflicts of interest – but The Falcon and the Winter Soldier still did pretty well in even adding some nuance to the general superhero formula, asking good questions if not giving any new answers. Except, if you need help to stop a boat sinking around you, get yourself some good friends.

The action was ramped up to an impressive scale  for the finale, which should please hardcore fans, but even in a genre that often fails to adhere to any real science, it pushed the envelope in physics and believability in many sequences. Helicopters, jet engines and… well…. gravity simply don’t work that way. While it’s often forgivable for the sake of entertainment and a climactic pay-off, scenes dealing with the rescue of the people inside the Italian-jobbed amoured car and the helicopter will have raised a few eyebrows and ‘Why didn’t they just…?‘ questions.

The Falcon and the Winter Soldier‘s successes have been the action sequences, the chemistry of its stars and the inclusion of pertinent social issues. Its failures have been in awkward pacing and its clumsy patchworking of so many agendas that failed to explore them. Whether due to writing or COVID obstructions, worthy questions were raised but ended up being lip-service punctuation. If there is a second season (of what would be Captain America and the Winter Soldier as the closing credits inform us) then there’s much to build-on here, some lessons to be learned and many questions to be answered (not least of which is the blatant avoidance of talking about the actual fate of the man they are all vying to replace… is AWOL Steve Rogers on the moon?) Perhaps these will be addressed in the just announced plans for a fourth Captain America movie.

But this first run – often feeling like its real reason for existence was as a toe-dipping, launch-pad for further MCU ideas rather than the cultural maladies it courted – has been an ambitious production that at least tried to reach for the stars… and stripes in contemporary fashion. 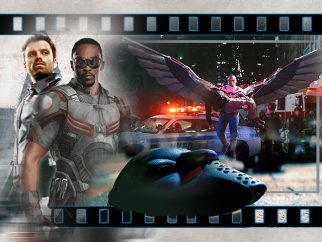