Still clearly and heavily-influenced by familiar comic-book set-ups, The Nevers remains a stylishly-executed if not original endeavour...

Maladie is still on the loose and has the melodic Mary imprisoned, trying to understand her ‘gift’. Amalia True decides that it might be useful to work with the police to find their common enemy and uses the ethereal gift of newcomer Desirée Blodgett to get more answers from detective Frank Mundi. But while Amalia pursues the truth, Lavinia Bidlow insists that some of the Touched make an appearance at a high-society soiree to further the cause of their acceptance… though Penance finds that they’re ultimately no more than a sideshow…

Bidlow’s brother Augie has some secrets of his own, but with whom will he choose to share them?

With some of the necessary exposition out of the way, the second episode of The Nevers (entitled Exposure) feels a little less like it’s flamboyantly laying out its stall and is able to simply build a little on the main characters. Whedon once again directs, but the main script credit goes to a fellow Mutant Enemy stablemate Jane Espenson whose dialogue feels  just a bit more organic, able to deliver zingers that make you think the characters are smart and sassy rather than noticing it in the script itself (which, like visual effects, is just as it should be).

Though she’s our default hero and leader of the underclass and our band of misfits, there’s clearly a lot more going with Amalie True (Laura Donnelly) than we know so far – the first two episodes suggesting that her history is far more complicated than it first appears (She seems to know Maladie from before events and what was going on with the watery attempt at suicide in the opener?). Could it be that both of these characters have changed form yet still recognise something in each other? Ann Skelly as Penance Adair continues to have an air of innocence and naivety about her, though we’re starting to see some of her steel when she’s treated badly by others even those she has an innate connection with, like the upper-class Augie (their scenes together work well).

There’s no escaping the continued X-Men comparisons and influences – more so with the comic’s Claremont/Byrne era than the films – and Olivia Williams as the wheelchair-bound Lavinia Bidlow feels like some darker version of Xavier (and after this episode there’s serious questions about the real reasons behind her apparent ‘altruism’ for the Touched).  The fact that the Touched are asked to identify themselves at the party by wearing blue ribbons is not a subtle metaphor for a Jewish ‘Star of David’ or ‘Scarlet Letter’ and is one of the continuing signs that even those who seem to be helping the Touched see them as something else. James Norton as Hugo Swann and Tom Riley as Augie show different ways the ‘lowly’ Touched are treated by the upper-class – Swann seeing ways to exploit them and Agie, secretly having powers himself, trapped between matters of duty and class-system of the time. Maladie may still feel like a psychotically jigsaw’d version of The Joker and Harley Quinn, but Amy Manson (Being Human, Once Upon a Time, The White Princess) makes the freestyle ranting feel like it has purpose and the hope is that Maladie’s secrets will start to coalesce into something more tragic than evil as we move forward. Eleanor Tomlinson (Poldark, War of the Worlds) as Mary also has potential, her gift of ‘soothing’ others who have the Touch by the power of her songs looks set to be explored as much by the audience as Maladie. Ella Smith as the deliciously-named Desirée Blodgett, literally with a gift-of-the-gab,  is also a great addition.

There’s some more close-quarter combat and well-choreographed set-ups amongst the period-drama… and the ‘climax’ of the episode feels unapologetically like a traditional comic-book set-up (though, more directly, the big-screen Batman and Robin moment of ‘whom do I save?‘). True’s solution to that problem is a big gamble that only just pays-off.

There are only six episodes in this ‘Part One’ sequence (with the second half unscheduled, but likely coming towards the end of the year) which feels a sufficient time to gain a foothold and make the audience want more. Stylistically there’s much to like here and the budget to back up the many ideas on show as the characters, all with appropriately fairy-tale, almost-Dickens-like monikers, dance through the events – even if some of the concepts and beats are familiar. Yes, there’s still that resonating feeling that had this appeared on screens a few years ago it would be met with thundering applause but coming in the wake of other ambitious, fantastical outings and recent developments, it’s receiving more subdued, polite nods of approval. 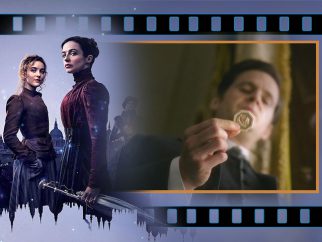