The CW's latest reboot takes the original show's premise and turns it into a misfortune cookie-cutter outing...

When a cultural tour of China turns out to be a way for Nicky Shen’s mother to marry her off within her ancestral Chinese territory, Nicky baulks and runs – finding her way to a temple run by the enigmatic Pei-Ling. Nicky decides to stay for three years but her training is cut short when unknown  ‘raiders’ mysteriously attack the temple, kill Pei-Ling and steal a mystical sword.

Barely surviving – and deciding there’s nothing left for her in China – Nicky returns to her estranged family in San Francisco only to find recrimination for her absence… and that her mother and father’s restaurant business is under threat from local Triads.  Deciding she won’t stand for assaults on her family, Nicky tries to get the community to provide information on the gangland boss who is threatening them… and when various henchmen try to dissuade her of that notion, she uses her martial arts to literally fight back.

Can Nicky heal the family divisions while restoring order to their corner of the city as well as continuing to investigate the legends that might give reason to the loss of her sifu?

It would be wrong to expect The CW‘s latest reboot to embrace everything about the original Kung Fu concept. The hit show of the 1970s, though a beloved nostalgic staple for those old enough to remember it, would probably not pass muster for modern viewers – a wandering monk from the East walking the American West would likely need some make-over. The network knows its demographic and was always going to gear its presentation towards something that would appeal more to a Twenty-Something audience than those raised on David Carradine  projects. But even on a platform known for its unrelenting (and yet undeniably successful)  ‘beautiful people with fantastical problems‘ template, Kung Fu feels like a particularly lackluster, light-weight effort – an unapologetically half-hearted, bullet-point checklist effort to combine opportunistic elements behind a nostalgic cover-brand. It takes everything interesting that the original show was known for and dilutes, simplifies and streamlines it, sometimes to absurd degrees.

Taking more of its cues from Mulan than Kung Fu, the show features a central character who, momentarily, hung out at a temple of female shaolin warriors and now wants to avenge the death of her sifu but, instead, returns to San Francisco to make her estranged family proud (oh – and take on the Triads!). Though its fighting monks might be more famous than its warrior nuns, it’s possible to argue that such sects (and parts of the Buddhist faith) have historically existed and the series is largely set in completely modern times – so some leeway can given to its core gender-switched idea as a starting point. Even so, for such an important yet under-developed part of the concept, it’s one that feels like a foot-note or cheat-sheet.  We see Nicky escaping from a speed-dating event gone wrong, meeting temple-leader Pei-Ling (Vanessa Kai), undertake a few training sequences, witness an unfortunate impaling (and the theft of a magic sword) followed by Nicky’s departure… and this is all within the first seven minutes of the show, all told in a ‘Dear Diary’ almost anecdotal monologue… all before heading back to the city of brotherly love for a family reunion and the main show to begin.

But even in a simple ‘Shaolin-spritzer’ of a story and with an exposition-heavy pilot, the internal logic immediately starts to confuse, lacking key, specific details to accompany its beats and beat-downs. Other than finding a sympathetic ear in Pei-Ling, what really (other than the demands of the script) makes clearly independent spirit Nicky stay so long, committing to a likely severe-discipline regiment… when all we have to go on is some exasperation over her mother’s interferences in her life? (Does Nicky at least let her family know she’s not dead in a ditch? Presumably so as  despite the family moaning about lack of contact for three years, there’s at least one snark from her brother about expecting her to have a shaved head on her return…). Shifu Pei-Ling certainly sees something in her  protégé but short of a few Ob-Wan like platitudes (that also, conveniently, continue after her demise) and long walks below CGI’d mountain backdrops, it’s never clear what that is and the vague hints of Nicky being a Buffy-like ‘Chosen One‘ that are sprinkled into later proceedings, aren’t really strong enough to raise anything other than a ‘Wait, did I miss something?‘.

While Legacies‘ Olivia Liang is a likeable and capable-enough lead in the acting department, it’s really hard to sympathise too much with Nicky’s angst or believe in her new-found gusto, especially with family-led set-pieces that often feel like a sit-com set-up minus a laugh-track. Nor is the lead actor any great martial artist, which is pretty important. You’d expect a show of this name to have one redeeming feature and that would be its fight sequences.  Sadly, the pilot’s action scenes are so badly put together (on a choreographed and filming level) that it’s often clear that several keys blows don’t come close to connecting and that others rely heavily on obvious wirework or are being (nearly) saved by slow-motion effects. Surprisingly, the pilot is directed by Hanelle M. Culpepper, usually a proven steady hand (and whose credits include Star Trek: Discovery, Star Trek: Picard, SWAT, Lucifer, The Flash and NOS4A2) but there’s little of the style or sparkle we’d expect.

And, yes, don’t get me wrong, it’s genuinely great to see under-appreciated or ignored demographics getting the spotlight. But Kung-Fu feels more like a poster-child for the sudden wave of shows that are more about representation than actual inspiration. The base argument that putting a woman in the role originally played by a man is wrong remains a ridiculously weak one… there’s absolutely no reason a woman can’t be a dynamic lead, even in a legacy title and bring something different to a role that needs to find differences to be interesting. However, there’s now no shortage of strong female roles, particularly on primetime television, so that’s hardly a no-lose marketing advantage either – it has to be made a worthy transition not assume the mantle without scrutiny. Much more importantly, at a time when racist attacks against Asian-Americans appear to be rising, Kung Fu‘s cast is predominantly Asian and for a primetime drama that’s a huge and positive factor worth celebrating. It’s a welcome, affirmative statement of inclusion and long overdue. But even that plaudit is somewhat undermined by subsequently using every single trope and stereotype you’d expect. The Shen family (headed by legendary veteran Tzi Ma) runs a restaurant, Nicky’s mother Mei-Li Shen (Kheng Hua Tan) is a controlling ‘Tiger Mom’ (whose interference led to Nicky fleeing originally),  her family are in trouble with the local Triads and Nicky’s potential new suitor Henry (Eddie Lu) is both a nerdy historian and *surprise* a decent martial-artist when the needs arise.

Even non-traditional elements feel like a checklist of modern procedural convenience: Nicky’s younger brother Ryan (Tomorrow, When the War Began‘s Jon Prasida) is gay and only recently out of the closet – but also a medical student who can run out on patients to play ping-pong; Nicky’s older, about-to-be-married sister Althea (Shannon Dang) is abstractly a part-time hacker who can break through mega-corporation firewalls while doing her nails and Nicky’s ex, Evan (Gavin Stenhouse) is now an Assistant DA who is so professional that he lends the Shen family boxes of confidential documents on the local Triad overlord as long as they pinky-swear not to tell anyone or do anything silly with them. What is this, Scooby Doo?

The CW was, of course, home of Supernatural and still boasts the broadest raft of superhero shows and it feels like executive notes must have demanded something ethereal and fantastical be added to the mix in a first draft. So, lo and behold, there’s also a Crouching Tiger, Hidden Dragon meets Batman: Soul of the Dragon sub-plot element grafted on to proceedings, with that aforementioned legendary sword having been stolen from the monastery by Pei-Ling’s killer and which turns out to possibly be  part of a bladed collection that when fully reunited could destroy the world… (with lots of additional historic footnotes told by Henry and seen in parchment-animated sequences). The ‘big-bad’ Zhilan (Yvonne Chapman) is seen only in that early intro cutting down Pei-Ling, stealing the blade and generally looking slinky and nefarious (and then is almost forgotten as ‘Chinatown’ urgencies take centre-stage) but she will obviously be back to plague Nicky once she realises she survived the temple massacre.

Kung Fu as an innate idea is great, its backdrop potentially timely and with a concept that could straddle several demographics. It’s a show you want to say nice things about, purely on instinct.  Instead, this re-imagining lacks imagination and, well-intentioned or not, it’s a mediocre mess that wants to to skate by on diversity strengths while embracing every associated trope going. Invest in DVDs of the 70s show or binge-watch Cobrai-Kai, but give this a miss… 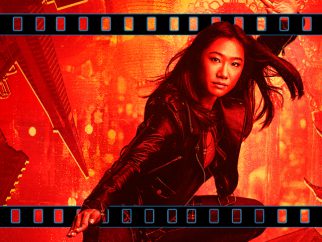