Legacy looms large as Sam and Bucky reluctantly join forces and find that the past can come back to haunt them...

There’s a new Captain America – and it’s not Bucky or Sam. The US government has selected a highly-decorated soldier named John Walker to assume the title and have already created a number of PR events to launch their new incarnation. Neither Sam nor Bucky are impressed with his newcomer and even when he – and his own sidekick  Lemar “Battlestar” Hoskins (Clé Bennett) – comes to their assistance during an attempt to bring down a rogue convoy, it seems there’ll be no thawing for this Captain any time soon.

But the convoy experience does reveal that the Flagsmashers seem to have enhanced strength similar to those who received the super-soldier serum and – despite it meaning his misses his mandatory evaluation – Bucky has an idea of where to look for some answers.  But who is Isiah Bradley and what deeper questions about the super-soldier serum does it raise?

Much as though there’s plenty to like about the latest Marvel/Disney+ series, there’s definitely a feeling that releasing the first two episodes of The Falcon and the Winter Soldier together might have felt like the proper kickstart to proceedings because it really takes both ‘hours’ to establish where all our main characters are and some of the threats they face. (Is it wizards, robots or aliens?)

Anthony Mackie and Sebastian Stan work well together as antagonistic friends – the kind that would likely die for one another on principle but drive each other crazy if in the same room for too long.  But that antagonism, at this point, still feels just a little bit artificial – there for dynamic friction of the show. The last time we saw them together was at the end of Endgame and they were on good terms. Yes, there’s obviously a weird dynamic as both could have been heirs apparent to the legacy of Captain America, but Bucky seems less frustrated with Steve Rogers picking Sam Wilson to take up the shield (which might have been a genuine gripe) and more that Sam deciding not to run with it. Instead the dual psychotherapy session with Amy Aquino  has Bucky saying that if Steve was wrong about picking Sam for the role, could Steve’s faith in Bucky becoming a better man also be flawed? That seems a little like a narrative stretch and over-complicating what could have been an easier dynamic between the two leads.

However their frustration at Captain America becoming a ‘brand’ is palpable and understandable. While they are arguably give John Walker (Wyatt Russell) a far harder time than he deserves (at least at this point), their allegiance and love for Steve would also obviously create friction with anyone picked by the government simply to fulfil the iconography of it all. Walker  has no real super-powers, but has a decent-enough military pedigree and rewards for bravery… though the audience and the titular heroes know that the real soul of Steve Rogers was his compassion for what was ‘right’ rather than merely expedient. There are hints that Walker, for all his bravado, is merely a company man and one who might have anger issues. That might well come into play, especially with a subtle mention of ‘Power-Brokers’ during the episode that might reflect the comics in which their was a cost and trade-off for obtaining real super-powers? For that matter, the whereabouts of Steve Rogers is being kept deliberately opaque. The world doesn’t know he aged, but there are moments when that ‘legacy’ feels almost literal and that Steve has died – which seems like closing off an avenue in a definitive way that isn’t likely to happen.

It’s clear that stunts and set-pieces will be a major part of the show and the slugfest atop two juggernauts is impressive in its blending of choreography and post-production enhancements. It shows how far budgets and scope have come when such a sequence would normally be the soul purview of a big-screen James Bond-like experience. But it’s also interesting that as we get to know some of the ‘Flag-Smasher’ group without their masks, they aren’t the generic villains we might have though they were. Their redistribution of food and resources doesn’t come from a wholly bad place, it’s arguably their execution that puts them on the heroes’ bad-guy radar.

Importantly – and sadly, topically – the show is clearly not afraid to look at matters of race, introducing the character of Isaiah Bradley (played by veteran Carl Lumbly) who die-hard fans of the comics will know has incredible moral implications for the story going forward. 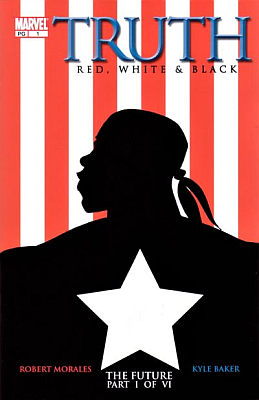 In 2003, Marvel produced a ground-breaking title linked to the Captain America concept. In the seven issue comic The Truth: Red, White and Black, it was revealed that in 1942 there had been  attempts to further produce the same ‘Super Soldier’ serum that would change Steve Rogers into the poster-boy for American might. Reflecting the real-life controversy of the Tuskegee Syphilis Study (a forty year study, starting in 1932, that studied effects of that condition and in which African-American men who participated were misled and told they were getting free healthcare from the government), the new Marvel story told how the serum was tested on unknowing black soldiers in an effort to perfect it. The serum led to most of the subjects dying horrible deaths or being executed for knowing too much – but their demise kept a secret. Only one subject survives the serum, Isaiah Bradley, who gets a spare costume and goes on a mission to stop the Nazi war efforts to produce a similar serum. He’s captured, but later recued and court-martialed, leaving him a shell of a man – his name and identity becoming a myth rather than a legend). There was also the idea in the comic that few people of the time had any qualms with such unethical experimentation, never mind even thinking the world would ever be ready for a black Captain America.

It’s not clear where the show will take that character, but his mere presence (and that of a grandson, Elijah who might also have some on-going impact) alongside the casual racism shown by at least one police-officer  – whose first reaction on the scene is to ask Bucky if Sam is ‘bothering him’ before being completely referential when he realises who they are – indicates an ongoing aspect about the modern world and how much or little it has changed for some.

There’s clearly a number of unclear agendas at work in the background of the story so far and there’s still no sign of Sharon Carter and only the briefest of glimpses of Zemo at the very end… but perhaps that’s all set for next week. So far, The Falcon and the Winter Soldier has a pacing and format that seems ‘safe’ in the wake of the ambitious WandaVision, but the talent involves and the on-point issues it raises amongst the obligatory spy-fi derring-do still seem worthy of watching… though with only four more episodes to go, one does wonder if it will be able to find a true and worthy balance between the subjects and styles it raises? 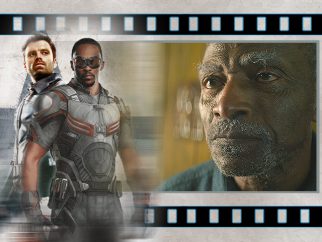