Captured and held in an isolated box-car, TWD's latest recruit has time to reflect on her options and responsibilities...

Princess, Yumiko, Eugene and Ezekiel have been captured by a bunch of soldiers, seemingly a frontline for a much bigger community. But held in individual box-cars, the group have to defend for themselves. Princess, already traumatised by past events, finds it hard to deal with the confined space and is conflicted as what to do.  She hears Yumiko’s voice coming from the next box-car and sees a weak boarding in the box-car walls that leads to Eugene and which might allow her to escape.

But is that what’s needed? ‘First Contact’ with this new group could go a number of ways and direct aggression might sour any future alliance. Are their captors simply over-zealously protecting their own borders or could they prove a real danger? Princess, refusing to answer their questions until she gets more assurances, remains unsure, her decisions splintered by her past experiences and her new responsibilities.

But when Ezekiel’s face appears through the box-car’s skylight, has her decision already been made?

While a majority of these extra Walking Dead episodes are choosing to use long-established characters, this week’s chapter lends its focus to the newest addition to TWD‘s universe: Juanita ‘Princess’ Sanchez. Paola Lázaro’s screen character, originally established in the comics series, appeared in the last run, a wild and wacky girl, carrying a pink boa and a machine-gun, who’d clearly been alone a little too long and was somewhat over-excited to have company.

As noted before, covid restrictions meant that all these extra episodes had to be filmed under stricter protocols and with less cast interaction than usual. Though there are appearances from other characters (Khary Payton’s Ezekiel, Josh McDermitt’s Eugene and – noticeably in voice-only – Eleanor Matsuura as Yumiko, with a scattering of Commonwealth soldiers and some fast-cut second-unit footage) this is very much a showcase for Lázaro as Princess has a series of debates with herself and others about what she should do. The train-car in which she’s held is a tight, enclosed space and it’s these kind of environments that tend to show off a performer’s skill, with close-ups and minimal movement required. There are escapes from the box-car (or are there?) but veteran Laura Belsey’s direction often makes strong use of stark lighting, shafts of light and shadow to really generate a claustrophobic mood. It promises much for Belsey’s turn helming the extra-episode finale Here’s Negan! in a couple of weeks’ time.

The “Commonwealth’ are never directly named in the episode, though with the next series being the last it seems obvious that the soldiers are connected and that we’re now entering one of the final chapters of the original comics. It certainly looks like everyone else is alive but in potentially dire-straits, but if the hole in the box-car wasn’t real it’s likely not a single interaction – except with the guard – ever happened, so it could be next season before we firmly establish the stare-of-play. However we do now know more about Princess and her background, elements given a little more room to breathe than you might have found in a ‘normal’ episode.

Splinter, like its other 2021 additions, walks that fine line – it’s unlikely that anything of true consequence will be more than teased in these extra episodes (it would be weird to see any of the regular cast leave or be killed off in episodes that were never really part of the plan) but they must find a way to hold the attention and be more than obvious filler. Tighter character-examinations, rather than huge leaps in larger story developments, often do the job to varying effects and this one works well. By the time of the last-scene reveal it’s not entirely clear how much of the preceding episode has been her imagination… a sliding-scale of Princess and her psyche coming to terms with the reality of her situation, both individually and in her her loyalty to her new friends… but it’s a sleight of hand that doesn’t feel inconsequential or a true deceit.

Even if it doesn’t push the narrative forward, this is solid character-work and definitely proves one of the more solid ‘extra’ episodes… 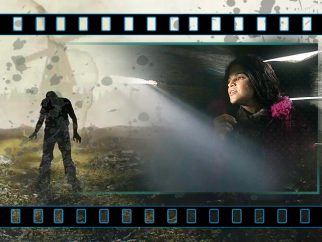