As The Smithsonian readies to receive the gift of Captain America’s shield and open an exhibition to the life of Steve Rogers, two of his frontline partners find themselves at respective crossroads as they try to figure out their own lives in the wake of his legacy.

For Sam Wilson (aka The Falcon) it’s dividing his time between dangerous missions that utilise his high-flying skills and spending time with his sister… whose troubles might not be on a global scale but factor into the aftermath of ‘The Blip’ that robbed so many people of their loved ones, dreams and security.  For Bucky Barnes (aka The Winter Soldier), it’s trying to forge a new life while still righting the wrongs of the past.

But there’s a potential new threat on the horizon that may bring them together. A group –  those who took advantage of those displaced years – and are  referred to as the ‘Flagsmashers’ would like the world to lose all its borders again and are willing to go to great lengths to enforce their agenda…

Meanwhile, the government has their own idea about how to fill the void left by an icon…

After two months of retrofitted head-scratching as WandaVision played out its metatextual magic, those tuning in to the second new title in the Disney+/Marvel television era  – The Falcon and the Winter Soldier – might have been curious as to what was going to be delivered. But given that this was supposed to be the first title in ‘Phase Four‘ (before covid shuffled the production decks) it probably shouldn’t be a huge surprise that it settles for being far more conventional:  a fun, stylish, but sticking-to-expectations introduction, playing to the MCU‘s strengths established in the movies.

Steve Rogers’ status isn’t explicitly addressed in any on-screen dialogue and you could be thinking that the Smithsonian ceremony is so formal that he has passed away from old age, given the events of Avengers: Endgame. However, those with American eagle-eyes and pause-buttons will be able to see that the exhibition that Sam and Rhodey tour – full of memorabilia of the Captain’s career – also contains fully-realised panels of text discussing his life and military career. One such panels does say that after losing his friend Tony Stark, that Rogers formally retired from his life as a hero. That certainly leaves enough wiggle-room for Chris Evans, whose face is featured a number of times on banners etc., to reprise the role in some form

Though it’s another MCU/Disney series name-checking the two heroes in its title – each buddies of original Captain America, Steve Rogers, but still navigating a way beyond his legacy – it’s interesting that this opener, New World Order, sets a lot of things in motion but keeps its heroes entirely separate with no sign of them intersecting, though inevitably they will. This first fifty minutes feels like the first fifteen minutes of a feature film format: a big action sequence to grab the attention and then showcasing the main personalities and off-duty priorities – establishing the current status of its two main heroes before the bigger mission begins.

Stylistically there’s different approaches, but versatile veteran television director Kari Skogland executes both both well. That airborne action opener featuring Sam (Anthony Mackie) swooping between planes, helicopters and desert cliff-faces feels like a Ridley Scott / Tony Scott / Michael Bay approach with plenty of explosions, stunts and quick-cut but immersive CGI (it’s genuinely hard to tell what’s on-location stunt-work and what’s added in post). It’s the kind of budget and scope that the otherwise impressive Netflix-era of Marvel shows could only have dreamed of,  but which lasts just a beat too long here for an episodic entrance. We also get a look at Sam’s off-duty time, helping out his sister Sarah (Adepero Oduye) trying to keep afloat in Louisiana… and finding that the Blip and good old-fashioned capitalism has run roughshod over plenty of people who don’t get the benefits of Stark-tech and superhero team employment. Though not explicably pointing to racism, a bank refusing to give Sarah a loan to save her business and yet still wanting selfies with the superhero sibling feels entirely topical with regards to cultural and big-business divides.

Bucky’s side of things is more cerebral. We do have an initial flashback to a Winter Soldier mission, but a majority of Sebastian Stan’s scenes are quieter, with him still dealing with the modern, mental repercussions of his time as an assassin. We move between his therapy sessions (with Bosch‘s Amy Aquino) and a friendship with an elderly Asian man, the origins of which are peeled away as we proceed. There’s moments of humour in the mix (particularly with the changing face of dating for a guy who is technically around 100 years old) but this side of things feels more like Doug Liman and Paul Greengrass’ work on the Bourne franchise with the idea of arighteous, but compromised and fractured man putting himself back together and ticking off a list for making amends.

The idea that the US government would want to fill Steve Rogers boots and costume and keep the ‘Captain America’ brand alive is one lifted from various chapters of the printed comics series in which Rogers had stepped away from the role. We only get a cliff-hanging intro to the new man in the mask, John Walker (played by  Lodge 49‘s Wyatt Russell) and certainly not enough to be impressed or get an idea of his persona, but if the show echoes some of those story-arcs of the source material, it will not end well for anyone.  The breadcrumbs to the other bigger mission that the series will pivot around come with mentions of an almost cult-like terrorist network that Sam’s friend Joaquin Torres (Danny Ramirez) is tracking down and which leads to him being beaten-up during the well-planned Thomas-Crown-like but brutal aftermath of a heist in Switzerland. Is this part of a Zemo-led plan as hinted in some of the marketing?  We know that The Alienist‘s Daniel Brühl will be back as  bad-guy Zemo (last seen in Captain America: Civil War) and Emily VanCamp will be reprising her role as Sharon Carter and  but short of end-credit graphics, there’s no sign or mention of either so far and with only six episodes (admittedly longer chapters than each WandaVision gave us, but amounting to a similar over-all running time), one hopes we won’t have to wait too long to see them.

It’s all well done, as ambitious and biggest-flat-tv-as-cinema embracing as you’d want – more than enough to keep the party-faithful (and more) tuning in through April… and it speaks to Disney and Marvel‘s cinematic-turned-televisual investment – but to be the real sum of its parts, it feels like the series’ real magic may be in the chemistry of its two leads on-screen together as soon as possible (which was such a key ingredient in WandaVision)… and so we wait, popcorn in hand. 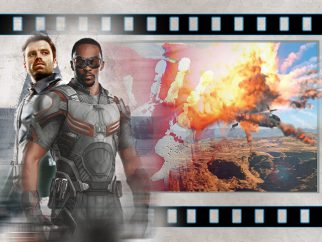