It's a case of Portents and Portals as 'Debris' explores Time and Relative Dimensions in Ohio...

Beneventi and Jones are called to a field near a cell-tower in Ohio where something strange, even by the team’s standards, appears to be happening. There’s no sign of any debris but what there does seem to be is an opaque wall in the air… and through it can be glimpsed human figures that clearly want to get out.  Despite the feeling that  the window only has two dimensions, it’s plane can be walked around defying logic and known dimensional understanding.

When local electronic devices pick up a cry for help from within, the team discover the identity of one of the figures. But ‘Nicole Hegmann’ has been missing for years, long before the cosmic accident that is sending debris to Earth. Beneventi and Jones must find a way to work out what the portal is, keep it stable and then work on a rescue plan. But can Nicole and her father be reunited before time finally runs out…

By now, the quality of Debris is obvious – each week seems to have a sf concept that would work well as a standalone feature-film but which NBC delivers with style, wit and squeezing every penny of its budget squeezed into 44 minutes… and still manages to drip-feed a background conspiracy angle. And from the start, the third episode, (rather abstractly-named Solar Winds), continues the same standard, offering wonderfully creepy imagery (a shadowy figure peering out from an apparently 3D environment through a purely 2D surface – like an eerie two-way mirror), a sense of growing urgency and enough technobabble to be intriguing rather than bewildering.

But if there was any doubt of the X-Files/Fringe lineage to Debris or in the very wide remit that a ‘phenomena of the week’ scenario offers, then this entry really extends the borders in more ways than one.

Dealing far more with the idea of invisible dimensions and a Bermuda Triangle concept to explain how people might go missing – by literally falling through cracks in the universe – rather than the flotsam and jetsam scavenging of the show’s title, even the characters themselves have dialogue here that questions just how connected this instalment is to their mission statement. After all, the missing girl at the heart of this story has been gone for a couple of years, long before the debris of the title was even a twinkle in the heavens. Ultimately the mysterious portal’s origin is explained in somewhat mundane fashion, conveniently a confirmation of theories about ‘new dimensions beyond human perception’ first suggested in a book by Jones’ missing father… and now found to be simply and coincidentally made visible by an otherwise unconnected splinter of debris. However the sheer scale of the physics-changing dimensional discovery as a historical breakthrough does seem to be slightly shrugged-off as an ‘interesting observation’ once its pesky side-effects are dealt with and some of the missing ‘returned’. Maybe it will resurface later given the chair-portal’ing activities by possibly compromised CIA boss Maddox (Norbert Leo Butz ).

As previously noted, all episodes so far have dealt as much with earthly emotions as they have with extraterrestrial tech. That angle remains true here –  the faraway-so-close aspect made genuinely haunting and melancholy when each side of the dimensional rift is aware of the other but just askew enough to  prevent proper conversation. In some ways it echoes Poltergeist or the EVP sessions in ghost-hunting shows and it’s also duly noted that the the connective tissue between the trapped Nicole Hegmann (Sarah Desjardins) and her helpless father (Christopher Shyer) is strongest when their bond is put under strain and is an important part of the ultimate resolution. It’s that emotional edge that continues to distinguish the show.

Jonathan Tucker and Riann Steele continue to impress, a dynamic duo without being the lazy tropes that  the genre can sometimes deliver and each week adds a little more to their working dynamics. Other side-plot developments (Maddox’s dodgy associates, the uncertain fate of Jones’ father and the activities of the rival team looking for the debris) all get air-time and though there’s now more questions than answers, one hopes the drip-feed elements will start to coalesce as we continue.

It will clearly have been an entertaining Monday in director Rebecca Rodriguez’s household as this chapter of Debris on NBC comes to the screen in the hour after her most recent helming of Snowpiercer, on TNT… each a very different series within the slightly-fantastical, but humanity-based viewpoint. It’s still hard to know the over-all,  trajectory of Debris, even in vague, abstract form, but each individual chapter is stylish and enjoyable in its own right and for a few weeks more that may be enough… 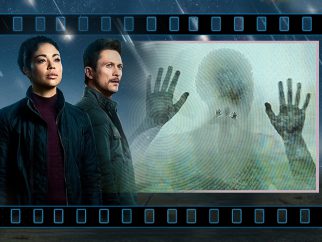