Maggie may have something to say to you, Negan. Lauren Cohan returns to TWD...

After a long time away, Maggie Rhee (Lauren Cohan) returned in the nick-of-time to help turn the tide against the Whisperers, but now she has to assess whether she’s going to stay. The presence of Negan (Jeffrey Dean Morgan), apparently walking around free, does little to calm her nerves, but when an attack on her own camp leaves mass casualties, it would seem that she needs the help to find survivors and her own son.

Maggie’s faced some serious hardships, but she’s a pragmatic leader… now, will old friends and new ones be able to offer their own help in return?

As most viewers know, The Walking Dead‘s production schedule was affected by covid, but unlike most shows it manged to more than rise to the occasion by finally getting its delayed Season 10 finale on air and then adding another six episodes to bridge any gap. While these additional episodes are all set to feature familiar faces, each will tend to focus on a smaller group or individual – which works on both a creative level and also makes sense under current safety protocols.

The first of those ‘bonus’ episodes arrived on AMC this weekend (technically, a week ago if you are a subscriber to their digital platform, but we didn’t want to spoil!).

There’s plenty of regulars in the mix for Home Sweet Home but despite the presence of Daryl (Norman Reedus, Carol (Melissa McBride), Kelly (Angel Theory) and glimpses of Negan (Jeffrey Dean Morgan) – this is very much Maggie’s story. Unlike some of the entries to follow (which may depict  some of the unknown events created by the ‘lost’ time between/before previous key stories) this doesn’t show Maggie’s years away from the main group but seeks to reintergrate her into the narrative.  In reality Lauren Cohan departed The Walking Dead for the ill-fated caper-show Whiskey Cavalier in 2018/2019 but in TWD the time-jump for Maggie was nearly seven years of being away (if in sporadic contact) from her friends. Her sudden, belated return helped win the fight against the overwhelming Whisperers at the very end of Season 10 but Home Sweet Home gives us a feel of how Maggie has changed – with some comments about recent events in her own camp – and if she’ll stick around (Spoiler: yes, she will).

Though it’s ultimately a smaller part of the episode, one of the inevitable key scenes comes with her realisation that Negan is walking around free.  Negan, of course, brutally and willfully slaughtered her husband Glenn – Steven Yeun – with his baseball-bat Lucille, simply to make a point. However Negan also since spent over five years in a jail-cell and recently saved a lot of people by taking down Alpha, (Samantha Morton as the leader of the Whisperers) but though that’s earned him some trust, there are many who will never forgive him for his past sins… and it’s rather obvious that Maggie would willingly end him permanently and at the first opportunity. But we also get to see Maggie-the-Pragmatist. She understands that group decision as much as she resents it, though it tears her up inside. Cohan’s silent glare at the man she hates speaks volumes and proves how good it is to have her back in the fold. (Her interaction with Kelly  – on a verbal and sign-language level and a bond over their separate but similar losses also works well).

For a while it looks like Maggie’s masked friend Elijah (Okea Eme-Akwari) might be another take on the ‘mysterious figure’ personified by last year’s Beta, though this time working on the side of the angels. So it’s interesting that the ‘mystique’ is resolved much sooner than expected as Elijah, for all his fearless actions, turns out to be willing to remove his shield against the world and be someone far more fragile than you’d think.  We’re also introduced to a threat called the Reapers, who have attacked Maggie’s people in the past. On discovery that her team have had to flee an assault on their camp, there’s another attack by an  un-named sniper who initially seems more than a match for the group. Even when revealed from the undergrowth he’s a big brute of  a guy covered in kevlar. When he’s finally defeated, he doesn’t take the idea of captivity well and kills himself with a grenade. If he is – as he seems to be – a member of the Reapers, they seem to be a serious threat to the survivors and as driven as any antagonist they’ve faced so far.

There’s few light moments here – more a doubling down on the series’ mission-statement with a few hints about where the show is heading (a brief promotion at the end signals that the ‘Commonwealth’ story from the comics will be arriving later this year). However, when we meet Maggie’s son, Hershel (named after her father and played by Kien Michael Spiller) he’s impossibly cute and a moment of levity amongst the earnest gloom.

It seems life isn’t going to get any easier for the survivors of the zombie apocalypse, but it’s good to have them back a little sooner than expected. 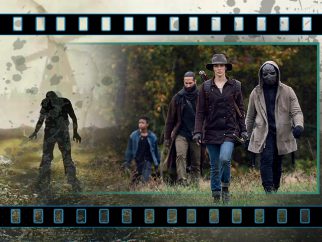