With their day-jobs down-sizing, can Clark Kent and his family really return to Smallville?

Clark Kent appears to have everything he’s ever wanted. A purpose, a marriage, a family and a legacy. But even super-powers don’t mean you always find the perfect balance – all too often there’s a problem in being everywhere he needs to be. He can save the world but can he be there for a PTA meeting?

Changes at The Daily Planet could mean no more reporting duties for Clark, then even more serious events mean a return to Smallville… and there’s further revelations about Martha Kent’s financial state of affairs that cause immediate concerns.

The opening sequence, essentially detailing the events that it took Smallville eight seasons to cover, is wonderfully nostalgic with quick detailing of ‘Baby Supes’ arrival, his teenage years and then his first appearance as Superman. As with that classic Superman ‘Action Comics #1‘ cover, he descends from the heavens and stops a classic green car, raising it above his head and all the while boasting an early version of the ‘S’ outfit that he tells a young bystander ‘my mom made for me’. It all feels like a mission statement of deliberate intent, that in a world currently awash with anti-heroes and a blurring of the lines, this is a straight-and-true hero trying to do the right thing for the right reasons.

But it is also interesting that for a show that feels so completely nostalgic (in a good way), it’s also filled to the brim with a to-do list of Twenty-First Century maladies and concerns. The farming crisis, job losses, ADHD, medication, balancing family responsibilities, and parenting, familial loss and even discussion of attempts at suicide.  It’s all here in the pilot, sometimes jostling for space, sometimes fitting effortlessly together. So it’s not quite your parents’ Superman… except that’s exactly what it is as well. It’s nostalgia, the Man of Tomorrow making peace with the callings of yesteryear.

The show quickly lays down its groundwork and status quo – that Clark’s alter-ego to known to Lois (obviously) and her father General Lane (perhaps slightly less obviously to newcomers) but his sons (perhaps far less obviously) don’t have a single clue about their father’s ‘second-job’. Until… everything changes.

Before the first commercial break  Clark (as Superman) gets to stop a nuclear-plant from suffering a meltdown – in a suspicious ‘accident’ that we know we’ll be addressing again later… and then heads home to spend quality time with Lois and their two twin sons – the latter proving a more perilous predicament than any radioactive isotope or super-villain. Clark wants to be a good father and he is – given the circumstances – but duty often calls him away at key moments.  Clark and Lois have disagreed about the decision NOT to tell Jonathan and Jordan about their half-alien lineage, Clark remembering the growing pains he went through and aware that if his children (or either of the boys) manifests powers then it will change them and their relationships forever.

Jonathan (Jordan Elsass) is fairly well-adjusted, blond-haired, blue-eyed  jock with an impressive turn on the field (which his parents begin to suspect might be an ‘enhanced’ benefit, but Jordan (Alex Garfin) is more of an outsider, darker hair, less confident and no stranger to therapy. If you’ve guessed that at least one of them does share some of Superman’s powers you’re right and if you know who exhibits the powers in the pilot, you’re likely one step ahead of the pleasant if predictable plot.

Lois and Superman is a show of two halves, even beyond the branding. Yes, the parents are the title stars and there seems to be plenty that will keep them occupied. But beyond them, there’s something of the inevitable CW template attached to proceedings – the half of the show that will be dealing with the younger members of the family( and the obligatory lists of teenage angst to which the CW has as a contractual obligation). The main fault-lines may be on how the show divvies that up going forward, but the pilot itself pretty much has something for everyone.

I’ll be honest that I had my doubts about the main casting, but Tyler Hoechlin essentially nails the duality of the character from the outset. Indeed, as Clark he’s channeling the Christopher Reeve factor better than almost anyone since, while adding touches of his own. Director Lee Toland Krieger keeps things moving at a brisk, if sometimes somber pace and homages certain iconic scenes throughout, without it feeling like pillaging the archives or using them as a crutch… and the result is one of the best aspects on show. Elizabeth Tulloch as Lois also has that certain something in early scenes that reminds us of Margot Kidder’s interpretation, even if – technically – this version is a little wiser and settled at this point in Lois’ life.  But she’s somewhat underserved in the pilot, an episode that seems far more concerned with setting up Clark and his sons’ relationships. It’s interesting (and good) that this Lois seems to immediately put her family ahead of her Putlizer-tempting career in their time of need, but other than that early moment in the bullpen, one wonders where the series will give us more of the go-getter, acerbic Lois as any real sort of peaceful  domesticity seems an unlikely avenue. (And the pilot leaves it unclear if Lois has also lost her job – the nature of the Kents’ move seeming to suggest that, but never officially clarifies it and that could be important…)

It seems possible that this interpretation of the legend could rise to new heights, but equally a danger that it could fracture along its fault-lines or fail to entice both the young/nostalgia demographics for which it seems to be aiming…  it will certainly need to make better use of Tulloch/Lane (given her name’s in the title!) and build its own mythology (the mysterious ‘Stranger/’Captain Luthor’ reveal and the obvious groundwork for a different foe in billionaire Morgan Edge are an interesting start to a series that keeps the rest of the Arrowverse at arms length after first spotlighting the title characters in the Crisis crossover).

But the pilot is a heartfelt, deftly-executed love-letter to all the good things we know of the Superman mythology –  an up, up and away trajectory with a grounded philosophy and there’s definitely potential in a show that unapologetically IS in Kansas any more. 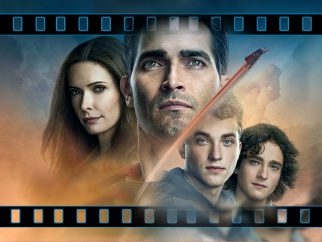