The new CBS series is very promising, though the silence on its most obvious ingredient is notable...

For many, Clarice Starling (Rebecca Breeds) just got lucky – a junior FBI agent who helped catch a serial-killer by being in the right place at the right time and somehow managed to survive. It’s now 1993, a year on from the Buffalo Bill investigation (and her interactions with another notorious killer who got into her psyche) and Starling wouldn’t bother to argue her merits. She’s rather be left alone, shift through paperwork and avoid the PTSD sessions with her appointed psychiatrist.

But those in higher positions see the value of her fledgling reputation and when the influential Sen. Ruth Martin (the ambitious mother of the young woman Starling saved from Bill’s clutches) demands Starling be the ‘face’ of a new investigation, it’s an offer that the agent is made aware she cannot refuse. She neither desires to work with the assigned team or they with her and new boss Paul Krendler (Michael Cudlitz) is still waiting to be impressed – preferring to sideline her when she’s not in front of the press. But in the wake of mounting bodies Starling’s initial profile doesn’t fit what her higher-ups want her to say and she’s once again put in a position of not being able to show her worth to those who think she’s worthless.

As pressure mounts from all sides, Starling may have to draw on past traumas to survive her new role…

If you you were asked for one of the most successful psychological thrillers of modern cinema, you’d likely find  The Silence of the Lambs high up on the list. The 1991 adaptation of Robert Harris’ novel into a multi-Oscar-winning movie (featuring, of course, Anthony Hopkins as Hannibal Lecter and Jodie Foster as Special Agent Clarice Starling) is now a cinematic milestone and a work of legend. It would be equally true that the characters were rarely better than in that adaptation. There’s an argument that 1986’s more sterile Manhunter, featuring William Petersen as Will Graham and Brian Cox as a very different Lektor – as it was spelled then – was an effective version of Harris’ previous Red Dragon novel, but very little can be cited that makes the likes of 2001’s Hannibal (Julianne Moore taking over after Foster perceptively declined the sequel) or the 2002  Red Dragon re-do (with Hopkins and Ed Norton) movies fit for anything other than financially opportune purpose. In 2013, a NBC series, Hannibal, (with Mads Mikkelsen as Lecter and Hugh Dancy as Will Graham) a grand-guignol venture loosely based on the early years – was well-received in and of itself but lasted three seasons before cancellation.

So, however good the characters and however talented the cast, it’s clear that catching lightning in a bottle (or fava beans in a census-taker) is some kind of dark alchemy that’s more than its mere ingredients. In that case, the very idea of bringing Agent Starling herself back to the screen was a risky proposition fraught with as many cons as pros. Nevertheless, this week’s debut of Clarice on CBS suggests there’s still some blood in the vein…

Going in to the pilot you’ll naturally wonder if the Lecter Legacy will overshadow everything, a famous protagonist only being defined by their infamous antagonist?  The answer is yes and no.

A problem here is that the pilot sprinkles in many specific mentions, even imagery, of Buffalo Bill (the actual serial-killer Starling was pursuing when she seeks Lecter’s help in The Silence of the Lambs) but only refers to Hannibal Lecter in abstract un-named form. The real reason for this is that the show has the rights to all characters originating in The Silence of the Lambs, but as Lecter originally appeared in Red Dragon his moniker remains just out of legal reach. But whatever the legal complexities, there remains the obvious pragmatic hole in the heart of the narrative – a series about a character whose past experiences with serial-killers is always going to be somewhat hobbled when you can’t name her most significant encounter and the reason for her state of mind. Thus almost all that PTSD is seen through the ‘Bill’ investigation’s debris which is disingenuous to the character and the fuller history that so many of the people tuning in already know. It’s like saying you’re going to have Skywalker Star Wars stories that skirt around anything to do with Darth Vader or Batman tales that simply note that some laughing, green-haired villain was once a problem… it’s solid mythology potentially diluted to merely transient myth.

But if you can accept that absence as simply a legal necessity – and, yes,  it’ll be an ongoing battle – then you have to judge Clarice on its own merits and there are many. Rebecca Breeds, an Australian actor presenting a decent West Virginian twang, is a solid enough Starling, a person whose innate intuition and ability to profile makes her acutely aware she doesn’t want to keep experiencing the events of the past and the guilt she carries. Give her a desk-job away from the front-line and she’ll not be happy, but happier. But, more than ever, she also hates other people manipulating her – which includes the FBI and politicians and the resentment she feels at being their puppet is palpable. When she’s seconded to another potential serial-killer  investigation merely as a showpiece rather than a serious part of the taskforce, she hates it as much as those with whom she’s now asked to work. It’s that battle between self-worth and damage that the show seeks to mine and Breeds is clearly unfazed by any comparison she’ll get to Foster’s performance.

Even given the uneven nature of the landscape, Clarice still feels like rich territory. It’s a period-drama (set in 1993) but never feeling an overt need to showily proclaim its era other than in social-nods and the ideas that prejudice of skin and gender is nothing new. It’s a decent if fractured link to the original concept – ideal for those who know the tone of the source material and perhaps want something that feels like a cross between Criminal Minds, True Detective and  Prodigal Son without the latter’s growing dark humor. It’s all quite slow-burn, the idea of both individual investigations and a possible wider conspiracy to hide certain facts. As a procedural it is arguably less overtly dynamic than NBC Hannibal, but deliberately so and in modern times it’s a different and more difficult task to reinstate the hero as the focus rather than lead with the easier hook of a flamboyant villain.

Last week a flashy, simplistic-but-fun  Equalizer re-do was the talk of CBS schedule, but this other blast-from-the past is very different in execution. So far it feels like Clarice is planting her more steadfast feet as an agent and as a series. The foundations are there if not entirely firm… and things could still go either way, especially with a supporting cast (including Kal Penn) yet to shine…  but the  good news is that Clarice isn’t a lamb to the slaughter anymore… 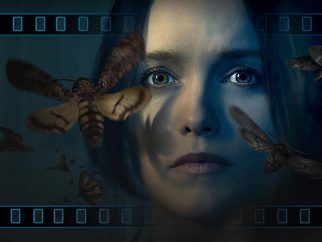 WandaVision: On a Hallow’ed ground full of easter-eggs…