The very different MCU show moves into technicolor and delivers some unexpected complications...

Time is an illusion, pregnancy doubly so. Wanda’s unexpected and impossible condition continues at speed as technicolor comes to their not-quite-picture-perfect world. There’s little time to note the changes in the world around them, or the fact that their neighbours haven’t aged a day… because hours after discovering she’s expecting, the unexpected situation is Wanda is nearly full-term and about to deliver.

And yet, amid all the zany confusion, isn’t this all… wrong?  Vision finds himself continuing to question events and ‘family-friend’ Geraldine seems to recall events from Wanda’s past that she shouldn’t know.

And what of Wanda herself? Just what will she do to protect her growing family?

The main obstacle here is that while the first two episodes (shown last week) excellently establish the conceit and ‘wrongness’ of familiar Marvel heroes living in what appears to be a fabricated sit-com inspired environment with sinister undertones, the third has the awkward remit of continuing both aspects without becoming becalmed… and yet not laying out all its cards.  The attention to period-detail and design is admirable in every technicolor detail yet  the shift to a 70s style environment (the touchstones being the likes of The Brady Bunch and The Partridge Family) isn’t really enough to prevent a feeling of frustration at the lack of momentum. Bettany and Olsen are just as committed to the proceedings and just as enjoyable, but now we actively KNOW the facade exists, the sit-com scenes begin to feel like a holding pattern, quite literally set-dressing to the plot and immediately they become less engaging as we tap our fingers and click our heels waiting for some further clues to this over-the-rainbow experience.

I could happily have sped through the entire season and its run of thirty-minute episodes in a couple of days and praised its many virtues and tricks if they were available en masse, but it’s easy to see why some people may be jumping ship early. The key demographic of the MCU has been those who like a real sense of kinetic pace and spectacle and ninety minutes in there’s really none of that here so far – it’s still all set-up. Yes, the black and white episodes/eras reflected the distant otherworldly feel of the 1960s and were classic merely by their monochrome presentation but with the arrival of a wider selection of pigments (hence the episode’s title: ‘Now in Color‘) and a 70s tone, it hits an era for which a huge swathe of the audience will feel far less nostalgia. As someone who has some very early memories of the era, it simply feels dated more than nostalgic. This is only the third episode and we know we have at least two more ‘time periods’ to see (next week: the horror of the Eighties!) before we get any real answers and it feels questionable that the show can maintain its balance.

It’s neither a feature-film which would pace the same story more briskly nor a long-game television season that we’d fully expect to move gradually…(a Twin Peaks with spandex?) and rather than its nine-episode-format being the sweet-spot between the two, it’s hampered by being neither, like watching a good story artificially stretched or condensed depending on your pleasure.

That’s not to say there aren’t some tantalising moments, merely that its slow-delivery system on a weekly basis rather than a wholesale being-worthy experience, feels evermore another miscalculation. Despite Vision beginning to have doubts about ‘reality’, it seems that Wanda is – consciously or subconsciously  – avoiding any interruption to the world around them – rewinding, erasing or expelling any element that threatens the status-quo. That could also be another element lifted from the comics-continuity where Wanda’s powers grew out of control, to the extent that she literally decimated the number of mutants in the Marvel world. It’s doubtful that the series will want to create an outright villain out of her, but there’s certainly room for some moral quandaries and the idea that she’s the guiding hand within her own ‘prison’.  And we do know for sure that West View is a physical place – seemingly existing under a dome/shield, away from the ‘real’ world… and from which Geraldine/Monica finds herself booted at episode’s end. Hopefully we’ll start to see more from outside the town, as the trailers indicated.

There’s lots of questions and hints (especially for those who know comics continuity) to enjoy but the drip-feed dynamics distract and frustrate.  However, that might be – with the acknowledged irony of it all – a pointer to how television has changed in not just what we watch but how we watch it. If so, that makes WandaVision even more meta in ways that matter… 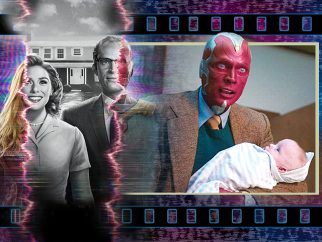