Chloe Grace Moretz is the best thing about a wholly amateurish effort that fails to even rise to B-movie status...

It’s 1943: A young woman with a mysterious case rushes to board a B-17 Flying Fortress heading to New Zealand, presenting orders that only vaguely outline a secret mission. Maude Garrett (Chloe Grace Moretz) refuses to give further details but has no choice other than to entrust her case to one of the crewmen when she’s forced to endure hours alone in one of the gun-turrets. She’s separated physically from them but can hear their idle chatter over their radio that leaves no doubt about their feelings towards their ‘passenger’.

Garrett sees a creature on the wing but the crew, already finding holes in her original story, don’t believe her talk of a ‘gremlin’ – even when she also saves them from incoming Japanese fighters. As tensions rise, Garrett finds herself having to deal with dangers from the crew and the creature, inside and outside the craft… which are only compounded when her case is opened and a complicated truth exposed…

Some films are so bad that they’re good, but Shadow in the Cloud, out this week on VOD and a few open multiplexes, is singularly awful in almost every conceivable way.

Proceedings begin, before the opening credits, with a wartime safety cartoon informing the audience to work hard, keep watchful and trained and generally avoid those generic, demonic ‘gremlin’ excuses –  which for some inexplicable reason is in glorious colour rather than grainy black and white to which it would be better suited. It’s a creative decision that feels ever so slightly misjudged but it turns out to be the first of many ‘quirks’ and the least of the film’s worries.

Movies often play hard and loose with technology and physics and – for the sake of a good set-piece – it’s often forgivable in the moment, but almost every frame of Shadow in the Clouds is eclipsed by a basic lack of understanding of everything involved and a disinterest in investing in such. Max Landis (son of John) and Roseanne Liang’s script does not seemed concerned with such trivials, essentially working off the ‘Wouldn’t it be cool if this happened next…?‘ method of see-what-sticks film-making. That’s wonderful when an original, inspired choice  works against the odds but looks acutely amateurishly slip-shod when it falls apart like it does here. Entire radio conversations take place with people talking over each other, interrupting or finishing each other’s sentences without pause (which is just not how radios work – not even today and especially not back in the 1940s)… and again, it might be fine if it such conversations weren’t the sticking-tape convenience of the entire first act. The cameras remain on Moretz during that time as the rest of the crew argue in the main cargo area above her locked turret housing and for a long while all we get is  strangely-lit imagery of their faces and a string of voices-off full of ongoing explicit vulgarity and misogyny which belabours its sexism point and just becomes banal and offensive long after the point has been made. Moretz, to her credit as actor and character, holds her own and just gets on as best she can in claustrophobic conditions.

Moretz is the best thing in it, but that’s grading it on a curve, especially considering that or large stretches the rest of the cast seem to have been furloughed. The talented actor already established her Grrrrl-Power credentials in Kick-Ass, the Carrie remake and a range of other projects, but here she’s asked to carry the whole picture as it crumbles around her and this time she can’t convince and after much derring-don’t, a last-reel slugfest with the creature in question is bizarre.

The action outside the plane is largely an insult to basic intelligence. The ‘gremlin’ is a derivative monster with no reason for its actions except following a script where it appears when necessary to distract. When dropped or falling, objects plummet straight down even though the aircraft is travelling at high speed; while carrying her precious cargo Moretz is able to swing along the under-carriage from hand-hold to hand-hold  – upside-down, no less – before flipping herself back inside while the plane speeds along… and at one point she falls only to be blown up and back directly into the hold by a Japanese aircraft exploding below. At this point even Bugs Bunny would be rolling his eyes. The film seems pitched on fantastical mystery, but doesn’t commit to any explanation of the ‘gremlin’ and squanders the mystery of the cargo with a revelation that’s unlikely, ill-fitting, explained in audio (requiring more exposition) and makes everything thereafter seem like abuse of its own kind.

Somewhere deep inside this film is the core of a potentially good idea – a divided wartime flight crew having to deal with a secret mission and a fantastical enemy – but the result feels vapid, like an episode of The Twilight Zone made by a distracted intern left to their own devices. So who is at actual fault here?  It feels like haphazard editing is to blame, but the truth seems to come much earlier. Max Landis has long been a lightning rod for controversy off-screen and recent allegations of sexual misconduct (which he’s refused to address directly)  saw him dropped by his own management and have done nothing to alter opinions. However Liang and Moretz have distanced themselves from him and said the film script they shot was considerably reworked away from the short 70 page original Landis presented. But whether that later reworking saved existing disparate elements or merely fractured a vague and flawed blueprint even further, it remains a mess of tone and intent that must lie largely with Liang and a wham-bang implosion of genres that never stop to explain themselves or coalesce into something more. As a crazy, messy, silly mash-up of ideas, it  might have been suitable for kids if the language wasn’t so adamantly nasty and adult.

There’s simply nothing to recommend here, which is a shame. 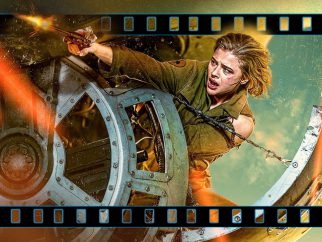 The Doctor is… out? UK media says regeneration coming…