Emerald Fennell's provocative new revenge thriller deserves all the conversations and debate it will bring...

Cassandra Thomas (Carey Mulligan) is a young woman who, from the outside, seems strangely satisfied with her becalmed life. Once a promising young doctor on the fast-track to success, she now works at a coffee-shop and snarks with her colleagues and customers and lives at home with her parents. However some nights it’s very different… she can be found apparently barely able to stand upright in sleazy bars, often taken home by opportunistic men who promise safety but want something far more basic. But Cassie demeanour is an act designed to humiliate the predatory males who would take advantage of a woman unable to say no and she has no problem in exposing their attitudes and behaviour.

When Ryan (Bo Burnham), a fellow student from her medical days, reappears Cassie is frustratingly charmed by his self-deprecating behaviour that seems totally at odds with her view of the entire male gender. However his slow and gentle pursuit of her comes at an unexpected price when he mentions that another of their old colleagues is back from Europe and about to get married. The man in question holds the reason that Cassie ended up on her nihilistic journey and now she has a very specific set of targets and no qualms about setting them in motion.

But at the brink of finally moving on with her life, will her newfound focus and plan for revenge provide closure or cost her everything?

Promising Young Woman is one of those impossible-to-ignore films that asks you to balance cause and effect, to make you a complicit passenger in an ever-darker journey that simultaneously keeps your eyes on the road yet will have you nervously eyeing turn-signals and the off-ramp, increasingly unsure of your moral bearings. This isn’t new territory per se… one can trace such edgy lineage through the likes of Michael Douglas and Joel Schumacher’s Falling Down (consider this, perhaps, Falling Over), Elliot Page and David Slade’s Hard Candy and more recently  Joaquin Phoenix and Todd Phillips’  Joker… social-commentary-laced outings with central figures as victims and predators and with behaviours that the audience will be divided about by the time the credits roll.

It’s an unsettling film, deliberately so and many male viewers may shift uncomfortably if they’ve ever been drunk, disorderly or remotely opportunistic in their younger days…and for the first third of the film it feels like that is the sole intention, to invoke a long overdue debate about the sometimes grey areas of conduct, entitlement and double-standards – especially when alcohol is included in the mix. But as much as you admire the in-your-face representation and shaming, one initially wonders if the robust stance can become a resolute story. As much as you cheer Cassie’s verbal takedowns of predatory men caught in her headlights and her delightfully snarky day-time banter with her work colleague and customers, there’s also a nihilistic sadness at work, an inability to move forward with any joy her own life. Her becalmed existence has become a dangerously cyclical routine and there’s a risk that this will just be a provocative ‘All men are bastards’ story‘ with nothing else to say.

But Emerald Fennell’s script and direction slyly evolve from social commentary to revenge drama without losing steam or impact. Events conspire to propel Cassie’s crusade both backwards and forwards as we unpeel the events that set her on this course and why her somewhat indiscriminate methods are about to become more sharply focused.  But just at the moment when she might be able to start redefining herself as more than just a promising young woman who once stepped away from her potential career, she learns of information that allows her to hone in on those individuals who set those things in motion  – subversively or conveniently – and the film pivots around her conflicting choices about what is most important to her: punishment or progress.

Emerald Fennell has been previously better known as an actor (Call the Midwife and playing Camilla Parker-Bowles in The Crown) and as an executive producer on Killing Eve, but as the writer and director of Promising Young Woman (her feature debut in those roles) it’s clear she has a promising second and third string to her bow. Mulligan herself is award-winningly perfect, as ever. She’s a mesmirising actor with an astonishingly impressive resume that encompasses everything from Doctor Who (as Sally Sparrow in the classic Blink) through to 2009’s Oscar-nomination for An Education then Shame (2011), The Great Gatsby (2013) Far from the Madding Crowd and Suffragette (both 2015) to name but a handful. She’s inhabited so many skins and genres and is able to slip like mercury between  ingenue, furious, hilarious and melancholy with fluid ease. Here she looks barely out of her teenage years in one scene and in the next as if carrying the weight of the world on middle-aged shoulders. Some of that is her character’s scripted deceptions, some of it the actor’s own subtle triumphs but she holds and owns every moment. Though it’s Mulligan’s movie throughout, there’s able support from the likes of Alfred Molina (uncredited), Laverne Cox, Jennifer Coolidge, Alison Brie with Adam Brody and Christopher Mintz-Plasse as two early targets.

Tonally Promising Young Woman, despite all the talent at work, may not suit all. Structurally, the film becomes divided into ‘acts’ and there’s several shifts along the way, not all of which work seamlessly (though all contribute to the greater whole). In demonstrating the shattered world Cassie orbits, we see moments of anger, frustration, family-awkwardness and humour.  Some scenes are tense and angry, others would genuinely work as pure romantic comedy (the blossoming romance and chemistry between Cassie and Bo Burnham’s Ryan is sweet and palpable and as an audience you yearn for this to steer an already dark film into easier territory – all the while noting at the clock that there’s a third of the movie left and wondering not if but when the inevitable implosion is going to happen).

Interestingly Margot Robbie is one of the film’s producers. Robbie – a talented and versatile actor in her own right  – is, of course, known for her role as Harley Quinn, the rainbow-haired, bat-swinging villain of the DC universe and original paramour of the Joker. Quinn’s always been an uneasily easy sell in the comics and films – given that particular version of the ‘crazy/sexy’ label that shuffles between kick-ass woman and overt victim of physical, mental and sexual violence who’s fully invested in the Stockholm syndrome. The story of Cassie isn’t the same, but clearly there’s an sense of askew justice that has turned  into obsession and keeps escalating… and when she dons a multi-coloured wig for her end-game persona, well,  the Quinn motif still feels apparent, even in the more grounded circumstances. Earlier she smears her lipstick across her cheek like The Joker himself, but though there’s a suspension of disbelief needed for moments in the thriller, there’s continued assurances that this isn’t being played for mainstream action set-pieces, just human pain.

While it’s true that it is difficult to find a single uncompromised and truly sympathetic male figure in the entire piece (perhaps only Clancy Brown as Cassie’s father), this never becomes a simplistic ‘Death Wish‘ vigilante outing some might fear or the titillating movie suggested by the artwork on one of its unhelpful painted poster images. There are stereotypes and broad-strokes here among the nuance but the story’s eventual remit eventually  feels more like a Count of Monte Cristo set-up… with the knowledge that no-one gets out of tragedy unscathed. It’s also one that genuinely tends to pivot in unlikely but often satisfying ways, keeping you off-balance as you anticipate one thing and often get another – which is a rare treat. Though not perfect, this is is a film that will certainly provoke audience conversations about both the subject, the execution and its ultimate resolution (even some of the reviews themselves have caused debate)  and in that sense, it’s likely to deserve all the attention and awards that seem to be inevitable.

It’s unusual position of bucking the trend and not heading directly to VOD platforms, instead landing in the few screens still open to the public means it won’t get the full audiences it deserves immediately, but it is worth seeking out when you can.

Promising Young Woman is currently playing in select AMC theaters in the US and is due in cinemas in the UK in February. 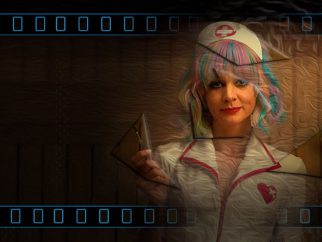