The new adaptation of Stephen King's classic apocalyptic tale is timely, but how does its pilot play out?

When a deadly virus is ‘accidentally’ released from a research facility, the results are fast and deadly. Nicknamed the ‘Captain Trips’ it is more infectious than the common flu and with a consistently sifting structure, all medicines seem useless. Within days, the death-toll from the pathogen rises and the country falls into chaos. But out of the horrific event, other forces gather. Some have put the events into motion, others seek to save humanity, but in the days, weeks and months to come it will likely be a group of far more ordinary citizens – special only because of their immunity but who are unaware of the forces at work to manipulate them –  who will have to make fateful choices and decide whether they stand with the powers of dark or light.

One way or another, they will have to face the dangerous new world, their inner demons and heed the call to finally, once and for all, make their Stand…

A story set in a contemporary America where people are faced with a sudden change in their lives because of an unprecedented medical emergency is, of course, the perfect production for 2020 and though the virus in The Stand is way more lethal and visually obvious, it’s likely that every single viewer will shift a little uncomfortably given the real scenes on the news and a rising – if more subtle – death-toll. That being said, various versions of the book’s story have placed the events in several previous decades, so the concept remains sadly timeless. But does this CBS All Access adaptation hit the mark?

The lingering fact about Stephen King adaptations is that their varying quality is often down to the casting. There’s plenty of excellent, best-selling stories that work well on paper but simply fail to ignite the screen because there wasn’t the charismatic lead or that the budget failed to live up to its needs. Look to the biggest and best adaptations and it’s often the cast bringing their A-game and making their mark that makes the real difference. Here, it seems that though there are a number of big names involved, the decision has been made to place them as iconic archetypes and support structures. In the pilot, the personification of both sides (Whoopi Goldberg as Mother Abigail and Alexander Skarsgård as Randall Flagg) are barely there, just enigmatic figures whom we’ll get to know more of later. An off-screen president (voiced by no less than Breaking Bad‘s Bryan Cranston) fatefully coughs his way through the best reassuring address he can manage and likely does more in  one minute of running-time than his real-life counterpart did in a year.  Equal screen heavyweight J K Simmons is the remorseful military General who has to explain the Armageddon-scale of events to our ‘hero’.  Ezra Miller (The Flash / Justice League) Greg Kinnear and Amber Heard will also appear later.

The younger and more central members of the ensemble include James Marsden (X-Men) as Stu Redman (essayed by Gary Sinese in the 1994 mini-series), the ‘Average Joe’ who has the bad luck of encountering a serviceman who’s infected and then the good/mixed luck to find out that for some reason he’s immune to the virus that’s killing millions by the day. He’s fine but so far there’s been no heavy-lifting for him to do and he doesn’t grab the attention so much as react to the infodump.  Owen Teague as the unstable Harold Lauder (Corin Nemec played him in 1994) and Odessa Young as Frannie Goldsmith (Molly Ringwald in the original) perhaps fair better with the material than their counterparts or fellow cast-members because they are so much the focus. Things will change and develop in the weeks to come, but they’re the people who have our attention as we set out.

This latest version of The Stand differs from the more chronological book in its structure. The jumping backwards and forwards during the first episode can prove confusing, the links between the characters not always clear: we see them before, during and after the first days of the viral apocalypse (not always in that order) and though that sleight of hand can work and keep the audience on their toes as they reassess what’s going on, it can also frustrate. There are several ‘when are we now?’ moments before we see how the characters converge and even then it’s clear there’s a lot of space to fill. The tone is invariably King throughout – the story familiar for those old enough to remember the original adaptation but with the solid remit to always place ordinary people in extraordinary situations and test their morality and resolve.

An oddly nostalgic and retrospective result (at least in format and presentation) for something that had the opportunity and talent to truly be a thriller for our time, it’s hard to know the strengths and weaknesses that this new nine-part mini-series will demonstrate over-all. (We have, after-all, had more than our share of on-screen post-apocalypses). The production budget is obviously plentiful, but in ‘going large’, it lacks sheer, tighter tensions of another recent King adaptation The Outsider, which is a shame. The pilot suggests enough potential with the likelihood audiences will keep watching, but not enough unique must-see drawing power in an ever competitive screen landscape to mark it as something truly special. 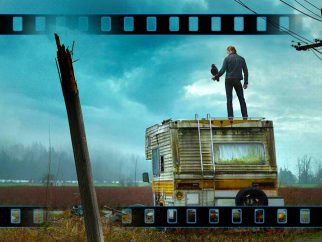