It's not a wonderful life for Georgiou as she goes through the keyhole and a Mirror Darkly...

Georgiou finds herself second-guessing her reactions now that she appears to be back at a key moment in her reign within the Mirror Universe reality.  Given her experiences in the ‘Prime’ universe since crossing over, she’s got a unique perspective that hasn’t softened her so much as made her value other things. Having had to kill her version of Michael before, she is determined to avoid that scenario again, but with treachery at almost every turn, her foreknowledge of original events will not help her for long.

With her chances of survival slipping by the moment, it seems more than just the fate of the Terran Empire is at stake but will it take Forever to see what must be done?

Much like the preceding episode, your enjoyment of Terra Firma: Part Two will likely depend on a number of factors: nostalgia, pragmatism and pantomime.

Firstly, the established, abstract opening credits receive a stylistic and smart twist, with the colour-scheme reversed from yellows to blues and turned upside down to reflect the Mirror Universe setting… which promises some real thought and design going in to the experience. The problem here, at least for this reviewer, is that it never feels like a story of real consequence beyond the running-time. Yes, any episode that gives Yeoh a chance to indulge in physical and verbal combat is always worth the price of admission… and yes, it’s a way to write her out of the show – something that’s likely been on the cards given that she is to headline her own Section 31 spin-off (one that we expected would likely require her to be whisked back to the 24th century from her current 32nd landscape by one means or another). But the execution feels somewhat self-indulgent… a grandiose but filler episode cos-playing as a more significant one by name-checking classics.

The Mirror Universe episodes are always a mixed-bag, too often a chance for the regular cast to magically be transported to pantomime-villain world and then chew the scenery with unapologetic glee. At heart all alt-history concepts are potentially interesting ideas, but this is one that’s rather been mined to death in formulaic execution over the years for exactly that reason – alternative versions of the characters conveniently still in the same orbits as each other complete with sneers, beards and darker lighting settings. The result here is less Game of Thrones and more daytime novella brushstrokes.  But even going with the flow, we see events that contradict some of what we’ve already seen regarding MU continuity in early episodes of Discovery – such as  variants of the season regulars being killed off earlier than we’ve seen them before – so, as such, they don’t pack an emotional wallop and point to it not being real (or real enough). Once you realise that the events won’t have further consequence, they lack the ‘all bets are off‘ shock and drama.

Every scene in the MU seems more scripted with snark than organically organised, designed only to drive us to the next obligatory scene and plot needs, rather than naturally evolve to fit. Lorca (Jason Isaacs) continues to get mentioned time and time again, to the extent that it feels he was meant to be in the outing but then had to be written around or edited out, which doesn’t help. The potentially volatile and textured relationship between Georgiou and MU-Michael is one that could be interesting to explore, so it’s surprising that it plays to all the expected beats and nothing more. Sonequa Martin-Green gives her best crazy-eyes performance as the alternative Michael but her sudden (and clearly fake-out) repentance halfway through the episode is one of a list of ‘Really?‘ moments that might apparently convince other characters, but not the audience. Though Yeoh’s Georgiou is full of internal conflict, it’s mostly talked about more than demonstrated… with the Empress musing in private and vacillating in front of her court until the climax. It’s all ‘Mirror Universe as therapy session’ by the time we’re done.

As mentioned in last week’s review, the fact that Georgiou has gone from villainous despot of galactic proportions to snarky comic-relief to a character that receives a moist-eyed tribute in a pseudo-wake from a crew that talk of respecting, liking and even loving her, never feels a good fit.  While Yeoh is always fun and more than capable, she hasn’t been used that well recently – her story largely taking a back-seat to the more prominent story-arcs at work this season, and so this partial-conversion of character and the subsequent outpouring of a tsunami of emotion from everyone never hits the right tone. While there’s an acknowledgement that she ‘had her faults‘  (well, genocide, anyone???) , here isn’t one voice saying ‘Are you all crazy, she was a sociopath who until a few episodes ago would sacrificed everyone except Michael in a heartbeat – good riddance!‘

We do learn the identity of ‘Carl’, the ‘doorman’ we met last week, but the fact that Georgiou has been deemed cosmically worthy of a third chance seems convenient rather than believable The use of the Guardian of Forever (first witnessed in the all-time classic time-travelling episode of the original Trek,  City on the Edge of Forever) is yet another dip into the franchise mythology but though it’s fun as a reference point, the use of  Paul Guilfoyle) as its frontman (another tropey omnipotent figure who ‘makes things happen’ ™ but without any of the quirky ‘Q’ like over-confidence) seems out-of-kilter with the toe. And despite many of the welcome Easter-eggs that have featured this season,  the infamous time-travel gateway merely assuming the role of hand-wavery maguffin in the right place at the right time, feels like over-kill as an arc solution- a production equivalent of getting an A-List veteran to play a walk-on cameo.

By its end, it’s all just a contractual diversion, something of a frustrating distraction from investigating the ‘Burn’ (with minor plot-developments ahead of next week) and a strange detour in a series that was starting to pick up the pace nicely. That’s not to say it’s not fun, this season has over-all been a marked improvement, but it doesn’t feel anything more than well-executed familiarity.

It’s sad to see Yeoh go, but hopefully the last few episodes of the run will see some answers to the main questions and central thrust of the season. 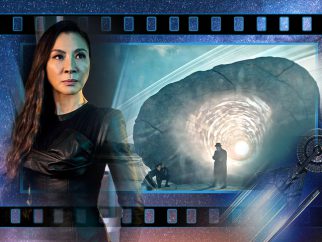