There's some tough choices to be made as our rag-tag heroes look to infiltrate an enemy base...

If Mando/Din Djarin has any hope of locating The Child/Grogu then he’s going to need a lot of help. He already has Bobba Fett and Fennec Shand helping him aboard Slave 1, but Cara Dune and her latest role within the New Republic may have the answer…. though it will involve getting an old foe out of jail.

That’s the easy part… breaking in to a secure Imperial facility that’s also being attacked by pirates is more difficult… and when then faced with a piece of tech that could test  Mandalorian vows, just what fateful and deadly choices will be made?

There’s a moment in the latest episode where  Bill Burr’s rough-and-ready Mayfeld becomes the viewer’s voice, asking the questions that even the most loyal acolyte has likely shouted at one point or another. Is Mando’s vow never to show his face OR never to take off his helmet because, as he notes “There’s a difference…“. And there is, but it’s still a bit of a surprise after plenty of deflections and contrived situations when it’s artfully (and somewhat unlikely) avoided, Pedro Pascal’s face makes an actual, if reluctant, appearance this week (in which case, one wonders if The Believer chapter title is a sly reference to the classic Monkees track as well?). At least on this occasion it’s a valid scenario (unlike the weird, arbitrary reveal last season) when he has to access a terminal with facial recognition that doesn’t like his face-coverings. Yes, there are narrative ways that could have been thrown in to work around or and obfuscate instead – why would the computer even have a record if our hero’s real face? – but it strikes that important ‘difference’ between what Mando is prepared to do to get the mission done and what he prefers. Otherwise, it’s a series contrivance rather than a code of conduct.

And this week, Mando is finally more at the forefront (though this is still Burr’s episode) as Morrison (as Bobba Fett), Carano (as Cara Dune) and Ming Na Wen (as Fennec Shand) essentially take a back-up position to offer covering fire. Given the reality of production efforts meaning it’s not even Pedro Pascal beneath the Mandalorian armour (not that we’d know), it’s good when we do see the actor and when there’s a good reason for it. There’s a weight put on the character’s shoulders when he sans-helmet and that could be something worth exploring because so much takes place in the present, it would be good to explore more of that baggage that Mando/Din Djarin carries. (The fact we forget that real name because it’s referenced so little, indicates the same). Burr, a comedian as well as an actor, was something of a comic-relief heavy in his first appearance in Season 1’s The Prisoner but is given much more nuance this time – still a wise-cracking mercenary with his own interests at heart, but a man deeply affected by the way the Empire treated him and his fellow soldiers during his tenure in their forces. That he sees and decides to shoot the condescending commander, Valin Hess (Welsh actor Richard Brake) who sent him to almost certain death those years before… and to do so in the middle of the busy Imperial base, might be a strategically stupid move given the sneaky approach Mayfeld and Mando are supposed to be undertaking, yet it’s played-out well and as an understandable PTSD reaction to a ‘higher-up’ who has long deserved the fate to which he sent others. Given that Mayfeld ultimately sees Mando’s real face, the audience suspects that the supporting character probably won’t make it out alive, but the fact he does is a promising sign we’ll see more of him at some point.

For all the fact that this sees a proper ensemble of actors sharing screen-time like a Wild Bunch, is this the first episode since his debut without a single Baby Yoda/Grogu scene? The diminutive Force-infant is totally absent, a prisoner of the nefarious Moff Gideon (Giancarlo Esposito) who himself only gets glimpsed in the epilogue, though this feels like a set-up for the finale. And, let’s be honest, cute though the kidnapped munchkin is, the episode really doesn’t suffer from his absence.

Rick Famuyiwa directed and wrote the episode and it has a slightly different but suitable beat to it. The transport battle scene is straight out of the stage-coach robberies of old westerns, with lasers, bombs and speeding anti-grav craft replacing horses and bullets and though it’s a clearly-designated and lengthy ‘set-piece’, it’s all choreographed well adds the action-element to proceedings.  Our heroes’ escape is also well-paced and the balance between the ground-assaults and the battles in the sky work well. One could argue that the episode is technically another filler chapter, but much of The Mandalorian‘s second season has been a string of such connective tissue and in/convenient quest delays and if a ‘filler’ can mange this level of VFX, character moments and just good old fashioned derring-so, it’ll do nicely.

It’s likely that next week’s season two finale will bring a lot of the characters together for something fairly epic, even by the show’s standards… with a third season already confirmed for the end of 2021… and thus far it’s been a visually-stunning and interesting (if not always well-paced) outing. 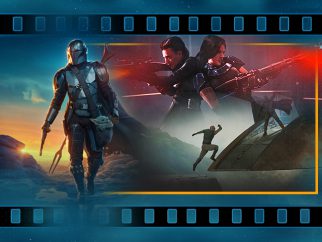