The Michelle Yeoh-centric episode is fun to get lost in - but makes little sense so far...

As Philippa Georgiou’s condition worsens, a restricted, archived file may hold some explanations, but it’s the Discovery’s own, evolving computer-system that throws up the slightest of chances of a cure. Georgiou herself would rather go out fighting than felled by an enemy she can’t hit or insult, but Michael convinces her to seize any opportunity she can to survive what is literally tearing her apart.

But on a planet on the edge of a very specific forever, there’s a man and a door that could hold that key – but when Georgiou steps through, she finds herself reliving a point in time in which she no longer feels comfortable. is this the real past or a test – and either way, will she live long enough to find a cure but only fall foul of treachery?

Terra Firma (Part One) is one of those episodes that has some welcome character-opportunities but doesn’t make a lick of sense – the kind of installment that’s simply a means to an end, an entry that’s about the high concept or hook and then everything has to fall vaguely in line to make it happen – so when the premise is that a possibly sentient computer tells a person to go to a mysterious planet where they are told to step through a magic wooden door on a glacier  and find themselves (possibly) in the past… well, you don’t really get to join the dots so much as go with the flow.

Though there’s lip-service to the season-arc story of the Burn (and decoding more of the mysterious distress-call at its heart) and the incoming menace of the Emerald Chain, those elements are largely put on hold for Georgiou’s mission to find a possible, if not probable cure for the condition that’s tugging her atomic structure in various directions through time and space and killing her in the process.

Anything that gives nuance to an interesting character like Phillipa Georgiou is great. Once again Yeoh has great fun with both the physical demands and the acidic humour of the piece, coming across as someone who’s not so much indifferent to her fate as just pissed off to the extent it inconveniences her schedule. There’s some nice swordplay and wordplay, but if this is the character’s series-swansong  (and that’s possible, as it’s screams exit-strategy ahead of her own spin-off) it seems familiar and some of the other character reactions don’t ring true. The series often downplays the fact that this version of Philippa Georgiou is the Mirror Image-shifted duplicate who once ruled over the galaxy and murdered people en masse for both pleasure and power. Yes, there’s token reminders each week of the difference – with plenty of snark and arched eyebrows – but the sheer scale of her innate ‘big-badness’ seems to have dissipated over time making her more Lost in Space‘s self-serving Dr. Smith than a despot who makes Thanos look positively cuddly.  Some of that is because…  if you want to keep such a character around you still have to like aspects of her rather than just despise her. Essentially: the audience may relish her delicious brand of survival-instinct from a distance, but the crew really shouldn’t thaw as quickly, merely tolerate. So, while Saru might be being acceptably pragmatic admitting he’s learned some things from her during her time on Discovery, the act of Tilly giving Georgiou a hug just doesn’t work on any level except as an awkward, inappropriate visual gag for Georgiou’s obvious discomfort.

From Georgiou’s journey through the mysterious door onward, the episode seems to be a fairly familiar (if inexplicably smooth) trip to the Mirror Universe where everyone simply plays a pantomime-level, vanilla-BDSM shade of despicable and chews the scenery accordingly (Sonequa Martin-Green really goes to town with murderous glares and some of the supporting cast play it to the hilt). Clearly the script wants us to see Georgiou has changed from the despot she once was in this time/universe, which she inevitably has (or at least done what’s needed to thrive), but we’re still back to the ‘cake and eat it‘ scenario where Yeoh’s character actively appears to be faking the sheer ruthlessness we love about her.  Her Prime Universe experiences have given a better range of options than ‘torture now, ask questions later‘ but she usually seems no less potentially dangerous.  And Terra Firma all feels, well, like pretty safe ground – but for a show that’s used profanity and blood violence on occasions for shock effect, this  – ironically – doesn’t feel as edgy as it could in the moment, even with a familiar character’s counterpart being murdered on-stage by Georgiou in self-defense. There’s also a Yorca-size hole in proceedings – with Jason Issacs’ character referenced so many times without an appearance that it seems counter-productive when he doesn’t appear). 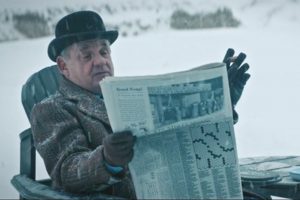 Veteran actor Paul Guilfoyle’s turn as Carl, ‘the doorman’ is quirky but abstract enough in its riddle-me-this presentation to be distracting. Hopefully who or what he is will be better explained in the second part of the story, but it will be frustrating if not… (Was that very  ‘City on the Edge of Forever‘ formatted newspaper just an easter-egg nod or something more relevant… and there’s a moment when one wonders if he could be a version of  ‘Q’?). David Cronenberg makes a welcome return, but this time there’s no real verbal sparring and it’s little more than an info-dump with the exception of his anecdote about a patient suffering similar dimension/time distress that pays in-canon homage to the split between the prime timeline and the ‘Kelvin’ continuity of J J Abrams alt-history’ feature films.

It’s all watchable, but despite potentially reaching out across the franchise for references, it feels like it’s an overtly orchestrated story with a lot of hand-waving of details and contradictions  to achieve a pre-designated aim –  so it will be next week’s resolution (coming on a fairly arbitrary cut-off point this week) that decides whether the pay-off and the journey combine to a fulfilling experience. 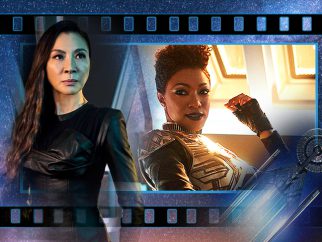