It's no big surprise, but the pay-off to previous teases about a familiar face/helmet, finally arrives...

Mando heads for the ancient temple to which Ahsoka Tano directed him, but it turns out he’s not the only one en route. The Empire is using the tracking device hidden on his ship to pinpoint his location and they see their chance to seize ‘The Child’ while he communes with the Force.

But there’s also two others who have a vested interest in catching up with the bounty hunter – both with impressive reputations and complicated histories…but will they kill him or help him?

There’s little doubt that The Mandalorian is a mission statement for Lucasfilm – a showcase for great special-effects, epic canvasses, no-expense-spared production values and an archive-embracing reward for Star Wars enthusiasts, particularly the long-term variety. On many levels it’s impossible to criticise and each week does indeed keep the audience coming back for more – the ultimate test of any show. But for this reviewer, it’s that showcase aspect that sometimes keeps a potentially epic show from becoming so. A celebration of the connective tissue of the Star Wars canon and mythology is exactly that, relying just a little too much on the Easter-eggs and recognition of franchise touchstones than something new and powerful in its own right.

But it’s all deftly-handled by legendary helmer Robert Rodriguez who came on board at the last minute when the originally-intended director couldn’t do it. The appearance of the unmasked Temuera Morrison as Bobba Fett is, of course, a big selling-point. Despite the character being little more than a supporting role in The Empire Strikes Back and Return of the Jedi – and being disposed of accordingly in a Sarlacc pit in the latter film, the bounty-hunter somehow became an iconic, cult figure in the franchise and the glimpse of Morrison on Tatooine earlier this season seemed to all but confirm fan theories of his unlikely revival. The Tragedy formally confirms his ‘resurrection’ as he comes back to claim the armour that Mando is carrying with him. Morrison cuts an imposing figure, even sans helmet, and seems to be a more proficient fighter than Mando. It also helps that Ming Na-Wen as Fennec Shand (left for dead in The Gunslinger) has also been recruited by Fett and is on hand to provide support when things get tough. That being said, in what is becoming a repeated observation, Mando himself is often somewhat less interesting than his supporting cast. As of right now, I’d pay decent money to see a Rosario Dawson-led Ahsoka Tano standalone show and a Morrison/Fett and Na-Wen/Shand show would also have its appeal based on this week’s outing… but The Mandalorian as character and show feels caught in a self-congratulatory if easy-on-the-eye loop, a two-hour film plot stretched to five times the length by rinse-and-repeat quest delays.

Grogu / Baby Yoda has his appointed moments of wide-eyed cuteness, but once again conveniently sidelined during firefights while he communes with the Force atop of a rocky, mountaintop temple before being kidnapped. While he’s the pivot around which much of The Mandalorian‘s narrative turns, he’s now in danger of becoming the maguffin – the reason why everything’s happening but far too often a bystander. It’s also a little unclear about his power-set, sometimes shown as a cooing baby with a mischevious nature and a dodgy appetite and in others as a slightly older (if shorter) apprentice who didn’t finish his full training.

The episode is called The Tragedy, which is an odd title hinting at something mortally devastating. Yes, the abduction of Gorgu is a big dramatic point, but, let’s be honest, it’s unlikely he’s going to die. The only on-screen deaths are the collateral damage of contractually destined-to-die stormtroopers, our heroes take a few hits but are able to walk away. And while the explosive destruction of the Razor’s Edge (Mando’s ship) is an unexpected shock, it comes in the wake of the ship getting so much damage in recent weeks that it not falling to pieces on its own was perhaps the bigger surprise… so that’s not really ‘tragic’ either.

Still, The Mandalorian is as shiny and nostalgic as ever – still not quite reaching its potential, but certainly a landscape full of geek eye-candy of the highest caliber. 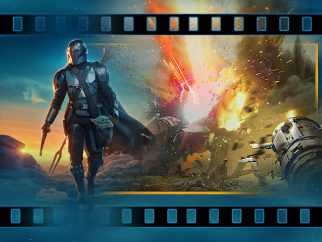