The recreation of The Clone Wars' Ahsoka Tano is a highlight of 'The Jedi', a stylish and myth-heavy episode...

Finally having the co-ordinates to which he can deliver The Child, Mando finds a walled town under the iron-clad hold of a Magistrate and her army…. and outside the walls a determined Jedi biding her time. Magistrate Morgan Elspeth promises the Mandalorian a spear of pure Bespar if he will rid her of her turbulent adversary and, knowing it’s his quickest way to locate the Jedi he needs, Mando pretends to accept.

Narrowly escaping the power of a pair of lightsabers and their owner, Mando meets the Jedi in question, Ahsoka Tano (guest-star Rosario Dawson) and she helps unearths details of The Child’s history. But with the presence of the dark forces in the walled town ever more dangerous, Mando and Ahsoka team-up to end their tyranny.

But will it be that simple?

There’s no doubt that Ahsoka Tano’s appearance in the show, the first time the character (who debuted in the animated The Clone Wars) has been given the live-action treatment, is almost perfectly-pitched, gloriously inhabited and a joy to behold. Rosario Dawson – whose participation was one of the worst-kept secrets in television – inhabits the role seamlessly, though with enough decorations and wardrobe recreations that she is not distractingly recognisable as some guest-roles are wont to be. The face, form and look are fantastic and the choreography that goes into her lightsaber-wielding combat is as good as anything you’ve seen on the big screen.

The direction by Dave Filoni and the combined talents of the make-up, production design and editing departments creates genuine atmosphere and magic for arguably the series’ most myth-heavy entry and the subdued lighting in some mist-heavy scenes makes the swirling cinematic light-sabers as picturesque as they are deadly.

The fact that The Mandalorian has western and eastern touchstones and homages has never been more obvious in the way that the episode cuts between the samurai-adjacent graceful battle between Ahsoka and Magistrate Morgan Elspeth (inside) and a down-and-dusty saloon-adjacent stand-off between Mando and Commander Lang (outside).  Diana Lee Inosanto is, of course, a legend in her own right – the daughter of martial arts legend, Dan and his wife Sue Inosanto and the god-daughter of Bruce Lee – and it’s clear to see her skill in every movement, not a moment of her on-screen combat wasted. On the other hand screen-veteran Michael Biehn’s participation is a little less in-your-face, through no fault of his own. There’s still his undeniable screen-presence and a grizzled, tired gravitas he brings to the guest-starring role, but he’s not given anywhere near enough to do before meeting his fate. He could have been a great recurring presence, but it was not to be. (However the audience gets a wry smile when he watches the armour-gleaming Mando stride up the main street in a way that can’t help bring memories of The Terminator to the fore as well as the duel in Tombstone).

What would normally be the BIGGEST news is that The Child/ Baby Yoda actually has a definitive name… Grogu (the screeching sound you here is the rebranding of the merchandise being created just a little too late for Christmas). But though it’s an interesting scene, beginning with Ahsoka’s almost unspoken conversation, the revelation actually feels a little unnecessary, even a bit underwhelming, as it’s unlikely the viewing public is suddenly going to switch what they call the diminutive force-wielder whether they like that moniker or not. But the bigger question is, where does this leave Mando and his charge? Yet again, there’s a create-you-own-quest feel with a ‘Roll six to receive new information about where to take The Child‘ motif in which we’re now heading for an almost biblical mountain-top climax towards the end of the current run. Yes, a lot of Baby Y….Grogu’s backstory is starting to get filled in, but in the meantime, will things simply continue as before… for all intents and purposes, despite revelations galore, very little has actually altered the status-quo, just deferred it a little further. (Though story-wise, there’s a nice reversal of fortune in the sense that the scenes of Ahsoka attempting to train Grogu will remind viewers of Yoda teaching Luke on Dagobah and his similar fumbles and stubbornness… and those who know of Ahsoka’s trials and tribulations in The Clone Wars will know exactly why she’s wary of taking on an apprentice who could be unworthy)

It’s also worth pointing out that not for the first time, Mando feels like a supporting role in his own series, the screen-time devoted to prominent guest-stars. He gets better use than last week, but Ahsoka is SO the focus of proceedings that it’s likely fans old and new would have been happy to see it as a formally planted-pilot for her own live-action show (which, frankly, would be far more interesting that Gina Carano / Cara Dune spin-off that was briefly suggested). Mando is, for all intents and purposes, a deliberately stoic archetype, literally stiff in delivery and execution, so it doesn’t help his cause when the enigmatic, more graceful supporting players steal the show.

Chapter 13: The Jedi is perhaps the most ‘Star Wars‘ episode of The Mandalorian to date and while it shows some of the fault-lines in the series, it also demonstrates just how good a show can be when it’s firing on all cylinders. 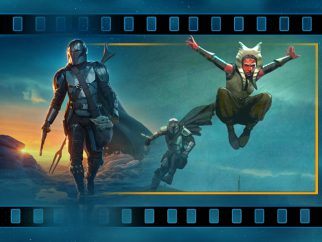