An emotional study in tolerance and empathy marks a turning point in tone for the new season...

Adira may have the information needed to locate what is left of the Federation but it appears her Trill memories from previous hosts are blocked. Realising they don’t have the technology to help, it’s decided the Discovery will take her back to the Trill homeworld to see if those vital memories can be unlocked once more. At first their arrival is met with optimism from both sides, but the highest-ranking officials of Trill realise that Adira is human rather than one of their own race and refuse help, taking matters into their own hands.

Meanwhile back on the ship, Saru is trying find ways to address the fraying nerves and tempers of the crew and receives a prompt from the ship’s  unusually jovial computer/Sphere interface, one that has decidely mixed results…

Devoid of any major battles, Forget Me Not is one of the those episodes that is character-based but actually manages to edge a whole variety of stories along, all of which have potentially interesting implications.

As we’ve previously noted, the franchise has always had an admirable track-record of inclusion and some of the best Trek episodes have spoken to tolerance and and the celebration of diversity. While last week’s episode introduced Blu del Barrio (an actor who identifies as non-binary) as Adira, this episode brings Ian Alexander (Trek‘s first trans-actor) as Gray, an important part of Adira’s forgotten past and a character who will also continue to feature in the series after this episode.  There will be some who think the addition of such characters/performers is merely some sort of political-correctness, an argument that frankly doesn’t hold much weight. However some shows have undeniably introduced characters in well-intentioned but sometimes clumsy and reactive, preachy ways rather than organically. Forget Me Not is an example of how to do it better – where the sexuality or labelling of gender/sexuality of the characters really isn’t as an important part of proceedings as the ‘relationship’ itself… and, indeed,  the ethereal feel of  visiting the Trill subconscious adds a suitable mixture of both symbiosis/otherness that could speak to the alienation (no pun intended) that some feel.

The ‘B’ story (though the split here is pretty equal) is a closer examination of the crew’s tensions… Doug Jones’ Saru attempting to find a way to help people deal with their feelings since being thrust away from their families and friends. It doesn’t seem to go well, but the intent at least forces the unspoken issues out into the open, if somewhat messily.  There have been some obvious hints that there might be something sinister or wrong with Detmer (Emily Coutts) after her injuries, but this episode suggests that it might simply be unspoken PTSD and if so that’s actually a welcome writing-development, the series avoiding the usual de facto sinister narratives  – but we’ll see. It’s also interesting that the ‘bridge crew’ scene gives a lot of the supporting players little moments to shine… starting to develop characters that are more than space-filling uniforms. It’s been a slow progression and you’d have been pushed to remember all their names, but hopefully there’s a real effort to enlarge the ensemble. The episode ends with what is largely a big crew-size group hug and a recognition of the fractures that exist between them now… which might be simplistic but works well enough for the moment

Echoing – or is that foreshadowing? – the acclaimed Short Trek episode Calypso, there’s also a brief moment where the voice of the Discovery‘s computer changes tone and attitude, voiced once again by the minisode’s returning Annabelle Wallis and also use of a massive holo-display in the hanger-deck. It’s nice that there appears to be some efforts to join various established ideas and asides into a cohesive whole, though hopefully these elements will find balance in their revelations, neither too drawn-out nor  too rushed (we want to know how Calypso‘s events came about, but there’s plenty to do first)

Tonally, this feels like a mixture of older Trek outings infused with the new – and that’s some acheivement. It’s an ‘alien-culture story of the week’ in many ways with pacing that feels like the original series and subject-matter with an obvious link to Deep Space Nine. The CGI budget is spent on Avatar-like environments rather than space-battles with a result that works pretty well, even if the Trill experience’ logistics are a bit hand-wavery in explanation (a mixture of birthing pools, sensory deprivation etc).

If this is the standard of episode we can expect in Discovery‘s ongoing mission, there’s a feeling it may have found its footing and balance at last… not so much pushing borders but establishing a confidence it’s also earning along the way. 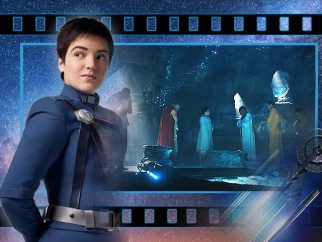