Michael Connelly's 'Lincoln Lawyer' finds himself in trouble when he's framed for murder... but how and why?

Attorney Mickey Haller has just won another case and is in the mood to celebrate. But on the way home from a subsequent party, he is pulled over by the police in what he presumes is an annoying but arbitrary event – after all, he wasn’t speeding and he’s now tee-total.

Unfortunately, an inspection of his vehicle reveals that everything is not in order: there’s a body in his trunk.

Initially held without even the chance of bail, things go from bad to worse when it turns out that Haller knows the victim (and is owed money by them) and that there’s growing ballistic evidence that the body has previously been in Haller’s garage. Faced with a prosecutor who is determined to see Haller convicted at all costs, Haller has to rely on his close company of family, friends and associates to do a lot of his legwork as he decides whether to defend himself in the most important courtroom appearance he’s faced to date.

A Michael Connelly book is always an event and though we’re getting spoiled with two-a-year releases in recent times, everyone of them is a page-turner from an author who knows the topography of crime from a variety of angles. Here we’re back with Mickey Haller, the Lincoln Lawyer himself and, as expected, that leads to some interesting and compromising developments.

The twists and turns along the way, including the various opportunistic tricks of the trade demonstrated by both defense and prosecution, keep the attention throughout and Connelly masterfully walks that line,  making us cheer for Haller even when he’s duplicitous and boo his opponent’s prosecution tactics when she resorts to the same. Connelly, as always, understands the strength of the tale is in those shifting power-plays and there’s no doubt we’re thoroughly invested in the ‘Lincoln Lawyer’ and his fate. But Haller has always been one of the author’s more ambiguous characters. While Bosch has changed over the years, he’s essentially still the guy who’s a straight arrow, even when bending the rules ever so slightly when justice needs to be served. Though Haller has his own ‘code’, he has never had quite that same moral compass and that allows Connelly to present a more cynical view of the justice system – one built on opportunism and Haller’s  importance of winning at all costs.

Giving a solid sense of place and time, Connelly works in aspects of both the early days of COVID and the start of the US election campaign into the fringes of the story, not an easy task when the book was largely being written in the midst of 2020’s serpentine chaos rather than from a little distance off. It’s largely successful, the suggestion of an oncoming storm that acts as an outlier and enclosing frame to the main events, but one of foreboding given the reader knows a little more than the characters with regard to that world-building. There are still so many unknowns that it’s almost refreshing to hear a perspective from the time when ignorance was bliss – and in what now feels like a cultural eon ago.

Connelly’s tomes are always a superb read and there’s no hesitation in recommending yet another bestseller in the making. However, that’s not to say that The Law of Innocence is perfect. Anyone initially excited by the inclusion of Harry Bosch in proceedings may then be a little disappointed with what feels like a few contractual cameos (needed because of his fraternal connection to Haller). It’s a handful of scenes which could easily have been handled by an another character . However a range of faces and names familiar to long-time fans do reappear and make themselves welcome.

Connelly, as ever, shows expertise in the chronicling of the way the justice system works (or is supposed to), to the same, impressive degree he knows police procedures for his Bosch outings. That being said, good mysteries and courtroom dramas work best when they answer the three essential questions: how something was done, why it was done and by whom.  But without giving away specifics – even the most loyal reader may be left with some frustrations  here – not with the quality of the writing, but the framework itself. The start of the book plunges the reader straight into the central dilemma – the discovery of the body in Haller’s trunk –  even before the first chapter is done.  After the bulk of the novel then deals with intriguing, tightly-plotted legal back-and-forth, then the ending comes just as quick for a bookender. (Something a reader might anticipate when they suddenly realise they’re less than twenty pages, including an epilogue, from the end). Ultimately, some in-story responsibility is accounted for, some sleight of hands acknowledged – but there remain a few dots that aren’t joined quite as neatly – addressed with a shrug and essentially to be addressed off-camera.

The book stresses time and time again that people are not found ‘innocent’ merely ‘not guilty’ and in making the book’s moral centre and Haller’s  journey the innate determination to clear himself utterly and absolutely (rather than merely create a mistrial) it then barrels towards an ending that doesn’t quite provide that specific, public absolution, the resolution almost a side-consequence of ‘important things happening off-camera’. It does ultimately feel like Connelly’s otherwise incisor-precise focus suddenly shifts to a bigger and far more vague canvas, tying things off but denying Haller and us that satisfying and climactic  ‘Gotcha!‘ moment we’ve wanted since the start. In many ways it’s a judgement deferred and it would be nice if those elements found themselves surfacing again in a later tome.

Niggles aside, The Law of Innocence published by Orion in the UK this week, remains a strong, superior and accessible read and yet another entry ready to take its place on the bookshelf of any discerning thriller fan and Connelly devotee. 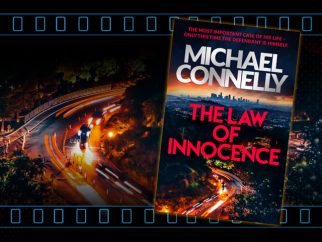 Be Patient: Doctor Who’s 2021 run now down to eight episodes…