'People of Earth' sees the Discovery head back to Earth, but there's been some changes over the centuries...

The Discovery and Michael are reunited, though for the crew its been hours and for Michael almost a year. Comparing notes and their known unknowns, the decision is made to head back to Earth and see how the home of the Federation has fared – and Book will come along for the ride, an opportunity to go boldy far further afield than has been possible before.

But on arrival at Earth, they are greeted by an orbital defense network and a response that’s far from welcoming. It seems that the people of earth have turned inward, defending their resources of the rare Dilithium from raiders and assuming any visitor has hostile intent. Though the Discovery hides it’s time-displaced status, one of the Earth visitors, a young scientist named Adira quickly begins to suspect that something is amiss. When the ship is attacked by raiders, life or death  decisions have to be made quickly, but with their time apart Saru and Michael have very different ways to handle the crisis…

The moment that Michael and the Discovery crew meet up again was always going to be an emotional one and it plays out pretty much as you’d suspect with great happiness for all of them but a sense of awkwardness thrown in. (And I’ll say once again that while I think that Sonequa Martin-Green is a perfectly good actress, the writing for her character doesn’t always serve her well. Once again, the hallmark of her story is grand speeches, impulsive decisions and teary-eyed emotions that would work far better in moderation than they do in a weekly bullet-point delivery).

Remembering the welcome Voyager got on (spoiler?) its return home, the Discovery’s arrival back to Earth is very different for obvious story reasons, but it’s all very subdued even when things are sorted out. With most of the action taking place in orbit, we get one long-shot of what was originally Star Fleet headquarters and the rest is a generic park/garden (including a literal tree-hugging moment) which just seems a little anti-climactic before the Discovery heads off again. While one might have presumed the return to Earth would have been the season’s climax, it’s actually quickly dispensed with as a footnote. With a big ‘whoops!’ we’re moving on and a ‘well, that’s sorted, where next?‘ scenario by episode’s end. The basic story idea that Earth and their Titan colony would largely have been at war because of a misunderstanding that escalated after a major event like ‘the Burn’ feels very much like the kind of conceit that would work in the earliest days of the Trek franchise and with far-flung planets, but again feels less likely within the tone and narrative of the modern Trek mythos.

There are moments the script also feels heavy-handed. On one hand Saru tells Michael that the crew are finding different ways to adjust to their new displaced predicament (when the pacing would suggest they’re having that conversation only a short time after the previous episode and therefore technically within hours of arrival, so likely enough they would barely have caught a breath) and on the other hand, Michael and Book discuss their shared experiences and disagree over the details when Michael’s only been there a year. The result is that it feels less like organic conversation and more like a script-notes to hammer home the differences in their personal timelines. It’s a plot-point one suspects will be recurring, the idea that Michael’s been changed by not being part of a ‘crew’ for a period of time and now reacts instinctively rather than as part of a command-structure. That being said, from her very first appearance, Burnham has been something of a loose-cannon so this feels more like giving her a ‘legitimate’ reason rather than a huge change to her personality. It’s one that Saru saliently points out could be a major problem, though to his credit, he’s willing to work with her on that if she’ll meet him halfway.

Trek has always been an inclusive and forward-thinking franchise. Still, much copy has been typed about the fact that Blu del Barrio is the first non-binary actor to be set as a regular character in Trek, though perhaps that importance is – in the best way – it’s lack of importance within the story where, so far, the character’s gender isn’t any kind of front-and-centre issue and we know very little. The more interesting aspect introduced is the reveal that Adira is also a host to a Trill (the symbiotic creatures that were a part of the Deep Space Nine mythos) and who have the potential to experience many lifetimes through taking different hosts. Later in the season we’ll see trans-actor Ian Alexander in a central role as well It will be interesting to see where the season takes the characters and actor sand what opportunities are given and taken within the narrative.

This third episode feels like the final part of a scene-setting trilogy, officially installing Doug Jones’ Saru as captain and getting ready to take Discoveryon a new mission (to find out what really happened in the ‘Burn’ and the years they’ve missed). How Burnham’s much-repeated promise to find a way to undo the damage perhaps looks empty given their lack of time-travel technology left, but piecing together their options could still be interesting… 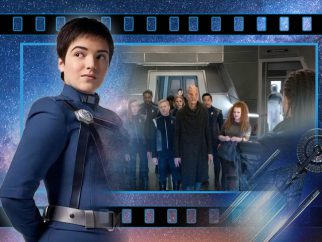