Delayed from the spring, the current season of 'The Walking Dead' finally reveals its finale...

Beta’s plan to wreak bloody revenge on the combined forces of Alexandria and the Hill-top seems to have worked, with the survivors seemingly trapped in the tower-block and thousands of the undead blocking any hope of a retreat. A plan is formulated but it is dangerous and requires nerves of steel. A small group attempt to work their way through the horde to start a distraction that will pull the undead away, but beta and his Whisperers may be ready for them. Others will have to decide where their loyalties lie at the tipping point of group survival and self-preservation……

Elsewhere, some old and familiar faces are slowly working their way towards the tower, but will they be in time to avert disaster and if Beta is to face his omega, what will be the cost?

The months long anticipation for the season finale episode – ominously entitled A Certain Doom – doesn’t entirely work in its favour. Yes, there’s tension galore and a serious threat, all well-executed with good performances, but in the months of waiting, there’s been an almost mythical, epic feeling as to what to expect and the actual result is more realistic: a competent season ender with plenty of character beats rather than some major milestone. You also have to be reminded of where everyone is and why.  Jeffrey Dean Morgan’s Negan looks as if he’s about to rabbit out on the team, though there’s some logic to the fact that he notes the Whisperers hate him so much being on the frontline could be an unneeded distraction. That fact plays out well when Negan in fact sticks around and uses that very fact to make the ‘distraction’ work to our heroes advantage, drawing Beta out from the midst of the horde to face him. Beta gets his deserved grizzly fate, but there’s still a dark humour in that Negan finally recognises his nemesis’ ‘famous’ face under the mask.

There’s some making-peace scenes between Carol and Daryl as well as Carol and Lydia (Cassady McClincy), the kind where you think someone’s likely to end up dead post-heart-to-heart. There’s a moment – albeit a brief one – where you’re tempted to wonder whether AMC had pulled off a dazzling and audacious faux-marketing sleight of hand and despite announcing a Daryl and Carol spin-off for the franchise, it is – instead – about to dispatch Melissa McBride’s Carol to a tragic grave in a moment of self-sacrifice. Of course, you’re also likely to remember that this episode was shot and almost completed many months ago, delayed only by COVID affecting post-production, so if the bait-and-switch had been real it would have been a truly ruthless and sadistic piece of planning. No, worry not, Carol does survive her plan to lead the horde over the edge of a chasm – a scene that works better on its emotional level than in its logic… the zombies ultimately acting more like a hundred undead lemmings than the thousand-strong, mega-non-social-distancing threat they’d been all episode.

The return of Maggie Rhee is no real surprise as it’s been known that actor Lauren Cohan was coming back to the show (her caper comedy Whiskey Tango having been proven Delta O Alpha at CBS). But it’s a shame that we actually get a nod to this early on in a montage of scenes suggesting that some of the disparate members of the cast could be coming to the rescue.  If we hadn’t glimpsed her reading a note explaining how she was desperately needed, her sudden appearance in time to save Gabriel (Seth Gilliam) would have been far more impactful. There’s understandably no time ‘So what have you been up to?‘ for the reunion, but there’s also no real explanation how she made it past the horde and up in to the tower so easily (she seems remarkably clean, so she’s not been using the entrails).

Elsewhere Eugene (Josh McDermitt), Rosita (Christian Serratos), Ezekiel (Khary Payton) and ‘Princess’ (Paola Lázaro) provide the lighter banter as they continue their obstacle-strewn search for Eugene’s CB-radio paramour, Stephanie which leaves us on something of a storm-trooping cliffhanger…

For a season finale, there’s not that much notable death outside the walking variety: a few supporting characters who you’ll struggle to name and Beta himself, but otherwise all your favourites remain battered, bruised but still with a pulse… there’s even  the epilogue-return of Connie (Lauren Ridloff) last seen buried in the mine explosion and now looking likely to team up with another returning face Kevin Carroll’s Virgil (last seen in Michonne’s departing episode).

All in all, a decent finale for the current run and though we’re promised extra episodes in the year or so to come before The Walking Dead shuffles off permanently, fans will have to make the most of it…. 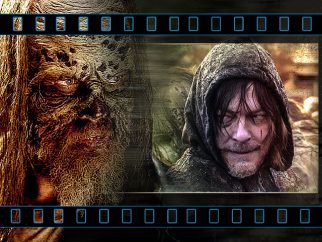