While the story itself is wanting, there's charm a'plenty in Netflix's Sherlockian twist...

When Eudoria Holmes (Helena Bonham Carter)  vanishes from the old Holmes estate it comes as a particularly devastating blow to the young Enola Holmes (Millie Bobby Brown) and perhaps less so to Sherlock (Henry Cavill) and Mycroft (Sam Clafin) who have always tolerated their mothers pro-active eccentricities from a distance. However the two Holmes brothers now return, wanting to make sure that their younger sibling is escorted off to become a ‘proper young lady’ rather than the rebel free-thinker their mother encouraged.

Enola is having none of it and believing she’s found a clue to her mother’s real intent, she escapes the family estate and heads to London. But long before she makes it to the bustling capital, she finds herself on train with a young man who is also on the run from a mysterious assassin. Enola is about to swap one mystery for another, one that could alter the history of the country forever…

There’s a lot of good, or at least entertaining things about Netflix‘ sassy Enola Holmes but amid the fun and frolics there also remains something ‘off’ that’ is, at first, hard to place.

It is, ultimately, the feeling that by the time you’ve got to the end of the film, you’ve enjoyed the performances but found the actual story wanting… because despite the talent involved and the undoubted charm that it displays along the way, the script and pacing feel more like a packed checklist and first-draft than the finished article.  The film’s main mystery, the disappearance of Enola’s mother (Helena Bonham Carter) ignites everything that comes afterwards – the ode to female-empowerment and family dysfunction seeing the young Enola scurrying off to London in search of answers and finding herself caught up in a conspiratorial caper. However the film simply doesn’t deliver on that initial concept. Distracted by the more rompish remit, the answers that finally come about Carter’s vanishing act really don’t warrant the set-up, offered up with almost an afterthought, anti-climactic shrug than a true Sherlockian flourish.  Carter is good as the missing matriarch  but is better in the brief flashback glimpses we see of her near the start, the enigma proving more enigmatic than the reality.

I hadn’t heard of the Young Adult books featuring Enola Holmes before the screen adaptation. She’s not a character from the Arthur Conan Doyle creation but a subsequent creation by Nancy Springer, the character appearing in a range of YA books that first appeared in 2006. The additions to the Holmes family-tree are not a new concept in and of themselves (William S. Baring-Gould’s novel Sherlock Holmes of Baker Street, suggested another older brother named Sherrinford and Steven Moffat’s contemporary series gave us a sister named Eurus)  but with this latest entry there’s definitely that outreach to a younger audience who will find much to enjoy in a decent romp.

Millie Bobbie Brown, having made her mark in the likes of “‘what goes around comes around…” Passengers and then cultural breakout hit Stranger Things, is an assured all-screens ingenue and carries most of the film on her shoulders. Characters breaking the fourth-wall need to be charismatic and she’s more than capable of that, though the to-camera-delivery is used more sparingly as the film continues, revealing it to be the ‘hook’ that it is rather than a necessity. However in both dialogue and action, Brown throws herself into it all with all the gusto needed for a potential franchise character -should it happen.  Henry Cavill is a Sherlock who spends more time being stoic than sleuthing, more often than not simply establishing himself as a sympathetic older brother (and, frankly, not really very ‘Sherlock Holmes’-ish except when the script gives him some abstract deductions to throw into his dialogue – the Springer books make him less sympathetic and that disparity has actually involved the Netflix version being sued by the Doyle estate). Peaky Blinders‘ Sam Clafin essays a distant and conceited Mycroft Holmes, more often than not there to be boo’d and prove an unwanted obstacle. Louis Partridge is a good-enough male-lead, a chaste love-interest and essentially the ‘damsel’ in distress of the enterprise.

Harry Bradbeer, a veteran director known more for his episodic television pedigree, produces an outing with visual flair and cheeky, winning style. The film might not be as good as the marketing build-up suggested, but as a diversion, it’s a solid family affair that should please all those gathered around the television in the wake of a cinema release… and on that level deserves to do well. 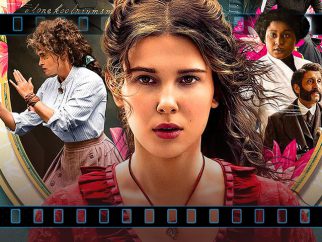