Bringing a whole new meaning to the term 'The Odd Couple', the Marvel Cinematic Universe is taking an abstract tv turn...

Many of the new wave of Marvel television shows are on hold because of the COVID pandemic – none of them currently having firm broadcast dates. The latest promotions for The Falcon and the Winter Soldier have now removed the originally intended ‘2020’ date, indicating it will most likely debut some time early next year. However Disney+ have also just released the longest, clearest trailer for the upcoming WandaVision series and saying it will be the first of their new shows to debut on Disney+… which might indicate that plans to have that on screen before the end of the year remain intact. 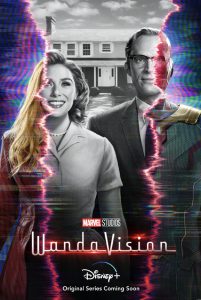 Though the structure of the show is still somewhat shrouded in mystery, we know – of course – that it centres on the characters of Paul Bettany’s Vision and Elisabeth Olsen’s Wanda Maximoff (aka Scarlet Witch). But wait… as viewers of the Avengers movies know, the real obstacle here is that the Vision was killed in the throwdown with Thanos, so how is he able to make a comeback?

The new trailer that appeared during the Emmy Awards on Sunday night doesn’t answer that question but amps up the abstract, virtual-reality that appears to have caught Wanda and the Vision in a succession of familiar-formatted television styles and environments…   We also know that it is, at least in part, inspired by the Marvel Comics stories that saw the couple, attempt to build an anonymous relationship in suburbia… naturally not without some hilarious and potentially tragic obstacles.