It's a case of the predestination prestidigitation as Nolan pays cold tributes to the 'Sator Square' relics...

A CIA agent (John David Washington) is part of a task-force sent to extract and asset during what appears to be a terrorist attack on a massive concert-hall. However he notices that certain events during the mission don’t… feel right. He’s ultimately captured and is faced with the decision of taking his own life to protect his mission secrets. But the next thing he knows he awakens to be told he is being recruited into an organisation with a far bigger remit. It appears that someone is using reverse entropy to create major problems, an alteration to the way a person perceives time and is perceived by others. It’s almost as if… the future is attacking the past.

Assigned to find out how it is happening and tracking those who might have insight, the agent makes his way through various arms-dealers who  have acquired strange new technology and receives the assistance of a British agent named Neil (Robert Pattinson) who seems to think that the real goal is to track missing plutonium. The trail leads to an oligarch named Andrei Sator  who lives by a maxim that if he can’t have something, he’ll stop anyone else having it.

But what if the prize is the future itself?

Movies, it is said, are made three times: once in the writing, second in the filming and third in the editing suite. Douglas Adams also  noted that ‘Time is an illusion, lunch-time doubly so…‘  If both observations are  true then Christopher Nolan’s career has been a sting of lunch-times spent in the editing suite – no more so than with Tenet, a film in which editing is almost literally time and space itself.

For audiences, Tenet was originally supposed to be the year’s biggest film and later, for the distributors and movie-theaters, it was supposed to be the post-COVID salvation of the industry… and though time and tide will tell, the initial feeling is that Christopher Nolan’s latest ode to scale will ultimately be neither. The shroud of secrecy that enveloped it for so long proved a double-edged sword, because it’s hard to fully anticipate something you don’t know more about… and even days before its limited and staggered release across the world the film wasn’t about to give up any of its secrets. A trailer that relied on interesting but abstract visuals yet gave nothing of the plot was all anyone had to go on.

So, when and if you see it, what will you think?

Tenet comes across as Stanley Kubrick’s James Bond or a Rashomon take on Time Cop, which on paper at least, sounds interesting but is a different experience on the screen. To borrow a viewpoint from Tenet, it’s like watching an inverted Michael Bay movie: technically all the boom and bust is there but while Bay slobbers over chrome and visible pantie lines, Nolan’s effort feels robbed of even a drop of libido or testosterone.  It’s a country-hopping spy-fi story with broad horizons that interweaves espionage and perceptions of time but despite an obvious look-at-me budget, it is one that consistently prioritises the considerable talk over the walk.  There’s fights and stunts along the way – exercises in micro-managed, hands-on choreography and scale that might make Tom Cruise baulk… ‘look we actually blew up a real plane!‘   but they are often presented as as separate or secondary, as if we were showcasing the VFX department, marking time before a antiseptic info-dumping table-reading, or delivering an dissertation on emotion that asks you to merely appreciate the font. There’s a dry, detached crispness to proceedings – something that’s hardly new for Nolan’s work. He is a creator with almost unrivalled ambition but whose creations focus more on scope and vision rather than an ounce of heart or warmth. But here it’s even more in the crosshairs,  a study in creating a landscape that can only be fully viewed from a little distance off but placing the viewer in the centre. A neat trick, to be sure, but one that is all prestige and little else.

The first half of the film is scattershot, veering between baffling and intriguing, so abstract in its presentation and the way it jumps between scenes that you might be inclined to wonder if it had even been finished before release.  The second half of the film becomes more interesting as we start to see some of the connective tissue that’s been missing so far – some events seen from other perspectives, but by that time there’s a fundamental difference between being interested in the outcome or invested in the journey. Time-travel, paradoxes and predestination are enough to give anyone temporal headaches and the mechanics of such are often open to debate. Tenet is a film built on them, discusses them at length and then sees fit to cast them aside when they prove too problematic. The future’s out to get us! We must avoid paradoxes! Avoid the kill-switch!  – all of which become redundant at some point or other. Yes, there’s some impressive stitching of the fabric and blueprinting of the conceits but in the end it’s really nothing we haven’t seen before – it’s like watching River Song and the Doctor counter-chronological capers with a bigger budget or Bill and Ted without a single laugh.

Cast-wise, it’s telling that everyone is defined by their actions rather than personalities. Even John David Washington’s central character in this is known simply  as ‘The Protagonist’, his name and role really the only thing we know about him and even as revelations come along later, he continues to be a character interesting only by his predicament, a chess piece that might be a pawn or a king. Robert Pattinson buddies up to help Washington for his own reasons but only threatens to get slightly more interesting as the film progresses. Kenneth Branagh plays the role of a dangerous Russian oligarch Andrei Sator well enough that you quickly learn to hate him, arrogant and coiled like a snake who has the trappings of a Bond villain but the resolve of a back-street brawler.  The exquisite high-brow beauty of  Elizabeth Debicki as his abused wife Kat gives the film its one glimmer of heart and real emotion and perhaps the only sympathetic character by the time the credits roll, but it also wastes that charisma by injecting no chemistry with anyone else. As a character she’s there as a plot-device, there to be adored from afar or potentially fridged for sake of story.  Supporting performances come from the likes of Michael Caine in a brief and mostly unimportant scene, Dimple Kapadia as Pria (the head of an arms-dealing empire and with some insight into the temporal threat), Clémence Poésy’s scientist (whose name is Barbara – though you’d be unlikely to remember it – and whose role is merely to give a five-minute information dump) and Kick-Ass/Avengers star Aaron Taylor-Johnson as a military commander… though by the time you recognise him you’ll also notice that he too remains nameless.

At nearly two and a half hours, Tenet is the most organised mess you’ll ever see on screen, clinically amazing and procedurally ponderous in equal measure, a house built to draw gasps of appreciation but never designed to be occupied. Yes, if you’re well-informed, it’s a wholesale tribute to the ‘Sator Square‘ relic with key elements name-checked throughout and the kind of film you may need to see twice to understand but simply may not want to. It may stretch your perceptions, but if you want a time-travel film that blows your mind in a far more satisfactory way, seek out 2014’s far more organic and expectation-defying Predestination – made with a fraction of the budget but with miles more originality.

‘Tenet‘ is now on limited release, depending on availability of screens in each territory. 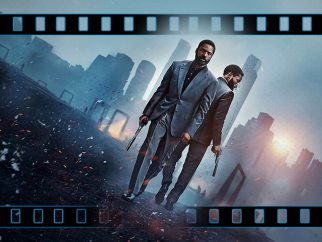