Something is tearing apart the reservation on which Dani Moonstar (Blu Hunt) and her father live and as things spin out of control, Dani awakens, days later, in a hospital – told that a hurricane wiped out her home and left her the only survivor for miles.

She’s also told by Dr. Reyes (Alice Braga) that it’s believed she is  mutant and that the facility she is now in will help her learn what her powers are and how to control them. Dani isn’t the only young person there. She meets Rahne Sinclair (Maisie Willians), Illyana Rasputin (Anya Taylor-Joy), Sam Guthrie (Charlie Heaton) and Robert Da Costa (Henry Zaga) who all have ‘gifts’ of their own and have been made the same promise by Reyes.  Perhaps, when they learn to embrace and control their disparate abilities they can move to another home – one they believe might be the home of the legendary X-Men.

But Dani continues to have nightmares and, soon after, the others also have visions that terrify them. As it becomes clear that the facility and its agenda might not be as altruistic as first believed, these ‘new mutants’ must work out if the greatest dangers and fears are caused by their ‘beautiful prison’ or from themselves… but to do that, they’ll have to work together…

You’d be forgiven that The New Mutants film had somehow invoked an ancient curse and was doomed to remain in an ironic limbo of its own, forever denied viewing by the outside world. The film was originally due for release back in 2017 and promoted with an eerie trailer accompanied by a haunting take on Pink Floyd‘s The Wall but for various reasons – including re-editing, studio priorities and a small global pandemic – things seemed to scupper any release date to the point where even the most optimistic devotees expected it to never reach the multiplexes. But this week, over three years late and against all the odds, the film made it out… to the few cinemas in the US that are open.

The New Mutants graphic novel first appeared in 1982, created by writer Chris Claremont and artist Bob McLeod  – the concept being that Charles Xavier mistakenly believed the X-Men to have been killed and was talked into bringing together a new team of young mutants He wasn’t training them to be the heroes that the X-Men had been, but simply to let them learn the best way to live with – and use – their powers. But the team would ultimately find they had demons of their own to conquer, some quite literal. After artist Bill Sienkiewicz took over the art chores a couple of years later, the entire mood of the comic changed and it’s from this key era that the new film draws much of its inspiration: the team’s distrust of each other and the attack of a ‘demonic bear’ like creature that stalks Dani Moonstar’s dreams.

The resulting film adaptation is a mixed bag, but it’s far from the train-wreck that many predicted it might be given those delays and, quite frankly, it’s far better than the most recent X-Men movies have been, despite their bigger budgets.  Director Josh Boone, for whom this was a passion-project of sorts, creates a self-contained story, mostly taking place in one setting – the hospital/asylum and its grounds.  The source material that inspired it is rich in potential but for the movie it’s also converted into a decent origin story of sorts, again ironic because this opening New Mutants salvo is also Fox‘s last breath of X-Men related material as Marvel Studios reclaim their entire universe of characters for themselves ( a deal that also meant the film was obliged to arrive in cinemas not online). Uniquely for the franchise, it goes full-steam into the horror genre with some quite effective set-pieces and sense of foreboding. In some cases the influences are obvious – and seeing key scenes from Buffy the Vampire Slayer playing out on tv seems a little on the nose – but the production designs of both the CGI-created Demon Bear and the more practically-filmed ‘smiley-faced’  Slender-man-like stalkers each have their worth and contribute to proceedings.

The casting is decent and scattered with familiar faces. Maisie Williams is probably the most well known face after her pivotal performance in Game of Thrones and while her Rahne Sinclair isn’t quite the closeted, God-fearing ingenue of the comics (the printed page version would have swooned at the notion of any kiss never mind a same-sex soulmate) there’s enough there to make it work. Split/Glass‘ Anya Taylor-Joy catches the cynical heart of Russian teleporter and Magik-wielder Illyana Rasputin and Stranger Things‘ Charlie Heaton gives us a suitably down-to-Earth cannonballing Sam Guthrie. Henry Zaga (soon to be seen in The Stand) is fine as cocksure fired-up rich kid Robert da Costa, but it’s relative newcomer Blu Hunt as Dani Moonstar that will likely benefit the most from the exposure, a solid and assured performance that anchors the story throughout.

There’s quite a lot of exposition, but with the choices it makes over what to explain and where to leave notable gaps, the film feels less like a complete major motion picture and more like a significant television pilot, the kind of thing that you might well have seen turning up as an impressive original production or series pilot on Netflix if things had been different. In that sense, it would have been interesting to follow the characters further.

There’s no denying that the delay hurt the project and, ultimately, it’s hard to invest too heavily when you know the runes have already been cast against it, but as a curiosity piece of sorts, The New Mutants sheds its genetic legacy and carves something of its own niche, freed a little by now being a full-stop rather than a comma, but also an epilogue rather than a footnote. 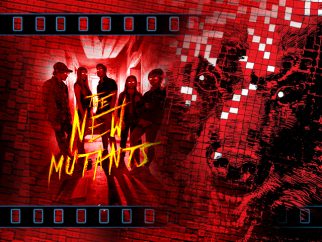 ‘The Batman’ movie goes viral (not in a good way)…