Size Matters: Is Quibi’s ‘Fugitive’ finger-food a brunch or buffet?

Quibi presents mini-episodes designed for smart devices - but how smart are the format and the content?

The very idea of bite-size dramas speaks to the modern malaise of attention-defecit disorder, the presumption that a viewer’s attention will wander after little more than the length of an ad-break or sketch on SNL.  The mission statement of Quibi is to provide such content for those who are equally too busy to even sit down and turn on their smart tv, but instead want to watch content on their smart-phones.

Now, however dispiriting that might be to an older generation, it’s not to say it can’t work: time is money and it allows a commuter to catch some entertainment on the move, on the train, in an airport lounge or in a car (if you’re not driving – though one suspects it’s a matter of time before you can fit in content between turning signals). It’s commercialism  based on a maxim that reads: ‘Look after the micro-seconds and the hours will look after themselves…‘.  It’s also perfectly true that brevity can be good:  single sentences can be more powerful than lengthy tomes and some jokes benefit by not drawing out the punchline.

However launching such a service during a year when no-one is going anywhere and where downtime is all the time, is problematic and  merely cutting something potentially bigger into smaller pieces is not the same thing as breath-length blueprinting and doing it as a gimmick rather than as necessity often draws the attention to artificial seams and pace over content a millennial case of ‘never mind the quality feel the width’ but in reverse.

Quibi‘s The Fugitive, the latest high-profile offering in its platform , is a show that could (demonstrably) work as a more conventional series on a network and speaks to exactly such brickbats and bouquets in the result.

One can almost imagine how the pitch went. A remake of The Fugitive (okay, you have our attention!)… starring Kiefer Sutherland and Boyd Holbrook (this sounds good)…  this time Sutherland’s playing the cop pursuing an innocent man (hmmmm… 24 with a twist, interesting)… a look at how modern technology can spread information for better or worse (topical – I like it!)…  a race across Los Angeles to find out the truth (sounds fine)… but we’re not going to go with the Gerad/Kimble characters (I… wait, it’s not a deal-breaker, but aren’t they iconic if this is going to be ‘The Fugitive‘ and not some generic rip-off?)… our hero is called Michelangelo (is he a turtle?) and we’re going to have new episodes every weekday (kinda expensive?)…but the episodes will last less than ten minutes  (huh?). Trust us… (oookkkkkkaayyyy…)

Arguably, the actual result is reasonable if unremarkable, the ten minute chunks arguably not much worse than the plentiful commercial breaks that pepper primetime shows. For the most part, there’s not so much artificial cliffhangering, just pauses or cuts and if you stitched the series back together into one long feature only the regular credits would reveal its origins.

Looking at the story, rather than just the format, the usual increasing suspension of disbelief is required as Holbrook’s Mike Ferro faces the kind of bad luck usually reserved for John McClane (or Jack Bauer) when it comes to being in the wrong place at the wrong time.  Sutherland’s cop, Bryce, initially seems decent and driven but increasingly over-zealous and single-minded, pursuing a theory from which he shows no reason to deviate as circumstantial evidence mounts up. He has a grudging respect for his team, though rarely shows it unless they’re personally threatened but unlike the dry with of Tommy Lee Jones ‘ Gerrard in the big-screen version,  Sutherland’s Bryce eventually descends into simply mean arrogance and bluster – and it’s hard to believe that his striking of an FBI agent would go without immediate ramifications. ( It’s telling that the show doesn’t quite know what to do with Sutherland – realising his iconic status and thus forgiving a multitude of sins and punchlines that accumulate through the minutes).

It’s interesting that the mini-series saves it’s most damning indictment for the media (both with the depiction of reporters and – without spoilers – a rather trite mea culpa epilogue). With the exception of one responsible editor, everyone else is an ego-drive ratings-hungry vulture, more than happy to present snippets of information out of context as long as they do so first. The show makes a valid observation about the ‘if it bleeds, it leads‘ attitude and the way that disinformation can spread and gather momentum, but, in truth most recognised news-outlets would not make the moral or legal decisions or jumps seen here, though twitter would likely be ablaze. However, it would have been nice to see more dissenting voices in the mix…

Reliable veteran Stephen Hopkins (Predator 2, Blown Away 24) produces and directs as if the size of the screen doesn’t matter and Sutherland and Holbrook know the turf well.  Explosions and fast-paced action inevitably look better on a big screen rather than a smart-phone but the fact that you can appreciate them better by casting from your phone to a tv screen (via the likes of Apple’s Air-Play and Google’s Chromecast) seems to circumvent and undermine the very DNA of the format.

Quibi‘s previous entries since its April launch included the similar-proportioned Survive (in which Game of Thrones‘ Sophie Turner and 24: Legacy‘s Corey Hawkins must escape the wilderness after a plane-crash and Most Dangerous Game (reworking  another classic idea of a man being hunted and paid if he survives the day) starring Liam Hemsworth and Christoph Waltz.  Like The Fugitive, they’re perfectly acceptable programming, presented in a streamlined away – though there’s certainly some advantages to binge-watching the finished series after their full daily episode release.

Fast and furious, small and smaller may be the direction of one part of the entertainment industry – but if it’s truly going to make the best use of time and money, the question will be whether the projects  need bespoke catering, or just push their delivery system. Banquet or finger-food… the consumer, as always will decide.

You can find out more about Quibi at:  https://quibi.com/ 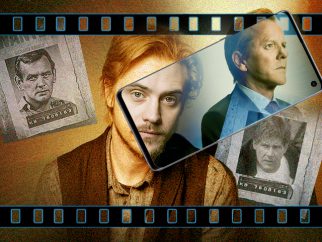 Could Marvel be Wilde about Spider-woman?