There are pigments of imagination and horror - blending monsters of all kinds in HBO's latest fantasy-edged drama...

After his father goes missing Atticus ‘Tic’ Freeman (Jonathan Majors) makes the difficult journey back to Chicago to find answers, only to find Freeman Snr. has already been absent for two weeks and was last seen in the vicinity of a sleek silver car. Though he’s disappeared before for short periods, usually alcohol-infused, it appears that Tic’s father had some newly discovered information about his late wife’s heritage and Atticus would like answers to both maternal and paternal questions.

His Uncle George (Courtney B. Vance) is the author of a guide that helps people of colour traverse the United States, pointing out things they should see and areas they should avoid – it’s still the Jim Crow era and the law can make it a criminal offence to be out after dark, with often less than legal repercussions. Together, with Tic’s childhood friend and wild-child Leti (Jurnee Smollett) and the pulp fiction horror books Tic loves so much, they set out on a drive across the country, helping fill-in some of the blanks in George’s book and Tic’s past.

If Martin Luther King Jnr. had had a nightmare, rather than a dream, there’s a chance it might look like the unfolding events and map laid out across HBO‘s Lovecraft Country, the adaptation of Matt Ruff’s 2016 novel of the same name.

The first hour-long episode of the series feels like the expanded first third of a solid horror movie, perhaps not unexpected given the involvement of Get Out/Us/Twilight Zone‘s Jordon Peele (and it’s easy to see how the project could have been a film rather than a series). After a bizarre opening that deliberately feels like an OTT pulp fiction B-movie played out in glorious technicolor and suggests that we should buckle up because anything could be possible from now on, the pace slows down dramatically and for a while the only monsters on show are the entirely human variety in what feels like a history lesson or social studies presentation. Those expecting the much-discussed inhuman monsters to make an appearance have to wait until the last ten minutes or so, where they are suddenly served up with abundance as we shift from antagonists with Uncle Tom’s Cabin mentality to The Cabin the Woods styled punishment.

It cannot go without notice that 2020 – for all its damned misery elsewhere – has boasted a magnificent banquet of edgy and sadly still timely dramas that examine man’s own inhumanity to man through the ages.  Shows filmed long before the recent Black Lives Matter marches (but perhaps receiving their greenlight with a zeitgeist already in the air) have examined the darkness of human condition through stories tinged with the fantastical. Watchmen has rightfully received a huge number of emmy nominations and was many people’s first exposure to the Tulsa Massacre of 1921, Penny Dreadful: City of Angels was a landmark achievement set in the racially-divided LA of the 1930s and both depicted cruelty and prejudice that was uncomfortable to see, but a fair depiction of their age. Lovecraft Country, set in the 1950s, goes further than either and much of the first hour is spent with the viewer shuffling uncomfortably with the overt yet casual bigotry on parade and the knowledge that such attitudes were still commonplace only a few decades ago… and might yet be making a comeback. When a bus breaks down, all the passengers get a lift to the nearest town on a farming truck, as long as they’re white. Kids make monkey gestures as the car goes by… and later our main characters are run out of a town on the wrong end of shotguns and a sheriff with an infamous lack of tolerance humiliates the travellers before planning to kill them in the woods as he has done before.

It would be easy for a monster show of any ilk to merely celebrate the iconic nature of Lovecraftian horror and stay within those writhing, tentacled boundaries, but it’s also known that Lovecraft was an overt racist and that’s not an issue this production chooses to ignore, especially given the HBO‘s remit and the Jim Crow era laws.  There are nods to works such as ‘The Outsider and Others‘ and ‘On the Creation of N*ggers‘ by Lovecraft that Atticus acknowledges are at odds with his own love of the author’s horror genre offerings. Like many an issue, it’s a a collision of contradictions waiting to be exhumed.

Jonathan Majors, recently seen in the likes of Da 5 Bloods and When We Rise, makes a compelling Atticus Freeman, torn between duty and anger and determined to find out what’s happened to his father at all costs. He dreams of being the traditional hero, overcoming trials and tribulations like the figures in the stories he reads yet is no stranger to the realities of life. Jurnee Smollett as the sassy and spirited Leti strikes the right counter-balance as someone who seems initially elf-centred and opportunistic but is more often simply rebelling as much as she can in a society that restricts her. Screen veteran Courtney B. Vance’s Uncle George, the author of a travel-guide book guiding people of colour as to where they can travel safely exhibits his own world-weary way of dealing with the obstacles he frequently faces. It’s a powerful central ensemble who breathe life into both the fantastical and mundane aspects of the tale.

Like City of Angels, music plays a part in demonstrating the pulse of the city and there’s an extended song sequence with Ruby (Wunmi Mosaku) and Leti  belting out some bluesy numbers from a street-side stage (doubling as Leti’s introduction) as Atticus opens up a fire hydrant to cool the hot summer night and giving the viewer a break from some of the more depressing elements. The soundtrack is great, the streets wonderfully blanketed in neon hues and it’s yet another example of cable shows and the high production values we’re currently privileged to watch as we glimpse days gone by before paradise became another parking lot.

This opener, entitled ‘Sundown‘, for a variety of reasons that become obvious, is another strong entry in HBO‘s arsenal (though, c’mon, how appropriate would it have been to see Cthulhu on hulu?) and will be interesting to see whether the show can find a balance between exploring the overt prejudices of the day and the monster requirements of its title. It’s a series that needs both to play their parts without becoming respectively too preachy or too absurd and so far it succeeds, also managing to infuse some humour, though never tipping it into ridicule. 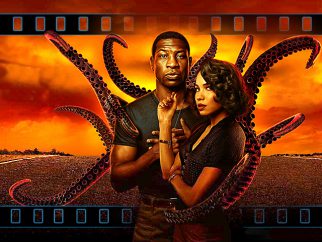