Snow covers a multitude of sins and secrets in HBO's superior sub-zero mystery...

In a series of Antarctic  expeditions acclaimed scientist Arthur Wilde (John Lynch) and his team may have uncovered a bacterial way to possibly halt global warming, but the process is long, laborious and ultimately expensive – especially if it’s going to be a practical and financial success. Each cycle of research can last six months, dividing teams between winter and summer and with the sun sometimes dipping beyond the horizon for months on end. As April comes, the base’s commander  Johan (Alexandre Willaume) is heading back into the world for a while, but his wife, fellow scientist Annika (Laura Bach) stays at the base for the next ‘shift’ with ‘The Winterers’.

Six months later, with the sun finally rising again, all contact with the base is suddenly lost and Johan heads back with a small team to find out what the problem is. The team are met with carnage – with members of the original group dead or missing. There’s no sign of Annika and the discovery of an apparently traumatised Maggie offers little immediate sense of what happened. It turns out that Maggie isn’t the only survivor, but as their testimonies slowly emerge they don’t add up and it becomes clear that in this isolated base, the people who populated it, whether they survived or not, had every reason to keep secrets.

As those secrets begin to surface, Johan is desperate to find the bigger truth and the freezing temperatures and snow can only cover them up for so long…

Already possessing all the elements it needs for a decent run, The Head‘s greatest trick is in the long-game. However well executed, it’s now rare that a drama doesn’t completely reveal and spoil its mission-statement early on. Many a television show or film is unapologetically marketed on a specific conceit that may be hidden from its main characters but not wholly from its viewing audience. A trailer or tease tees up a twist or hook on which to set out its stall and note why it’s different and eye-catching. So it’s incredibly refreshing to find something where, from episode to episode, the story builds with you often not knowing where it’s going to go… or, indeed, even what genre you’re watching for a while. Even halfway through the six-episode mini-series that makes up The Head, you could still possibly  be caught in a sf story or in a conventional murder mystery… and the only assurances you have are the predicament and the environment: a series of mysterious deaths linked to ground-breaking research in an isolated unforgiving barren winter landscape. (And even then, finding out that none of the production wasn’t filmed in the Antarctic but with exteriors in Iceland and mainly on a green-screened sound-stage in sunny Spain feels like an extra layer of deliberate misdirection and manipulation).

The story knows some traditional touchstones with which to prod the audience and enjoys doffing its pick-axe in their direction with on-screen references (The traditional start to each mission at the base sees the respective crews settling in to watch John Carpenter’s The Thing and there are mentions of Stephen King, though by the time you reach the end, other influences are apparent. The ‘head’ of the rather bizarre title is given context at the end of the first episode and given the wide range of possibilities you aren’t sure who – or what – could be responsible. Many of the characters have secrets and complex back-stories, with Willaume’s Johan sagely noting that many people who actively choose to spend months in the cold darkness of a forever-winter hinterland are hiding something, somehow already uniquely driven by unseen agendas or damaged in some way, looking for an escape or redemption. That populates proceedings with a rogue’s gallery that Agatha Christie, King or Carpenter would be happy to embrace.

Those looking for some answers before they are revealed might be able to stay ahead of story, but only just and there while it’s possible to fit certain pieces together ahead of the finale, there still are elements of ‘I didn’t see that coming…‘ scattered along the way. The story bounces between the ‘rescue’ party’s attempts to piece together how the tragedy unfolded with the actual events as they happened and also an earlier time-frame. However, the prospect of unreliable narratives work well, not quite knowing if the information you have is correct, wholly unbiased or in context and when you have more than one account of a situation, there are deliberately differing pulls on your loyalty. Each episode gives you reasons to second-guess yourself. There’s also no denying that a story  about isolation and feeling trapped – excellently paced over six episodes – works well in the middle of a pandemic when it’s equally unwise to take the environment for granted. Though there are many shots of the icy environment and the weather plays its part in communication problems, The Head‘s strengths are in building the claustrophobia within the buildings without relying too much on exterior shots except when necessary. After the first episode you just accept the geographical elements and that allows you to concentrate on character-building – or evisceration, if you prefer.

The series comes from the Pastor Brothers, whose Spanish-language Netflix thriller The Occupant debuted in March. All the episodes are directed with consummate skill by Anna‘s Jorge Dorado. The casting is strong, reflecting the international funding. Alexandre Willaume’s Johan looks like a cross between Stephen Merchant and Andrew Lincoln, commanding enough authority to make people listen to him. O’Donnelly’s Maggie balances the air of needed vulnerability with a clinical need to overcome the demands of the environment and Bach’s Annika always feel like the motivator the base needs, even if she slowly crumbles to some extent in flashback. The supporting cast includes the likes of Tomohisa Yamashita, an acting star and singer in his native Japan, if less well known internationally; Spanish actor Álvaro Morte (Money Heist, The Wheel of Time) as the secretive cook Ramón; Swedish-Italian actress Sandra Andreis as the troubled Ebba, German actor Richard Sammel as the conflicted Erik, Scottish actor Chris Reilly as heavy-weight, heavy-drinker Nils and English actor Tom Lawrence as Miles.  Amelia Hoy as the resourceful Heather has less to do and is ultimately less well developed. The dialogue is mainly in English though you’ll need the subtitles for the some of the scenes where the Finnish-based crew-members speak their native tongue.

A story that requires just enough suspension of disbelief to work, it  thrives on circumstances of the less than usual, suspects of the interesting variety and a drip-feed of information to ultimately produce a tapestry you can pull on a single thread. The Head is a great story and one worthy of an immediate binge when available in your area.

The Head is currently available  in 30 territories with HBO Asia releasing in Japan and Southeast Asia, Nordic Entertainment Group (NENT Group) releasing in Denmark, Sweden, Norway, Finland and Iceland,  OrangeTV  in Spain and will be seen in Brazil on the streaming platform Globoplay, As yet there is no firm broadcast date details for the UK and North America. 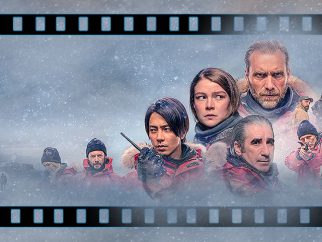